Baudouin I of Belgium

Baudouin I of Belgium 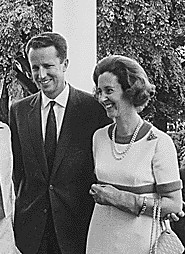 Baudouin I ( _fr. Baudouin Albert Charles Léopold Axel Marie Gustave or Dutch: Boudewijn Albert Karel Leopold Axel Marie Gustaaf) ( – ) reigned as King of the Belgians from 1951 to 1993. He was the eldest son of King Leopold III (1901-1983) and his first wife, (1905-1935). "Baudouin" is the French form of his name, which is mostly used outside of Belgium; his Dutch name is "Boudewijn". Very rarely his name is anglicized as "Baldwin".

Ascent to the throne

Baudouin was born in , nr , , in . On his father Leopold III requested the Belgian Government and the Parliament to approve a law delegating his royal powers to his son, Prince Baudouin, who took the constitutional oath before the United Chambers of the Belgian Parliament as Prince Royal on . He ascended the throne and became the fifth King of the Belgians upon taking the constitutional oath on , one day following his father's abdication.

Part of Leopold III's unpopularity was the result of a second marriage in 1941 to , an English-born Belgian commoner, later known as Princess de Réthy. More controversial had been Leopold's decision to surrender to Nazi Germany during , when Belgium was invaded in 1940; many Belgians questioned his loyalties, but a commission of inquiry exonerated him of treason after . Though reinstated in a plebiscite, the controversy surrounding Leopold led to his .

On , , Baudouin was married in to Doña Fabiola Fernanda María de las Victorias Antonia Adelaida de Mora y Aragón, a former and a of . Queen Fabiola is immensely popular for her good cheer, personal modesty, and devotion to social causes. The Belgian royal couple had no children, which was a source of much sadness in the marriage, and would provide a partial reason why the King was so uncomfortable with the topic of . When in 1990, the Belgian government passed a law drastically liberalising abortion, King Baudouin could not bring himself to sign.

There was some concern among politicians close to the King that he might actually be in love with his stepmother, Princess Lilian, suspicions fueled by secret recordings of telephone conversations between the two. The post-wedding actions of Baudouin's father and stepmother only increased speculation; they briskly moved out of the royal palace at and reportedly broke off relations with Baudouin for some time.

During Baudouin's reign the colony of was given its independence, and the King personally attended the festivities; he gave a speech that was widely seen as insensitive to the atrocities in the Congo, and the speech received a blistering response by Congolese Prime Minister . Fact|date=September 2008

In 1976, on the 25th anniversary of Baudouin's accession, the was formed, with the aim of improving the living conditions of the Belgian people.

Baudouin also made some visits to the Spanish leader , a family friend of his Queen, Fabiola.

Baudouin was a deeply religious . Some thought after his accession to the throne that he wanted to abdicate, in order to become a priest. Royal advisers suggested at the time that the Belgian monarchy would probably not survive two abdications in a row. Through the influence of Leo Cardinal Suenens, Baudouin participated in the growing and regularly went on pilgrimages to the French shrine of .

In 1990, when a law, submitted by and , liberalising Belgium's laws was approved by Parliament, he refused to give , an unprecedented act in Belgium, although without much significance since (as in most modern constitutional and popular monarchies) Royal Assent has long been a formality. Because of his religious convictions, Baudouin asked the Government to declare him temporarily unable to reign so that he could avoid signing the measure into law. [http://www.time.com/time/magazine/article/0,9171,969868,00.html] The Government under complied with his request on , . According to the provisions of the , in the event the King is temporarily unable to reign, the Government as a whole fulfills the role of . All members of the Government signed the bill, and the next day (, ) the Government declared that Baudouin was capable of reigning again. (It is a point of contention whether Baudouin for two days so as not to have to approve the law, while still allowing abortions to be legalised in Belgium, or whether he was merely suspended for the day.)

He reigned for 42 years until dying of heart failure on , in the Villa Astrida in , in the south of . His death was unexpected, and sent much of Belgium into a period of deep mourning. It was a mark of great affection and respect for King Baudouin that Queen Elizabeth II attended the funeral in person; by tradition the British monarch attends only those funerals which are of close family members (they were only third cousins once removed) or such politicians as prime ministers who die while in office.

King Baudouin was interred in the royal vault at the Church of Our Lady, Laeken Cemetery, .

Baudouin was succeeded by his younger brother, who became King Albert II.

After Leopold's abdication in 1951, Baudouin had brought stability, but not harmony, to a country gripped by a struggle between Dutch-speaking Flanders and French-speaking Wallonia. At the time of his death Belgium had begun a far-reaching federalisation that made the maintenance of Belgian unity questionable. The wave of mourning over Baudouin's passing brought Flemings and Walloons together in support of the monarchy, and there was no support for a deputy who shouted in favour of a republic before Albert took his oath. It was thought by some that the rush to full separation into independent states, anticipated for early in the next century, would be halted by the new king's influence and the resurgent commitment to the dynasty. [http://www.bookrags.com/biography/albert-ii/]