The Blow Monkeys are a British new wave band that formed in 1981 as a new wave-oriented act. The first single, "Live Today Love Tomorrow" was released in 1982.[1] They subsequently recorded more commercial pop rock hit makers, and finally became a dance group, shortly before splitting up at the beginning of the 1990s. They broke through with the UK and US Top 40 hit "Digging Your Scene", which hit #14 on the Billboard Hot 100 chart in August, 1986.[2] They went on to place eleven singles and four albums in the UK charts between 1986 and 1990.[3]

In late 2007, the original band members reunited, releasing a new album and going on tour in 2008.

Fronted by lead singer, songwriter, guitarist and piano player Dr. Robert (born Bruce Robert Howard, 2 May 1961, Norfolk, England)[4] the group formed in 1981, upon Howard's return to the United Kingdom, after spending his teen years in Australia. The other members are Mick Anker on bass guitar, Neville Henry on saxophone, and Tony Kiley on drums.[4] 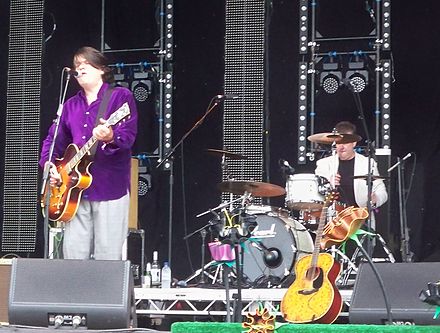 The Blow Monkeys at Guilfest 2011

In 1984, they released their debut album, Limping for a Generation, characterized by a dark mood, and a mix of pop rock and new wave, but their first hit came two years later, in 1986, with "Digging Your Scene", from their second album, Animal Magic (which reached number 21 in the UK Albums Chart). The single attracted attention for the topical lyrics, dealing with the AIDS-fuelled backlash against gay people.[5] It peaked at number 14 in the Billboard Hot 100 chart, and number 7 on the Hot Dance Club Play chart. In addition, it reached a high of number 12 in the UK Singles Chart, number 24 in Italy and number 25 in Germany.

In January 1987, She Was Only a Grocer's Daughter, the band's third album was released; it reached number 20 in the UK, thanks to its biggest hit, "It Doesn't Have To Be This Way", which reached number 5 in the UK (and number 28 in Italy), although it never charted in the United States. However, it did feature in the film, Police Academy 4: Citizens on Patrol.

Another noteworthy track, "You Don't Own Me" was used on the platinum selling Dirty Dancing soundtrack.

Outside of the group (though actually included on their fourth album, Whoops! There Goes the Neighbourhood), a successful single release by Robert Howard was "Wait", that featured early Chicago House diva, Kym Mazelle, on female lead vocals. The record was an early British recording in the subgenre dubbed UK garage. The track reached number 7 in the UK chart. It would later re-appear on the Blow Monkeys' first greatest hits album, Choices - The Singles Collection, their highest-charting record, reaching Number 5 in the UK Albums Chart in 1989.

The band split up in late 1990,[1] shortly after the release of their fifth album, Springtime for the World (an EP of the same name also came out, collecting all three singles from the album). After briefly recording with Dee C. Lee, as Slam Slam, Dr. Robert went solo. He contributed to Paul Weller's solo debut album, and co-wrote material with both Weller and Lee. Another notable collaborator was Beth Orton.

On 18 November 2007, the original band members announced the reunion of the Blow Monkeys, as well as a new album Devil's Tavern and a tour in 2008. The album was funded by the pre-orders placed by fans. The release date for the album was 8 September 2008. Q magazine reviewed the album by saying, "Their first album in 18 years still finds the frontman in fine voice; Robert continues to sound like he dresses only in velvet and smokes cigarillos".[6]

In June 2009, the band released a special edition double digipack CD and DVD of their performance at the 100 Club in London. It featured the original band performing fifteen songs including: "Digging Your Scene", "It Doesn't Have To Be This Way" and "Wait"; as well as other tracks from the band's earlier work along with a few new songs from Devil's Tavern.

In January 2011 the band released Staring at the Sea,[7] with "Steppin' Down" as the first single issued.