Operation Arctic Fox (from the German Operation Polarfuchs) was the codename given to a campaign by German and Finnish forces during World War II against Soviet Northern Front defences at Salla, Finland in July 1941. The Operation was part of a larger Operation called Operation Silver Fox (Silberfuchs) which aimed in capturing the vital port of Murmansk. The operation was conducted parallel to Operation Platinum Fox (Platinfuchs) in the far north of Lappland. The principal goal of Operation Arctic Fox was to capture the town of Salla and then to advance in direction of Kandalaksha, to block the route to Murmansk.

Salla was one of the areas occupied during the Soviet invasion of Finland in 1939. The German XXXVI Corps, consisting of both German and Finnish troops, carried out Operation Arctic Fox as part of the larger Operation Silver Fox (Silberfuchs), which aimed at capturing the Soviet port at Murmansk.

This was part of the overall attack on the Soviet Union, Operation Barbarossa, and was, for the Finns, part of the initial phase of their Continuation War (Jatkosota). 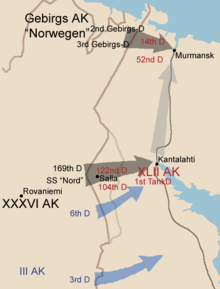 In the preceding Operations Blue Fox 1 and Blue Fox 2 (Blaufuchs I and Blaufuchs II) the German units were transferred into the Arctic. The 169th Division was shipped directly from Stettin to Oulu and then on to Rovaniemi by train. The SS-Infantry Kampfgruppe Nord was created as a mixed unit of the 6th and 7th Motorized SS Infantry Regiments, two artillery battalions and one reconnaissance battalion. This unit was mostly untrained and more a police unit and therefore unsuited for harsh arctic warfare.[3] The unit was later renamed to 6th SS Mountain Division Nord and led by General Demelhuber. While the unit was transferred, a transport ship caught fire killing some 110 troops.[3] Attached to the German and Finnish force were 2 small Panzer units: The Panzer-Abteilung 211 which consisted of captured French tanks[4] and Panzer-Abteilung 40 which consisted mainly of Panzer I's and Panzer II's.[5]

The goal of the operation was to take Salla and then to proceed along the railway eastwards, to capture Kandalaksha and to cut the Murmansk line. For this the Finnish 6th Division had to capture Allakurtti and Kayrala from Kuusamo from the south of Salla. From the north the 169th Division had to attack frontal against the Soviet defenses at the Tennio River. The 6th SS Mountain Division had to advance along the Salla - Kandalaksha road. Further south, the Finnish III Corps with the Finnish 3rd Division supported the attack. The Finnish III Corp's units were placed under German High Command for the operation. The ultimate goal for the Finnish forces was to cut the Murmansk supply-lines at Loukhi and Kem. For this the Finnish 3rd Division was splitted into two forces, Group J and Group F. Group J was ordered to advance from Kuusamo and take Kestenga, while Group F was to attack from Suomussalmi and capture Ukhta.[6]

The offensive commenced on 1 July 1941 with the Finnish 6th Division crossing the frontiers on midnight. Several hours later the 6th SS Mountain Division Nord started its frontal assault against the Soviet line, but was not able to make any gains. In the next days the SS Division tried repeatedly to break through the Soviet lines, but all attempts failed.[7] It was not until the 169th Division supported the attack, that the Germans broke through the Soviet defenses on 6 July and captured Salla. A heavy Soviet counterattack drove them back out of the town, but on 8 July a general Soviet retreat of the 122nd Rifle Division allowed the Germans to capture the town again. The Soviets had to left most of their artillery behind and in the heavy fighting some 50 Soviet tanks were destroyed. Afterwards, the SS Division Nord pursued the 122nd Rifle Division toward Lampela, while the 169th Division turned toward Apa and the Lake Kuola.[7]

On 9 July the 169th Division reached the town of Kayrala, but was thrown back by strong Russian counterattacks. All 3 Soviet Division's now formed a formidable defense line around the lakes, as well as the towns of Allakurtti and Kayrala. The German advance stalled, facing difficulties with arctic forrest fighting. On 16 July von Falkenhorst, commander of Army Norway, arrived and pressured Feige to renew the offensive. On 27 and 29 July, the corps made two separate attacks against the Soviets which led to nothing.[8]

While the German advance stalled, the Finnish 3rd Division in the south was making good progress. The Division's first opponent was the Soviet 54th Division. Group F advanced very fast 64 km (twice as many as the Germans in the whole July) through rough terrain to the Vyonitsa River, where it destroyed several encircled Soviet units from 10 to 19 July. Group J advanced to the canal between the Lake Pya and Lake Top. On 30 July they moved across the river and defeated the Soviet forces in the region. On 7 August the Finns captured Kestenga (Kiestinki) after fierce fighting. The Soviets transferred additional troops (the 88th Rifle Division as well as the independent Grivnik brigade) into the region. Group J's advance east of Kestenga stalled, as well as Group F's drive on Ukhta. The German command now decided to support Group F's thrust on Ukhta and transferred the SS Division Nord south to support Group F of the Finnish 3rd Division. On 14 October it was decided to halt the Ukhta-offensive and instead support Group J's advance east of Kestenga. On 30 October the offensive began and after two days a Soviet regiment was encircled. Instead of continuing the offensive, the Finns cleaned the perimeter which lasted until 13 November. Until that the Finnish 3rd Division had killed 3,000 Russians and captured 2,600. Three days later, the Finns decided not continue the offensive, because of an overstretched frontline.[9]

As addition, a Finnish jaeger (jääkäri) battalion was inserted into the largely unoccupied 240 km (150 mi) area between the Murmansk and Kandalaksha directions of advance and was able to cut the sole railway connecting Kandalaksha with forward Soviet positions at the Nyam station. This meant that, for two weeks, the Soviet 122nd Rifle Division did not receive any supplies and had to live off its field dumps.[2]

During the successful advance of the Finnish forces in the south, XXXVI Corps also prepared for a new attack. At the beginning of August 1941, the Finnish 6th Division headed the renewed drive of the XXXVI Corps. The 169th Division followed. In the face of the new German thrust, the Soviets retreated to the Tuutsa River, lost Allakurtti and later withdrew to the Voyta River, where the old 1939 Soviet border fortifications were situated. On 6 September XXXVI Corps made a frontal assault against the Soviet lines, but made only slow progress. The Soviets now formed a strong defense line from Lake Verkhneye Verman to Tolvand - the so-called VL or Verman Line. The Soviets also received massive reinforcements, while XXXVI Corps was exhausted after months of constant warfare. The German casualties were heavy and the attack was finally called off at the end of September. With the Finns stopping their offensive in the south on 17 November too, this marked the end of Operation Arctic Fox.[10]

During Operation Arctic Fox the Germans and Finns were able to make some ground and took Salla as well as Kestenga, but overall the operation failed in terms of its strategic goals, as neither Murmansk nor the railway at Kandalaksha was captured. The XXXVI Corps was unsuited, ill-trained and unprepared for arctic warfare and therefore made only small progress while suffering heavy casualties. The Finnish units, especially the 6th Division of the III Finnish Corps, made good progress and inflicted heavy casualties on the Soviet forces, but due the limited resources and an overstretched frontline the Finnish commander Hjalmar Siilasvuo ordered to not proceed with the offensive, possibly after consultation with Mannerheim not to get too deeply involved in Germany's war.[11]