The Adventure of the Musgrave Ritual

The Adventure of the Musgrave Ritual

"The Adventure of the Musgrave Ritual" is a short story by Arthur Conan Doyle, featuring his fictional detective Sherlock Holmes. The story was originally published in Strand Magazine in 1893, and was collected later in The Memoirs of Sherlock Holmes. Unlike the majority of Holmes stories, the main narrator is not Doctor Watson, but Sherlock Holmes himself. With Watson providing an introduction, the story-within-a-story is a classic example of a frame tale. It is one of the earliest recorded cases investigated by Holmes, and establishes his problem solving skills.

"The Adventure of the Musgrave Ritual" shares elements with two Edgar Allan Poe tales: "The Gold Bug" and "The Cask of Amontillado".

In 1927, Conan Doyle ranked the story at 11th place on his top 12 Holmes stories list. The story did better in a 1959 chart produced by the Baker Street Journal, ranking 6th out of 10.

In the story, Holmes recounts to Watson the events arising after a visit from a university acquaintance, Reginald Musgrave. Musgrave visits Holmes after the disappearance of two of his domestic staff, Rachel Howells, a maid, and Richard Brunton, the longtime butler. The pair vanished after Musgrave had dismissed Brunton for secretly reading a family document, the Musgrave Ritual. The Ritual, which dates from the 17th century, is a riddle set in verse form. It reads:

Musgrave caught Brunton in the library at two o'clock one morning. Not only had he unlocked a cabinet and taken out the document in question, but he also had what looked like a chart or map, which he promptly stuffed into a pocket upon seeing his employer watching him. Brunton besought Musgrave not to dishonour him by dismissing him, and asked for a month's time to invent some reason for leaving, making it seem as though he was leaving of his own accord. Musgrave granted him a week. The reader learns later that Brunton wanted the time for something else.

A few days later, Brunton disappeared, leaving behind most of his belongings. His bed had not been slept in. No sign could be found of him. The maid, Rachel Howells, who was also Brunton's former lover, had an hysterical fit when asked about Brunton's whereabouts, repeating over and over that he was gone. She was in such a state that another servant was posted to sit up with her at night. Eventually, however, the guarding servant nodded off one night, and the hysterical Rachel Howells escaped through a window. Her footprints led to the edge of the mere, and ended there. Musgrave had the mere dragged, but only a sack containing some rusty mangled bits of metal, and some coloured stones or glass was found. Rachel Howells was never heard from again. 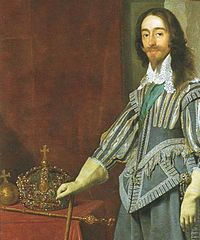 The State Crown of Henry VII of England included in a portrait of Charles I of England by Daniel Mytens prior to its destruction in 1649.

Holmes looked upon the case not as three mysteries, but as one. He considered the riddle of the ritual. It was a meaningless, absurd tradition to Musgrave, and apparently to all his ancestors going back more than two centuries, but Holmes — and Brunton, too, Holmes suspected — saw it as something very different. He quickly realized that it was a set of instructions for finding something. Ascertaining the height of the oak, which was still standing, and the position of the elm, which was now gone, Holmes performed a few calculations and paced out the route to whatever awaited him, with Musgrave now eagerly following him.

It was quite instructive to Holmes that Brunton had recently asked about the old elm tree's height as well, and that he was apparently quite intelligent. 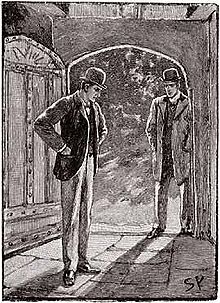 Holmes in the calculated place.

The two men found themselves inside a doorway, momentarily disappointed, until they realized that there was the last instruction, "and so under". There was a cellar under where they were standing, as old as the house. Finding their way into it, they saw that the floor had been cleared to expose a stone slab with an iron ring on it. Holmes thought it wise to bring the police in at this point. He and a burly Sussex policeman manage to lift the slab off the little hole that it was covering, and inside, they found an empty, rotten chest, and Brunton, who had been dead for several days. There were no marks on him. He had likely suffocated.

Holmes then put everything together for his rather shocked client. Brunton had deduced the ritual's meaning, at least insofar as it led to something valuable. He had determined the elm tree's height by asking his master, had paced out the instructions — and Holmes had later even found a peg hole in the lawn made by Brunton — had found the hiding place in the old cellar, but then had found it impossible to lift the stone slab himself. So, he had been forced to draw someone else into his treasure hunt. He had unwisely chosen Rachel Howells, who hated him. The two of them could have lifted the slab up, but they would have needed to support it while Brunton climbed down to fetch the treasure. Did Rachel deliberately kick the support away, sealing Brunton in, thus murdering him-or did the slab fall by itself and she was only guilty of not getting help to her unfaithful lover? It explained a great deal about her subsequent behaviour.

As to the relics found in the bag retrieved from the mere, Holmes examined them and found that the metal parts were gold and the stones were gems. He believed that it was no less than King Charles I's gold crown, being kept for his successor (who, as it turned out, was Charles II). The ritual had been a guide to retrieving this important symbol: Reginald confirms that one of his ancestors, Sir Ralph Musgrave, was a king's man. Holmes theorized that the original holder of the ritual had died before teaching his son about the ritual's significance. It had thus become nothing more than a quaint custom for more than 200 years.

The story was originally published in the Strand Magazine in May 1893, with illustrations by Sidney Paget. It was later collected in The Memoirs of Sherlock Holmes. The Strand's text of the Ritual did not specify the month in which the shadow of the oak should be measured (the shadow would be longer in winter), but a couplet was added for the Memoirs identifying the month as the "sixth from the first".[2]

T. S. Eliot stated that he adapted part of the Ritual in his 1935 verse play Murder in the Cathedral as a deliberate homage.[2]

The Basil Rathbone/Nigel Bruce series of films loosely adapted the story in Sherlock Holmes Faces Death, though the ritual was completely re-written to represent a chess game played on the floor of the Musgrave mansion floor.

The Granada Television adaptation with Jeremy Brett deviated from the original by including Watson in the adventure. In addition, the story features an actual oak tree, which Holmes describes as "a patriarch among oaks, one of the most magnificent trees that I have ever seen." In the Granada film version, however, Holmes utilizes a weathervane in the shape of an oak perched on top of the Musgrave mansion to solve the mysterious ritual. Furthermore Musgrave is shown to be older than Holmes; in the original story Musgrave was a college contemporary of Holmes. At the very end of the teleplay, Rachel's body is shown to have been found after having floated up from the mere. Further, the 12th line of the ritual is adapted to suit the scenery and the 5th and 6th lines are omitted.

Works related to The Musgrave Ritual at Wikisource

Media related to The Musgrave Ritual at Wikimedia Commons