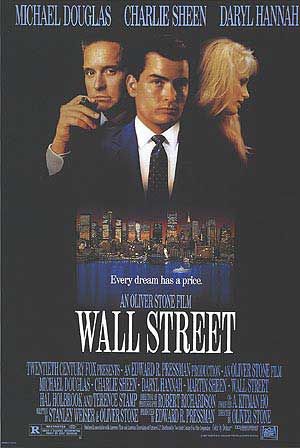 "Wall Street" is a 1987 American film directed by and features as a young stockbroker desperate to succeed and a wealthy but unscrupulous () whom he idolizes.

Douglas won an Academy Award for Best Actor in a Leading Role. 's performance was not as well received and earned her a Razzie for Worst Supporting Actress. The film has come to be seen as the archetypal portrayal of 1980s excess, with Douglas advocating "greed, for lack of a better word, is good".

An ambitious young stockbroker, Bud Fox (played by ), is desperate to get to the top. He schemes to become involved with his hero, the extremely successful but unscrupulous ().

Gekko is a ruthless and legendary Wall Street player whose values couldn't conflict more with those of Bud's father Carl (). Bud, caught in the middle, pitches his father's company to Gekko with the intentions of saving it while everyone gets rich in the process. Carl is a maintenance chief at a small airline, Bluestar, and learns it will soon be cleared of a safety violation after a previous crash. The ruling will bring the airline out from under government suspension, allowing it to expand its business.

Fox tips off Gekko with this inside information. An appreciative Gekko takes Fox under his wing but compels him to unearth new information by any means necessary. Bud becomes wealthy, enjoying Gekko's promised perks, including a fancy condo and a trophy blonde, interior decorator Darien ().

Things change when Gekko decides to sell off Bluestar's assets, an act that would leave Carl and the entire Bluestar staff out of work. Betrayed by Gekko and wracked with the guilt of being an accessory to Bluestar's destruction, Bud resolves to disrupt Gekko's plans. He angrily breaks up with Darien, who refuses to plot against Gekko, a former lover and the architect of her career.

Bud devises a plan in which he will manipulate Bluestar's stock value so that Gekko will decide to sell off his stock in the company. It will then be picked up at a lower price by Gekko's rival, corporate raider Sir Lawrence Wildman (), who will become the airline's new majority shareholder. Gekko, realizing that his stock is plummeting, lashes out furiously at Fox and finally decides to dump his remaining interest in the company. Only later does Gekko learn that Fox engineered the entire scheme.

Bud triumphantly goes back to work the following day, where everyone is curiously in a somber mood. He enters his office where he is greeted by law enforcement officials and representatives of the . Bud is placed under arrest for violating federal securities laws, is handcuffed and led out of the office in tears.

Sometime later, Fox confronts Gekko in Central Park. Gekko viciously assaults Fox, but not before mentioning several of their illegal business transactions. Fox is wearing a wire, and the police presumably will use this recording as state's evidence, although Gekko's fate is left ambiguous (though writer Stanley Weiser wrote recently in the L.A. Times that Gekko does, in fact, go to jail). The film ends with Bud arriving at the courthouse, ready to atone for his crimes and greed.

After the success of "Platoon", Stone wanted film school friend and screenwriter Stanley Weiser to research and write a screenplay about in the 1950s.

Weiser had no prior knowledge of the financial world and immersed himself in researching the world of stock trading, junk bonds and corporate takeovers. He and Stone spent three weeks visiting brokerage houses and interviewing investors. Reportedly, Bud Fox is said to be a composite of Owen Morrisey, who was involved in a $20 million insider trading scandal in 1985, , , and others.

Stone met with about playing Bud Fox, but the director had already committed to Charlie Sheen for the role. Michael Douglas had just come off heroic roles like the one in "" and was looking for something dark and edgy. The studio wanted to play Gekko but he was not interested. Stone initially wanted but the actor passed, so the director went with Douglas despite having been advised by others in not to cast him. Stone remembers, "I was warned by everyone in Hollywood that Michael couldn't act, that he was a producer more than an actor and would spend all his time in his trailer on the phone". But the director found out that "when he's acting he gives it his all".

Stone cast as Bud Fox’s materialistic girlfriend, but she had problems relating to her character and struggled with the role. The director was aware early on that she was not right for it. "Daryl Hannah was not happy doing the role and I should have let her go. All my crew wanted to get rid of her after one day of shooting. My pride was such that I kept saying I was going to make it work". Stone also had difficulties with , who made her opinions known that Hannah should be fired and that she should play that role instead. Young would show up to the set late and unprepared. She did not get along with Charlie Sheen, which caused further friction on the set. In retrospect, Stone felt that Young was right and he should have swapped Hannah's role with hers.

Stone wanted to shoot the movie in and that required a budget of at least $15 million, a moderate shooting budget by 1980s standards. The studio that backed "Platoon" felt that it was too risky a project to bankroll and passed. Stone and producer took it to and filming began in April 1987 and ended on July 4.

According to Stone, he was "making a movie about sharks, about feeding frenzies. Bob [director of photography Robert Richardson and I wanted the camera to become a predator. There is no letup until you get to the fixed world of Charlie’s father, where the stationary camera gives you a sense of immutable values". The director saw Wall Street as a battle zone and "filmed it as such" including shooting conversations like physical confrontations and in ensemble shots had the camera circle the actors "in a way that makes you feel you're in a pool with sharks".

Stone admits that he had "some problems" with Sean Young but was not willing to confirm or deny rumors that she walked off with all of her costumes when she completed filming.

"Wall Street" was released on , in 730 theaters and grossed $4.1 million on its opening weekend. It went on to make $43.8 million in North America.

The film was well-received critically. It has an 81% rating on and a 56 metascore on . In his review for the "", praised Douglas' work as "the funniest, canniest performance of his career".

Over the years, the film's screenwriter Stanley Weiser has been approached by numerous people who told him, "The movie changed my life. Once I saw it I knew that I wanted to get into such and such business. I wanted to be like Gordon Gekko". In recent years, Stone was asked how the financial market depicted in "Wall Street" has changed and he replied, "The problems that existed in the 1980s market grew and grew into a much larger phenomenon. is a fiction, in a sense, in the same way that Gordon Gekko's buying and selling was a fiction . . . Kenny Lay--he's the new Gordon Gekko".

A 20th Anniversary Edition was released on , . New extras include an on-camera introduction by Stone, extensive deleted scenes, "Greed is Good" featurettes, and new on-camera interviews with Michael Douglas and Martin Sheen.

On , , the "" reported that a , "Money Never Sleeps", is currently in . will reprise his role as Gordon Gekko, but both Charlie Sheen and Oliver Stone will be absent from the sequel.