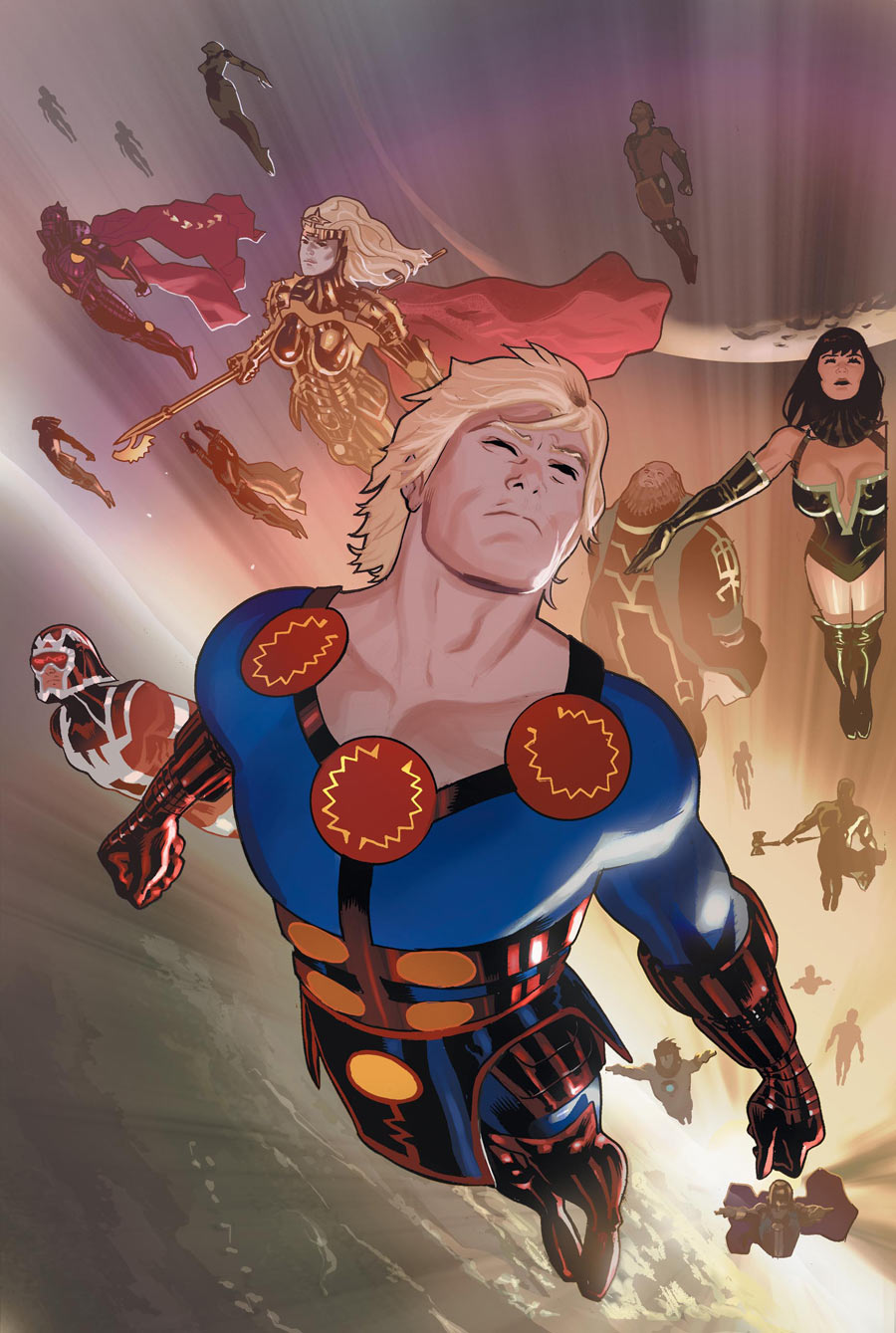 The Eternals are a fictional race of s in the universe. They are an offshoot of humanity created on by the alien Celestials, and wage war against their counterparts, the Deviants. The Eternals were created by and made their first appearance in "The Eternals" #1 (July 1976).

In 1970, Kirby left Marvel Comics to work at , where he began the saga of the , an epic story involving mythological and science fiction concepts, and planned to have a definite ending. However, the saga was left incomplete after the cancellation of the titles involved. Kirby began "The Eternals "when he returned to Marvel. The Eternals' saga was thematically similar to the New Gods', but the series was eventually canceled as well without resolving many of its plots, particularly The Celestials' judgment over humanity (see Fictional Biography below.)

Writers and brought the Eternals into official continuity in a long storyline in the Thor comic book series that climaxed in "Thor "#300, resolving those lingering plotlines.

Since then, the Eternals (and the mythology connected to them) have appeared or been mentioned in numerous Marvel comics. In particular, the Celestials' experiment on humanity has been used to explain how certain humans can develop super-powers. The gods of Titan (created by ) were later retconned as being Eternals as well.

The Eternals themselves have been featured on several limited series and specials, but since the cancellation of Kirby's original run have not had an until 2008 (see Eternal Titles below). 's 2006 limited series brought the Eternals back and up to date, with the most recent ongoing series from Charles and . [ [http://www.comicbookresources.com/?page=article&id=10960 CCI: Charles & Daniel Knauf: Waking Up from An Eternal Slumber] , , July 27, 2007] [ [http://www.comicbookresources.com/?page=article&id=16764 Eternal Glory of the King: Knaufs talk “Eternals”] , , June 11, 2008]

When the Celestials visited Earth five-million years ago and performed genetic experiments on early proto-humanity, they created two divergent races: the long-lived Eternals, and the genetically unstable and monstrously grotesque Deviants. These experiments also lead to the capacity for super-powered mutations in humans. They also performed this experiment on other planets (such as the and homeworlds) with similar results.

Despite looking human, Eternals are much more long-lived (but were not originally fully immortal) and that kept them from having much contact with their human cousins. Eternals have a low birth rate; they can interbreed with humans but the result is always a normal human. Despite this, the Eternals have in general protected the human race, especially from the Deviants, with whom they've always had an enmity. The Eternals also developed advanced technology.

Long ago, a civil war broke out amongst the Eternals over whether to conquer the other races, with one faction led by Kronos and the other by his warlike brother, Uranos. Kronos' side prevailed, and Uranos and his defeated faction left Earth and journeyed to Uranus where they built a colony. Some of Uranos' group soon tried to return to Earth to re-kindle the war, but they were attacked by a passing Kree ship and forced to land on Saturn's moon Titan. There they built another colony. (Experiments performed by Kree scientists on a captured Eternal lead them to go to Earth and perform their own genetics experiments on a group of humans, thus creating the .) One day, Kronos' experiments in cosmic energy caused a catastrophic release of energy throughout the Eternals' city, Titanos, destroying it, activating latent genes in the Eternals and disintegrating the scientist's body. The Eternals now found they could channel large quantities of cosmic energy themselves, granting them near-godlike power. The accident left Kronos in an immaterial state, so a new leader had to be chosen. For the first time, the Eternals merged into a single being, the , to decide which of Kronos' sons, or should be the new leader. Zuras was chosen, and Alars chose to leave Earth to avoid causing another civil war, and journeyed to Titan.

There he found that a war (allegedly caused by the ) had erupted on Titan and wiped out all but one member, a woman named Sui-San. Alars fell in love with her, and in time they repopulated Titan. Due to the mix of activated genes from Alars and unactivated ones from Sui-San, these new Titanian Eternals are not as powerful or immortal as Terran Eternals, but are more powerful and longer-lived than the earlier pre-civil war Titanian Eternals.

While Zuras ruled, three new Eternal cities were built. The first was Olympia, located in the mountains of Greece, near the main portal between the Earth dimension and the Olympians' home dimension, which lead many ancient Greeks to confuse some of the godlike Eternals with members of the Olympian pantheon. Eventually, an agreement was reached with the gods where some Eternals, such as , would impersonate the Olympians before their worshipers. The other two Eternal cities were Polaria (located in Siberia) and Oceana (in the Pacific).

18,000 years ago, the Celestials returned to Earth. The Deviants attacked them, but the Celestials counterattacked, resulting in the sinking of Mu and Atlantis, and much worldwide havoc. The Eternals helped rescue many humans. An Eternal named Valkin was entrusted by the Celestials with an artifact of great power for safekeeping.

1,000 years ago, the Asgardian god Thor encountered some Eternals, but the encounter was erased from his mind, to prevent him from learning about the Celestials, who were about to return to Earth. An Eternal named became the Celestial's spokesperson, and put himself to sleep when the Celestials left, to wait for their return 1,000 years later to judge humanity.

During the early 20th century, a human scientist made contact with the Uranian Eternals and was taken to live with them along with his young son, who would later become Marvel Boy. The Uranians were eventually killed by . After mankind split the atom, some Eternals joined with some humans and Deviants to form the to decide what to do about it. Some Eternals, such as Makkari, were also active as , or living amongst humans, keeping their true nature hidden. The Eternals also helped to move the Inhumans' city to the Himalayas to keep it hidden.

At some point, of the Eternals of Titan nearly destroyed their colony, but they rebuilt it, and would help Earth's heroes to oppose him on several occasions.

They were forced to dissolve back into Eternals by the Celestials, and the shock of the attack killed Zuras. Before his spirit fully left the material plane, he instructed his daughter Thena to take his people to explore space. Most of the Eternals did so in the form of a Uni-Mind, but a handful - those most heavily involved in Earthly affairs - remained behind on Earth. Since then, the Eternals have helped Earth's heroes, particularly the Avengers, against several menaces. They also discovered the existence of the Titanian Eternals.

Recently, the Eternals have begun reappearing on Earth in 's new take on the immortal beings. Most seem to have no memory of their own history and abilities, except Ikaris, and no records of their previous appearances remain. Apparently the Eternal known as Sprite, angered at having to remain an eleven year old and unable to grow any further, managed to induce collective amnesia on the Eternals as well as distort their perceptions of history. This can possibly be seen as Gaiman's attempt to retcon the characters; early stories as well as officially published statistics portrayed most of the current generation of Eternals - such as Ikaris and Thena - as being "only" several tens of thousands of years old but Gaiman's run describes them as being closer to a million years old.

A group of deviants manage to kidnap Makkari, using him to awaken the . Upon awakening, he decides to judge humanity. The Eternals, realizing that they cannot stop him, leave him be. The Eternals then embark on a quest to go and recruit the other members who have similarly forgotten their true selves due to Sprite's trickery.

Due to the cosmic energy that suffuses an Eternal's body and the nigh-unbreakable mental hold they hold over their bodily processes, the Eternals of Earth are effectively immortal. They live for millennia, do not fatigue from physical exertion, are immune to and , and are unaffected by environmental extremes of cold and heat. Most cannot be injured by conventional weaponry, and even if they are, an Eternal can rapidly regenerate any damage as long as they are able to retain their mental hold over their bodies; this mental bond can be broken however. In the 2006 series it was also stated that Eternals are able to absorb oxygen directly from water, and therefore cannot drown. In the same series, Ikaris was plunged into molten metal and experienced great pain, but no physical injury, which the Deviants attributed to a forcefield which protects Ikaris even when unconscious. It is unclear if all Eternals share this degree of protection.

At one time, the official limit to the Eternals' durability was such that they could be permanently destroyed by dispersing their bodies' molecules over a wide area [Official Handbook of the Marvel Universe, Volume #1, Issue 4] .However, this degree of extreme durability was recently ret-conned and increased to a much greater degree; as demonstrated in the 2006 Eternals limited series

This same cosmic energy can be channeled for a number of superhuman abilities. All Eternals are capable of:

* Superhuman strength. The limits of their strength can be increased as a result of years of focusing some of their energy towards that purpose.
* Projecting concussive blasts and/or blinding flashes of energy from their eyes and hands.
* Flying (and levitate others.)
* Reading minds.
* Generating illusions.
* Teleporting vast distances, though doing so leaves most Eternals momentarily fatigued or dazed.
* Transmuting objects, altering both their shape and composition. This ability is very taxing to most Eternals.

*In addition, groups of Eternals, as few as three at a timeEternals (2006), Issue #6] , can initiate a transformation into a gestalt being called the , a vastly powerful psionic entity that contains the totality of the powers and abilities of all the beings that comprise it.

Some Eternals choose to focus on a particular power in order to increased their effectiveness with it. , for example, has developed the power of transmutation farther than any other Eternal. Additionally, some Eternals choose to focus their cosmic energies into other, non-standard abilities. , for example, channels cosmic energy to greatly enhance his senses, while the Interloper uses his to generate fear in others, and Makkari uses his cosmic energies for superspeed.

The recent ret-con of the Eternals' origins, and abilities also introduces a significant limitation to their powers as well: They cannot attack their Celestial "masters" for any reason, whether they make a conscious decision to do so, or whether they are tricked into accidentally striking the beings

Furthermore, Eternals are compelled to attack and neutralize any being that attempts to engage any Celestial with hostile intent this compulsion extends even to the Dreaming Celestial, whom the Eternals were forced to defend even as they feared that the newly-awakened Celestial would destroy all life on the planet.

*'s book "Chariots of the Gods", a 1968 non-fiction best-seller, postulated that ancient aliens gave knowledge to early humans, and were worshipped as gods.
*The Hurricane and Mercury, two characters of , the 1940s predecessor of Marvel, were retconned as being guises of the Eternal Makkari.
*Thematically, the Eternals were similar to another Kirby creation, the - another group of ancient godlike beings in epic struggle with their opposites, with humanity caught in between.

*As seen in "Eternals" by Jack Kirby, the Eternals were, at first, not intended to be part of the normal Marvel canon. In issue #15, when the Eternals must fight a robot Hulk imbued with cosmic powers, a press conference held by New York police sparks questions of whether or not " and Thor are fighting too?" One reporter responds "These comic fans think all of Marvel's characters are running amok!" As the years went on, however, the Eternals entered the current continuity.

A number of trade paperbacks have been released collecting parts of the Eternals comic outtings: