Data fusion, is generally defined as the use of techniques that combine data from multiple sources and gather that information into discrete, actionable items in order to achieve inferences, which will be more efficient and narrowly tailored than if they were achieved by means of disparate sources. 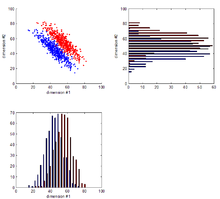 Data fusion processes are often categorized as low, intermediate or high, depending on the processing stage at which fusion takes place.[1] Low level fusion, (Data fusion) combines several sources of raw data to produce new raw data. The expectation is that fused data is more informative and synthetic than the original inputs.

For example, sensor fusion is also known as (multi-sensor) data fusion and is a subset of information fusion.

In the geospatial (GIS) domain, data fusion is often synonymous with data integration. In these applications, there is often a need to combine diverse data sets into a unified (fused) data set which includes all of the data points and time steps from the input data sets. The fused data set is different from a simple combined superset in that the points in the fused data set contain attributes and metadata which might not have been included for these points in the original data set.

In this simple case all attributes are uniform across the entire analysis domain, so attributes may be simply assigned. In more realistic applications, attributes are rarely uniform and some type of interpolation is usually required to properly assign attributes to the data points in the fused set. 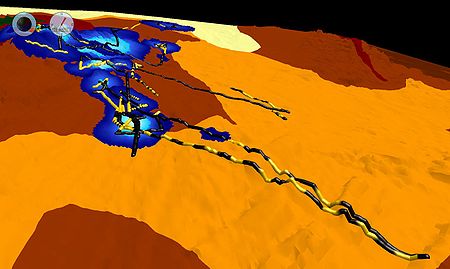 In a much more complicated application, marine animal researchers use data fusion to combine animal tracking data with bathymetric, meteorological, sea surface temperature (SST) and animal habitat data to examine and understand habitat utilization and animal behavior in reaction to external forces such as weather or water temperature. Each of these data sets exhibit a different spatial grid and sampling rate so a simple combination would likely create erroneous assumptions and taint the results of the analysis. But through the use of data fusion, all data and attributes are brought together into a single view in which a more complete picture of the environment is created. This enables scientists to identify key locations and times and form new insights into the interactions between the environment and animal behaviors.

In the figure at right, rock lobsters are studied off the coast of Tasmania. Dr. Hugh Pederson of the University of Tasmania used data fusion software to fuse southern rock lobster tracking data (color-coded for in yellow and black for day and night, respectively) with bathymetry and habitat data to create a unique 4D picture of rock lobster behavior.

In applications outside of the geospatial domain, differences in the usage of the terms Data integration and Data fusion apply. In areas such as business intelligence, for example, data integration is used to describe the combining of data, whereas data fusion is integration followed by reduction or replacement. Data integration might be viewed as set combination wherein the larger set is retained, whereas fusion is a set reduction technique with improved confidence.

Data Fusion and the JDL Model

In the mid-1980s, the Joint Directors of Laboratories formed the Data Fusion Subpanel (which later became known as the Data Fusion Group). The JDL/DFG introduced a model of data fusion that divided the various processes into 6 levels:

Although the JDL Model is still in use today, it is often criticized for its implication that the levels necessarily happen in order from 0-5 and also for its lack of adequate representation of the potential for a human-in-the-loop. Despite these shortcomings, the JDL model is useful for visualizing the data fusion process and also for facilitating discussion and common understanding (Hall et al. 2007).