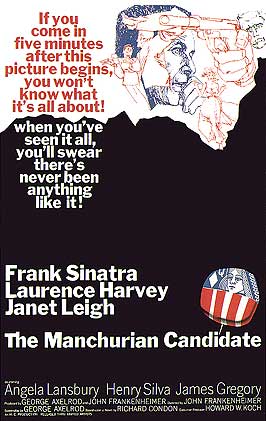 "The Manchurian Candidate" (1962) is a political thriller film adapted by George Axelrod from the 1959 thriller novel, by . It was directed by and starred , , , and . The central concept of the film is that the son of a prominent, right-wing political family has been brainwashed as an unwitting assassin for the International Communist Conspiracy. "The Manchurian Candidate" was nationally released on Wednesday, , , at the zenith of the .

During the the Soviets kidnap an American infantry patrol and take them to , in . There, the s (Russian, Chinese and n) implant in the soldiers' minds to cover the kidnapping, and to provide a trigger in the mind of one soldier, Staff Sergeant Raymond Shaw. Brainwashed, the soldiers are covertly returned to their lines and, after reintegration into American society, unaware of what they went through.

As part of the process, Captain (later Major) Bennett Marco (), Sergeant Raymond Shaw () and the rest of the platoon believe Shaw saved their lives in combat, for which he is awarded the . Also, when asked to describe Raymond Shaw, each man automatically says: "Raymond Shaw is the kindest, bravest, warmest, most wonderful human being I've ever known in my life." Privately, however, they know that Shaw is a cold, sad, unsociable loner. As Marco puts it: "It isn't as if Raymond's hard to like. He's impossible to like!"

After the war, Marco suffers a recurring nightmare: a hypnotized Sgt. Shaw kills two of his platoon before the assembled Soviet, Chinese and North Korean brass watching a practical demonstration of the Communist brainwashing technique. He wants to investigate, but receives no support from Army Intelligence, for whom he currently works, because he has no proof. This changes when he learns that another soldier from the platoon has also been suffering the same nightmare and identified the same assembled Communists.

Deciding that this is too much of a coincidence, Army Intelligence decides to support Marco's attempts to solve the mystery.

Raymond Shaw is an unwitting Communist whose actions are triggered by a Queen of Diamonds playing card. When he sees it, he will obey the next suggestion or order given to him. His intended role is that of a killer who, while carrying out his assignments, must also kill any witnesses and then forget his actions. The brainwasher, Dr. Yen, explains: " [Shaw's] "brain has not just been 'washed', but 'dry-cleaned'." To test the assassin's conditioning, Dr. Yen orders Shaw to kill his newspaper publisher employer.

Raymond's mother, Eleanor Iselin, is the driving force behind her husband Senator John Yerkes Iselin, a bombastic demagogue in the style of who is dismissed by most people as a fool. He is also Raymond's stepfather. Raymond hates them both, especially his domineering mother. Sen. Iselin's political stature is established when (per his wife's orders) he interrupts a televised Congressional briefing of the and accuses him of knowing that some 207 employees are Communist agents. This provokes a chaotic reaction among journalists and an enraged reaction from the Secretary.

Unknown to everyone, even Raymond, the Iselins "are" in fact Communist agents with a plan that should take them to the . Mrs. Iselin herself is the American operative for whom Raymond is the instrument with which to effect the operation's final step.

Raymond briefly finds happiness when he rekindles a youthful romance with Jocelyn Jordan, daughter of Senator Thomas Jordan, one of his stepfather's political rivals. Raymond originally courted her in order to get at his parents in a -style romance, but in time the love turned genuine with Jocelyn and her father becoming the nearest he has ever had to having friends.

Raymond and Jocelyn are reeunited as part of a plan by Raymond's mother to get Sen. Jordan on her side. They then elope. Although pleased with the match, Sen. Jordan makes it clear to Raymond's mother that he will still block her husband's bid for the vice presidential nomination of their party. She in turn has Raymond assassinate Jordan, and in the process he also kills Jocelyn, who witnessed the event.

Raymond of course has no recollection of this, and is grief-stricken when he hears of Jocey's murder.

In a cynically moving scene, Raymond's mother admits to the activated Raymond that she has been a Communist agent for years. She needed an assassin to complete her plan and regrets that he is involved. After all, the world is full of killers who do not require brainwashing to do the job. The International Communist Conspiracy chose Sergeant Raymond Shaw as the assassin because it solidified their hold and control over his mother, and she intends to strike back at them, once in power.

In the course of the investigation, Marco has discovered that the Queen of Diamonds card is what is required to put Raymond in an hypnotic state and make him obey all orders without question. He uses a trick deck composed entirely of Queen of Diamonds cards in order to get the full story and to tell Raymond not to carry out the final phase of the Iselins' plan.

Although Marco's attempt appears to fail, Raymond keeps control over himself at the party convention and takes his revenge by killing his stepfather and mother. He then commits while wearing his now truly earned .

The film was No. 67 on the AFI's "" when that list was compiled in 1998, but in 2007 a new version of that list was made which excluded "The Manchurian Candidate". It was also No. 17 on AFI's "100 Years...100 Thrills" lists. In 1994, "The Manchurian Candidate" was selected for preservation in the United States by the as being "culturally, historically, or aesthetically significant".

It has received a rare 100 percent rating from [http://www.rottentomatoes.com/m/1013227-manchurian_candidate/] . Prominent American film critic ranks "The Manchurian Candidate" as an exemplary "Great Film", declaring that it "is inventive and frisky, takes enormous chances with the audience, and plays not like a 'classic' but as a work as alive and smart as when it was first released." [http://rogerebert.suntimes.com/apps/pbcs.dll/article?AID=/20031207/REVIEWS08/40802006/1023]

In April 2007, Angela Lansbury's character was selected by as one of the ten greatest villains in cinema history.

For Raymond's mother, Sinatra had wanted , but Frankenheimer, who had worked with Lansbury in a mother role in a previous film, "", suggested having her for the part

Although Lansbury plays Raymond Shaw's mother, she was in fact only two years older than Harvey.

plays Marco's love interest. A bizarre conversation on a between her character and Marco has been interpreted by some &mdash; notably, film critic &mdash; as implying that Leigh's character, Eugenie Rose Chaney, is working for the Communists to activate Marco's programming, much as the queen of diamonds activates Shaw's. It is a rather strange conversation between people who have only just met, and almost appears to be an exchange of passwords. Frankenheimer himself admits that he had no idea whether or not "Rosie" was supposed to be an agent of any sort; he merely lifted the train conversation straight from the Condon novel, in which there is no such implication.

On the DVD audio commentary of the film, the director stated his belief that it contained the first-ever fight in an American motion picture. This is true insasmuch as this was the first fight scene in an American film in which a "" faced off against a "", however the film "" featured a fight scene between a conventional fighter played by and a karate expert played by .

During the fight scene between Frank Sinatra and Henry Silva, Sinatra broke his hand during a movement where he smashed through a table. This resulted in problems with his hand/fingers for several years and is said to be one of the reasons why he pulled out of a starring role in "", having to undertake surgery to alleviate pains.

The famous interrogation sequence where Raymond and Marco confront each other in the hotel room opposite the convention are the rough cuts. When first filmed Sinatra was out of focus and when they tried to re-shoot the scene he was simply not as effective as he had been in the first take. Frustrated, Frankenheimer decided in the end to simply use the original out-of-focus takes. Critics praised him for showing Marco from Raymond's distorted point-of-view.

For the scene in the convention hall prior to the assassination, Frankenheimer was at a loss as to how Marco would pinpoint Raymond's sniper's nest. Eventually he decided on a method similar to 's "Foreign Correspondent", made in 1940. Frankenheimer notes that what would be in the 1960s would now be looked upon as an .

The Karate fight in "Candidate" takes place in Raymond's apartment between Marco and Raymond's Korean manservant (). Some have suggested that the battles between and his Oriental manservant Cato in movies were inspired by this scene.

on the show "Heroes" was inspired by Mrs. Iselin, and is in fact named after Angela Lansbury, because creator could not remember the first name of the character (which is not specified in the film).

directed an up-to-date version of "The Manchurian Candidate" in 2004, starring as Major Marco, as Congressman Raymond Shaw, and as Senator Eleanor Shaw (her husband is not included). This contemporary adaptation made substantial changes to the source material by dropping the Cold War background for an anti- story of private and business control of the U.S. government. The American soldiers are also shown being captured in during the between i and UN forces.

Raymond is the brainwashed Manchurian candidate and Marco the brainwashed assassin. The novel explicitly depicts incest between Raymond and his mother. The social conventions of American cinema in 1962 limited Frankenheimer's depiction to a salacious adult kiss between mother and son. Demme's depiction of mother-son incest is more explicit.

Demme's rewritten and reworked version of "The Manchurian Candidate" was less critically successful than the original.

Hollywood rumor holds that Sinatra removed the film from distribution after the . This is untrue, as can be confirmed from the archives section online. [cite news |first=Michael |last=Schlesinger |title=A 'Manchurian' myth |url=http://www.latimes.com/entertainment/la-ca-pulloutletter27jan27,1,7922219.story |publisher=Los Angeles Times |date=2008-01-27 |accessdate=2008-01-28 ] Certainly the film was rarely shown in the decades after 1963, but it did appear as part of the Thursday Night Movies series on on , and again later that season. It was also shown twice on NBC, once in the spring of 1974 and again in the summer of 1975. Sinatra did not acquire distribution rights to "The Manchurian Candidate" until the late 1970s. He was involved in a theatrical re-release of the film in 1988. The film has aired on a fairly regular basis on the and cable networks.

Michael Schlesinger, who was responsible for the film's 1988 reissue, maintains that the film's apparent withdrawal was unrelated to the Kennedy assassination. He notes that the film was "simply played out" by 1963, and that MGM did not re-release it theatrically until 1988 due to disagreements with Sinatra's attorneys over the terms of the film's licensing.

Similar rumors and treatment surround the film "Suddenly!" in which Sinatra himself starred as a Presidential assassin.