The Green Peafowl or Javan Peafowl, Pavo muticus (from Latin Pavo, peafowl; muticus, Mute, docked or curtailed)[1] is a large Galliform bird that is found in the tropical forests of Southeast Asia. It is the closest relative of the Indian Peafowl aka Blue Peafowl (Pavo cristatus), which is mostly found on the Indian subcontinent. 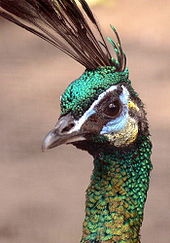 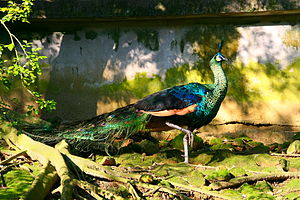 The sexes of Green Peafowl are quite similar in appearance, especially in the field. During most of the year, when the males have no visible trains, it can be difficult to distinguish the sexes unless they can be directly compared. The male is generally brighter and is much larger, while the female is slightly duller and lacks a triangle of green feathers at the wing shoulder. Both sexes have tall pointed crests, and are long-legged, heavy-winged and long-tailed in silhouette. Seen from a distance, they are generally dark coloured birds with pale vermillion or buff coloured primaries which are quite visible in their peculiar flight which has been described as a true flapping flight with little gliding that one associates with Galliform birds.

The males of the subspecies imperator and spicifer are overall bluish-green, the former having a metallic-green breast, neck, wing-coverts and outer webs of secondaries, whereas the latter has a duller, bluer breast and dark gun metal or prussian blue neck, and more black on the wing-coverts and outer web of secondaries. Compared to these, nominate muticus is overall more golden-green and has less blue on the neck and breast. Considerable variation exists in plumage of neck and breast which may be linked with age and sex.[2]

In some subspecies, the Green Peafowl has a loud call of ki-wao, which is often repeated. The female has a loud aow-aa call with an emphasis on the first syllable. The males call from their roost sites at dawn and dusk.[3]

Green Peafowl are large birds, one of the largest living galliforms in terms of overall length and wingspan, though rather lighter-bodied than the Wild Turkey. The male is 1.8–3 m (5.9–9.8 ft) in total length but this includes its tail covert (or "train") which itself measures 1.4–1.6 m (4.6–5.2 ft). The tail coverts are even longer than those of the male Indian Peafowl but are shorter than those of the arguses. The adult female is around half the total length of the breeding male at 1–1.1 m (3.3–3.6 ft) in length. By body mass, the Green Peafowl is the most sexual dimorphic of galliforms and among the most dimorphic in size of all birds. The adult male weighs 3.85–5 kg (8.5–11 lb), which is around 4 times as heavy as the adult female, at 1–1.2 kg (2.2–2.6 lb). It has a relatively large wingspan that averages around 1.2 m (3.9 ft) and can reach 1.6 m (5.2 ft) in big males. The Green Peafowl is capable of sustained flight and is often observed on wing.[4]

The Green Peafowl was widely distributed in Southeast Asia in the past from eastern and north-eastern India, northern Myanmar and southern China, extending through Laos, and Thailand into Vietnam, Cambodia, Peninsular Malaysia and the islands of Java. Records from northeastern India have been questioned and old records are possibly of feral birds.[5] The ranges have reduced with habitat destruction and hunting.[3]

Green Peafowls are found in a wide range of habitats including primary and secondary forest, both tropical and subtropical, as well as evergreen and deciduous. They may also be found amongst bamboo, on grasslands, savannas, scrub and farmland edge. In Vietnam, the preferred habitat was found to be dry deciduous forest close to water and away from human disturbance.[6] Proximity to water appears to be an important factor.[7]

Delacour stated that through further research, more subspecies may be discovered. Some authors have suggested that the population found in Yunnan may be yet another race,[10] which has been supported by a study in China suggesting there are two different forms of Green Peafowl living in Yunnan which should be classified as distinct subspecies.[11]

The Green Peafowl is a forest bird which nests on the ground laying 3 to 6 eggs.[12]

It has been widely believed without quantification that the Green Peafowl is polygynous, but unlike the Indian Peafowl, males are solitary and do not display in leks. Instead the solitary males are highly territorial and form harems with no pair bonds.

However, the theory that the male is polygynous also conflicts with observations in captivity; pairs left alone with no human interaction have been observed to be strongly monogamous. The close similarity between both sexes also suggests a different breeding system in contrast to that of the Indian Peafowl. Thus, some authors have suggested that the harems seen in the field are juvenile birds and that males are not promiscuous.[3]

They usually spend time on or near the ground in tall grasses and sedges. The Green Peafowl wades and forages for food in the shallows for a good portion of each day; it is also a good swimmer.[citation needed] Family units roost in trees at a height of 10–15 m.[3] The diet consists mainly of fruits, invertebrates, reptiles, and other small animals. As with the other member of its genus, the Green Peafowl can even hunt venomous snakes, making them useful for pest control. Ticks and termites, flower petals, buds leaves and berries are favorite foods of adult peafowl. Frogs and other aquatic small animals probably make up the bulk of the diet of growing birds. 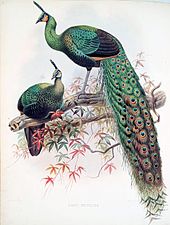 Due to hunting and a reduction in extent and quality of habitat, the Green Peafowl is evaluated as Endangered on the IUCN Red List of Threatened Species. It is listed on Appendix II of CITES. Before 2009 it was evaluated as Vulnerable. The world population has declined rapidly and the species no longer occurs in many areas of its past distribution. The population in the wild was estimated to be about 5,000 to 10,000 individuals around 1995.[3]

Hybridisation with the Indian Peafowl may also be a cause for the decline of the Green Peafowl, damaging the genetic stock of captive birds. Because some aviculturists refer to all races as "Java Peafowl", the subspecies of Green Peafowl are also mixed in captivity.

In 2005, The Star reported that successful reintroductions were being made in Malaysia by the World Pheasant Association (WPA).[13]

It is noted that the publication stated that the Javan and Malay races were genetically identical and the subspecies muticus was introduced - the scientific community consensus. There has been some indication that the Malaysian and Javanese muticus birds are not identical so it is uncertain which subspecies was introduced. Some photographs of the birds used suggests they were actually spicifer. 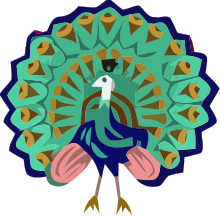 The green peacock was a royal symbol of Burma's monarchs

Although the Burmese or Grey Peacock-pheasant is the national bird of Myanmar, the green peafowl was an ancient symbol of the monarchs of Burma.[14] It was also shown during British colonial times on the flag of the governor and the naval ensign, as well as on the flag of the State of Burma from 1943–1945 and on the currency of independent Burma as well. The flag of the banned National League for Democracy party also features a Green Peafowl (with the tufted crest) next to a star.