For the fish, see manta ray; for other things of this name, see Manta (disambiguation).

Manta is a mid-sized city in Manabí Province, Ecuador. It is the second most populous city in the province, the fifth most populous in the country and, economically, the third most important city of Ecuador. Manta has existed since Pre-Columbian times. It was a trading post for the Mantas. According to the 2001 census, the city had 192,322 inhabitants. Its main economic activity is tuna fishing. Other economic activities include tourism and a chemical industry with products from cleaning supplies to oils and margarine.

Manta possesses the largest seaport in Ecuador. The port was used by Charles Marie de La Condamine upon his arrival in Ecuador when leading the French mission to measure the location of the equator in 1735. From Manta, Condamine started his trip inland towards Quito.

Manta has an international cargo airport, Eloy Alfaro International Airport and an important military base (known as Manta Air Base or Eloy Alfaro Air Base). Between 1999-2009 Manta Air Base was used by U.S. air forces to support anti-narcotics military operations and surveillance flights against Colombian drug trafficking cartels. The lease was not renewed by the Ecuadorean government.

Manta is recognized thanks to its international film festival featuring groups from different places in the world. The Ecuadorian actor Carlos Valencia, once invited to Cannes Film Festival for his performance in Ratas Ratones y Rateros (1999) directed by Sebastián Cordero, who was born in the capital city of Quito.

As in the entire country, fútbol (soccer) is the main sport of the city. The city has two professional teams: Delfín S.C. and Manta F.C. who used to be Manta S.C. and among others were Green Cross F.C., America, Juventud Italiana and River Plate However, most inhabitants are fans of Barcelona Sporting Club and Club Sport Emelec the teams with most fans base in Manabí.

The practice of water sports is also very significant in the city. Water sports include surfing, (Manta was the host for the 2004 Bodyboarding World Cup), scuba diving, water skiing, kiteboarding and kitesurfing. Nearby Manta, Salinas, Ecuador, was the site of the ISA World Junior Surfing Games Ecuador in 2009. Surfing in Ecuador is very popular because of the year round steady climate

Manta has some of South America's most breathtaking beaches. The city was selected as the site of the sixth South American Windsurfing Championship. It is renowned for its diving and sport fishing, with Black and Blue Marlins reaching even the 1.000 pound mark.[citation needed]

Tennis is also widely practiced in Manta. A number of ATP Challenger Series have been played in the city.

Manta hosts an International Theater Festival in September. Sporting events take place in November, and from January through April. The Central Bank Museum includes an important collection of Pre-Columbian craft. A MAAC cine, one of four in Ecuador, shows independent and non-Hollywood productions. 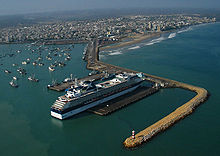 Manta possesses one of the most solid city economies in Ecuador. The main industries are fishing and tuna canning and processing. Processed tuna is exported to Europe and the U.S. International tuna corporations including Bumble Bee, Van Camps, British Columbia Packers, and Conservas Isabel, as well as leading national tuna processor Marbelize, have sizable factories in Manta. Other important products include vegetable oil. Large Ecuadorian corporations including La Fabril and Ales have their main factories in Manta. According to a recent survey by "Vistazo" (important Ecuadorian magazine), Manta's metropolitan area possesses many of the largest (by revenue) companies in Ecuador (following Quito and Guayaquil which have larger companies than Manta). Tourism is increasingly important for Manta's economy. Various cruise ships will make a port of call visit to Manta while traveling the southern Pacific Ocean. In addition, produced in Manabí and known throughout the world are the original and official "Panama" hats, which are made in the nearby town of Montecristi. Panama hats are favorite souvenirs among visitors of Manta. Manabí is also famous for its delicious cuisine.[citation needed] For those who enjoy seafood Manta is second to none.[citation needed]

Nearby, also, is the small town of Montecristi, founded in the early 17th century. With its colonial architecture, this small town is best known for its wickerwork weaving, and as the original birth place of the Panama hats which, despite their name, were historically produced in Ecuador.

Despite its near-equatorial location, the Humboldt Current serves to give Manta an arid climate (Köppen BWh). The city is hot and cloudy almost throughout the year, but rainfall is very erratic and almost completely confined to the month from January to April. Even then it falls mainly during El Niño events when the Humboldt Current weakens.