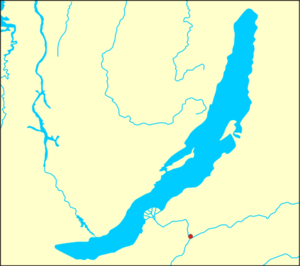 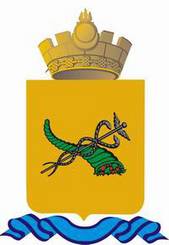 Ulan-Ude was first called Udinskoye (Russian: У́динское) for its location on the Uda River. From around 1735, the settlement was called Udinsk (Russian: У́динск) and was granted town status under that name in 1775. However, its name was changed to Verkhneudinsk, literally "Upper Udinsk" (Russian: Верхнеу́динск "Verxneudinsk"; Buryat: Дээдэ-Үдэ "Deede-Üde"; _mn. Дээд Үүд "Deed Üüd"; : "Degedy Egüde"), in 1783 to differentiate it from ("Lower Udinsk") lying on a different Uda River near which gained town status that year. (The "upper" and "lower" refer to positions of the two cities relative to each other, not the location of the cities on their respective rivers. Verkhneudinsk lies at the mouth of its Uda, i.e. the lower end, while Nizhneudinsk is along the middle stretch of its Uda.) The current name of Ulan-Ude (Russian: Ула́н-Удэ́; Buryat: Улаан-Үдэ "Ulaan-Üde"; Mongolian: Улаан Үүд "Ulaan Üüd"; Classical Mongolian: "Ulaɣan Egüde") was bestowed upon the city in 1934 and means "red Uda" or "red gate" in Buryat reflecting the communist ideology of the to which it belonged.

The first occupants of the area where Ulan-Ude now stands were the and, later, the Buryat Mongols. Ulan-Ude was founded in 1666 by the Russian s as Udinskoye. Due to its favourable geographical position, the city grew rapidly and became a large trade centre which connected Russia with and and, from 1690, was the administrative center of the region. In 1775, the city, now Udinsk, was chartered as a city and in in 1783 was renamed Verkhneudinsk. After a large fire in 1878, the city was almost completely rebuilt. The reached the city in 1900 causing an explosion in growth. The population which was 3500 in 1880 reached 126,000 in 1939. On 1934, the city was renamed Ulan-Ude.

Ulan Ude has a moderate with mean temperatures of C to F|+1.7. The hottest month, July, has a mean temperature of C to F|+26.9 and the coldest, January, is C to F|-24.8. Ulan-Ude receives an average mm to in|264 of precipitation per year, mostly in the summer.

The city is the center of Tibetan and the important is located 23 km from the city.

Ulan Ude is located on the main line (Trans-Siberian line) of the between and Chita at the junction of the Trans-Mongolian line (the ) which begins at Ulan Ude and continues south through to in China. The city also lies on the M55 section of the (part of the ), the main federal road to . Air traffic is served by the (Mukhino), as well as the smaller . Intracity transport includes , , and "" () lines.

Until 1991, Ulan-Ude was city closed to foreigners. There are old merchants' mansions richly decorated with wood and stone carving in the historical center of Ulan-Ude, along the river banks which are exceptional examples of Russian classicism. The city has a large ethnographic museum which recalls the history of the peoples of the region. There is also a large and highly unusual statue of the head of in the central square, the largest in the world.