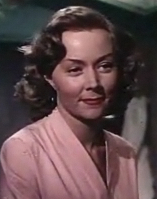 Grahame was born Gloria Hallward in . Her father, Reginald Michael Bloxam Hallward, was an and author descended from . [ [http://www.highbeam.com/doc/1P2-1023009.html The Two-Ring Circus; Tracking the Gnarled Family Trees of Hollywood - The Washington Post - HighBeam Research ] ] Her mother, Jeannie McDougall, who used the stage name Jean Grahame, was a British stage actress and acting teacher who taught Gloria acting during her childhood and adolescence. She was signed to a contract with MGM Studios after saw her performing on Broadway.

Changing her name to Gloria Grahame, she made her film debut in "" (1944) and scored one of her most widely praised roles as the promiscuous Violet, who is saved from disgrace by George Bailey in "" (1946). MGM was not able to develop her potential as a star and her contract was sold to in 1947.

Grahame was often featured in pictures as a tarnished beauty with an irresistible sexual allure. During this time, she made films for several Hollywood studios. She received an Oscar nomination for for "Crossfire" (1947). Grahame starred with in the 1950 film "", a performance which garnered her considerable praise. Though today it is considered among her finest performances, at the time it didn't help her career; it wasn't a box-office hit and , owner of , admitted that he never saw her first starring role. When she asked to be loaned out for meaty roles in Born Yesterday and Hughes refused and made her do a supporting role in . She won the Academy Award for Best Supporting Actress in "" (1952).

Other memorable roles included the scheming Irene Nieves in "" (1952), the "femme fatale" Vicki Buckley in "" (1953), and mob moll Debby Marsh in "" (1953). In a horrifying, especially for its time, scene, she is scarred by hot coffee thrown in her face by 's character.

Grahame was often regarded as a difficult actress to work with,Fact|date=January 2008 and her career began to wane after her quixotic, but successful casting in the musical movie "" (1955). Grahame was seen as difficult to cast with the demise of "film noir", not evil, but too naughty to be an innocent. She began a slow return to the theater, but returned to films occasionally to play supporting roles, mostly in minor releases.

Grahame has a star on the for her contribution to Motion Pictures, at 6522 Hollywood Boulevard.

Grahame had a string of stormy romances and failed marriages during her time in Hollywood. These difficulties began to affect her career after marital and child custody problems began to influence Grahame on the set of "Oklahoma!". In 1960, even Hollywood was scandalized after her marriage to Tony Ray, Grahame's former stepson and son of her ex-husband ("", "") whom she had divorced eight years previously. Gloria ended up having children by both father and son. Finding film roles difficult to obtain in Hollywood, she returned to the theater and continued to work as a stage actress.

In 1981, Grahame collapsed during a rehearsal for a British stage play, and returned to , where she died soon after from at the age of 57. She is interred in in . An account of her last days is given in the book "Film Stars Don't Die in Liverpool" by Peter Turner.

She was survived by her children from various marriages, and a sister.