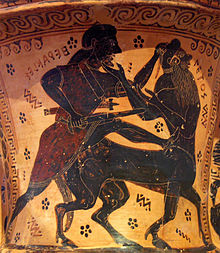 On the neck of this amphora, the painter depicted Nessos fighting Heracles. The figure is also marked with the name 'Netos'.

The Nessos Painter (also known as the Nettos Painter, a name derived from the Attic spelling of Nessos), was a pioneer of Attic black-figure vase painting. He is considered to be the first Athenian to adopt the Corinthian style who went on to developed his own style and introduced innovations.

On the neck of an amphora in the National Archaeological Museum of Athens, the painter depicted Nessos fighting Heracles. The figure is also marked with the name 'Netos'. John D. Beazley, the authority on Attic vase painting, attributed the name 'The Nessos Painter' to this artist - preferring the Attic dialect form of the name Nessos/Netos. Later, after new finds in Athens and in a cemetery outside the city, paintings of chimera were identified with this painter and Beazley subsequently tried to use the name 'Chimera Painter' - but it failed to find general acceptance.

The painter's early works are particularly reminiscent of the proto-Corinthian style, using space-filling ornamentation similar to that of 'the Painter of Berlin'. However, with the eponymous 'Nessos' vase, he established a style distinct from the Corinthian style, which at this stage (late 7th century BCE) was marked by clear clay fields and contour drawing. This was the critical distinction of the new black figure style. Most of his work falls in the last quarter of the 7th century, during the transition from the proto-Corinthian to Corinthian. He did not completely abandon contour drawing, but by introducing two or more etched lines he introduced a new sharpness and suggestion of form - most particularly with curls, feathers and spring designs.

The other distinctive feature of the Nessos painter was the scale of some of his work with some pieces - mixing bowls for example - over a meter in height. The Nessos painter is considered by many as the essential link between classical Attic vase painting and the new Corinthian style, which uses animal motifs and mythological figures and scenes. It is sparing with its use of white opaque but often uses red pigment to intensify the red colour of the clay. Perhaps under the influence of Egyptian figure painting, an idiom developed by which white faces indicated women, red faces men - and indeed up to the end of the black figure period, white was used to signify female faces.