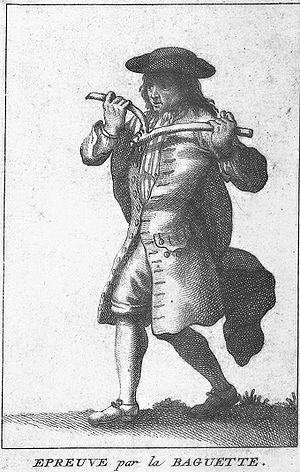 A dowser, from an 18th century French book about superstitions. 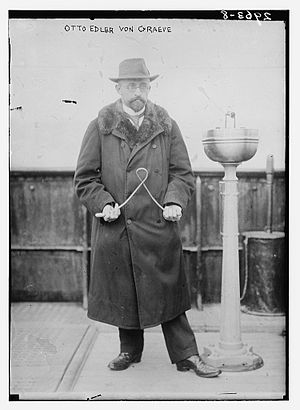 Dowsing is a type of divination employed in attempts to locate ground water, buried metals or ores, gemstones, oil, gravesites,[1] and many other objects and materials, as well as so-called currents of earth radiation (Ley lines), without the use of scientific apparatus. Dowsing is also known as divining (especially in reference to interpretation of results),[2] doodlebugging[3] (in the US)[citation needed], or (when searching specifically for water) water finding, water witching or water dowsing.[4] There is no accepted scientific rationale behind dowsing, and there is no scientific evidence that it is effective.

A Y- or L-shaped twig or rod, called a dowsing rod, divining rod (Latin: virgula divina or baculus divinatorius) or witching rod is sometimes used during dowsing, although some dowsers use other equipment or no equipment at all.

Dowsing appears to have arisen in the context of Renaissance magic in Germany, and it remains popular among believers in Forteana or radiesthesia[5].

Dowsing as practiced today may have originated in Germany during the 15th century, when it was used to find metals. As early as 1518 Martin Luther listed dowsing for metals as an act that broke the first commandment (i.e., as occultism).[6] The 1550 edition of Sebastian Münster's Cosmographia contains a woodcut of a dowser with forked rod in hand walking over a cutaway image of a mining operation. The rod is labelled "Virgula Divina – Glück rüt" (Latin: divine rod; German "Wünschelrute": fortune rod or stick), but there is no text accompanying the woodcut. By 1556 Georgius Agricola's treatment of mining and smelting of ore, De Re Metallica, included a detailed description of dowsing for metal ore.[7]

In 1662 dowsing was declared to be "superstitious, or rather satanic" by a Jesuit, Gaspar Schott, though he later noted that he wasn't sure that the devil was always responsible for the movement of the rod.[8]

An epigram by Samuel Sheppard, from Epigrams theological, philosophical, and romantick (1651) runs thus:

Virgula divina.
"Some Sorcerers do boast they have a Rod,
Gather'd with Vowes and Sacrifice,
And (borne about) will strangely nod
To hidden Treasure where it lies;
Mankind is (sure) that Rod divine,
For to the Wealthiest (ever) they incline."

In the late 1960s during the Vietnam War, some United States Marines used dowsing to attempt to locate weapons and tunnels.[9]

Traditionally, the most common dowsing rod is a forked (Y-shaped) branch from a tree or bush. Some dowsers prefer branches from particular trees, and some prefer the branches to be freshly cut. Hazel twigs in Europe and witch-hazel in the United States are traditionally commonly chosen, as are branches from willow or peach trees. The two ends on the forked side are held one in each hand with the third (the stem of the "Y") pointing straight ahead. Often the branches are grasped palms down. The dowser then walks slowly over the places where he suspects the target (for example, minerals or water) may be, and the dowsing rod supposedly dips, inclines or twitches when a discovery is made. This method is sometimes known as "Willow Witching." 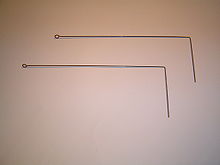 Many dowsers today use a pair of simple L-shaped metal rods. One rod is held in each hand, with the short arm of the L held upright, and the long arm pointing forward. When something is found, the rods cross over one another making an "X" over the found object. If the object is long and straight, such as a water pipe, the rods will point in opposite directions, showing its orientation. The rods are sometimes fashioned from wire coat hangers, and glass or plastic rods have also been accepted. Straight rods are also sometimes used for the same purposes, and were not uncommon in early 19th century New England.

In all cases, the device is in a state of unstable equilibrium from which slight movements may be amplified.[10]

Other equipment used for dowsing

A pendulum of crystal, metal or other materials suspended on a chain is sometimes used in divination and dowsing. In one approach the user first determines which direction (left-right, up-down) will indicate "yes" and which "no" before proceeding to ask the pendulum specific questions, or else another person may pose questions to the person holding the pendulum. The pendulum may also be used over a pad or cloth with "yes" and "no" written on it and perhaps other words written in a circle. The person holding the pendulum aims to hold it as steadily as possible over the center and its movements are held to indicate answers to the questions. In the practice of radiesthesia, a pendulum is used for medical diagnosis.

Early attempts at a scientific explanation of dowsing were based on the notion that the divining rod was physically affected by emanations from substances of interest. The following explanation is from William Pryce's 1778 Mineralogia Cornubiensis:

The corpuscles ... that rise from the Minerals, entering the rod, determine it to bow down, in order to render it parallel to the vertical lines which the effluvia describe in their rise. In effect the Mineral particles seem to be emitted from the earth; now the Virgula [rod], being of a light porous wood, gives an easy passage to these particles, which are also very fine and subtle; the effluvia then driven forwards by those that follow them, and pressed at the same time by the atmosphere incumbent on them, are forced to enter the little interstices between the fibres of the wood, and by that effort they oblige it to incline, or dip down perpendicularly, to become parallel with the little columns which those vapours form in their rise.

Such explanations have no modern scientific basis.

A 1986 article in Nature included dowsing in a list of "effects which until recently were claimed to be paranormal but which can now be explained from within orthodox science."[11] Specifically, dowsing could be explained in terms of sensory cues, expectancy effects and probability.[11]

Skeptics and some supporters believe that dowsing apparatus has no power of its own but merely amplifies slight movements of the hands caused by a phenomenon known as the ideomotor effect: people's subconscious minds may influence their bodies without their consciously deciding to take action. This would make the dowsing rods a conduit for the diviner's subconscious knowledge or perception.[12][13]

Soviet geologists have made claims for the abilities of dowsers,[14] which are difficult to account for in terms of the reception of normal sensory cues. Some authors suggest that these abilities may be explained by postulating human sensitivity to small magnetic field gradient changes.[15][16][17]

Renowned skeptic James Randi at a lecture at Rockefeller University, on October 10, 2008, holding an $800 device advertised as a dowsing instrument

A 1948 study tested 58 dowsers' ability to detect water. None of them was more reliable than chance.[18] A 1979 review examined many controlled studies of dowsing for water, and found that none of them showed better than chance results. [4]

In a study in Munich 1987-1988 by Hans-Dieter Betz and other scientists, 500 dowsers were initially tested for their "skill" and the experimenters selected the best 43 among them for further tests. Water was pumped through a pipe on the ground floor of a two-storey barn. Before each test the pipe was moved in a direction perpendicular to the water flow. On the upper floor each dowser was asked to determine the position of the pipe. Over two years the dowsers performed 843 such tests. Of the 43 pre-selected and extensively tested candidates at least 37 showed no dowsing ability. The results from the remaining 6 were said to be better than chance, resulting in the experimenters' conclusion that some dowsers "in particular tasks, showed an extraordinarily high rate of success, which can scarcely if at all be explained as due to chance ... a real core of dowser-phenomena can be regarded as empirically proven."[19]

Five years after the Munich study was published, Jim T. Enright, a professor of physiology and a leading skeptic who emphasised correct data analysis procedure, contended that the study's results are merely consistent with statistical fluctuations and not significant. He believed the experiments provided "the most convincing disproof imaginable that dowsers can do what they claim,"[20] stating that the data analysis was "special, unconventional and customized." Replacing it with "more ordinary analyses,"[21] he noted that the best dowser was on average 4 millimeters out of 10 meters closer to a mid-line guess, an advantage of 0.0004%, and that the five other good dowsers were on average further than a mid-line guess[22]. The study's authors responded, saying "on what grounds could Enright come to entirely different conclusions? Apparently his data analysis was too crude, even illegitimate."[23] The findings of the Munich study were also confirmed in a paper by Dr. S. Ertel,[24] a German psychologist who had previously intervened in the statistical controversy surrounding the "Mars effect", but Enright remained unconvinced.[25]

More recently a study[26] was undertaken in Kassel, Germany, under the direction of the Gesellschaft zur Wissenschaftlichen Untersuchung von Parawissenschaften (GWUP) [Society for the Scientific Investigation of the Parasciences]. The three-day test of some 30 dowsers involved plastic pipes through which water flow could be controlled and directed. The pipes were buried 50 centimeters under a level field, the position of each marked on the surface with a colored strip. The dowsers had to tell whether water was running through each pipe. All the dowsers signed a statement agreeing this was a fair test of their abilities and that they expected a 100 percent success rate, however the results were no better than chance.

Some researchers have investigated possible physical or geophysical explanations for alleged dowsing abilities. One study concluded that dowsers "respond" to a 60 Hz electromagnetic field, but this response does not occur if the kidney area or head are shielded.[27]

A number of devices resembling "high tech" dowsing rods have been marketed for modern police and military use: none has been shown to be effective.[28] The more notable of this class of device are ADE 651, Sniffex, and the GT200.[29][30] A US government study advised against buying "bogus explosive detection equipment".[28]