"Face/Off" is a 1997 directed by and starring and . It tells of how an FBI agent must assume the physical appearance of his sworn enemy in order to stop a terrorist plot and how that same enemy then assumes his.

It is considered Woo's most successful American film, both critically and commercially. The film exemplifies and action sequences, and has Travolta and Cage each playing two personalities. It was the first Hollywood film on which Woo was given complete creative control and was acclaimed by both audiences and critics as a result. Eventually grossing $245 million worldwide, the film was a financial success.

Public enemy number one and freelance terrorist () is being relentlessly pursued by FBI agent (), whose son, Michael Archer, was killed six years earlier at an amusement park during an attempt by Troy to kill Archer. Castor is recorded in the FBI files to have a whole list of terrorism-related offences, including bombings and political assassinations. The FBI receives information that Castor's brother Pollux () has chartered a plane at a Los Angeles airport, and Archer knows the Troy brothers well enough to guess that Pollux "never flies without big brother!" Archer leads an FBI team in chasing the plane down a runway and is able to shoot out one of the engines. Unable to take off, Castor kills the pilot and crashes the plane into a hangar. In the ensuing chaos, which left several FBI agents wounded or dead, Pollux is captured by the FBI and Castor is knocked into a coma after bragging to Archer about a biological bomb that will destroy Los Angeles.

Archer initially believes Castor was bluffing, but after the FBI finds schematics for the bomb on a disk recovered from Pollux's briefcase, Archer realizes that the threat is genuine. Although he learns the date of the bombing from several of Castor's henchmen, including Dietrich Hassler (), Archer is unable to find any information about the location of the bomb. Knowing that the only way to obtain the location is from Castor's brother, Pollux, Archer's colleagues, Tito and Miller, convince him to undergo a surgical procedure to switch faces with Castor's comatose body, as they know he would only discuss the bomb with his brother.

After the procedure, arrangements are made for Archer (as Castor) to be incarcerated with Pollux at Erehwon prison(Erehwon being nowhere spelled in reverse), where he successfully learns the bomb's location. Castor unexpectedly awakens from his coma (it is implied this is a result of shock from the trauma of the surgery) and, realising what has happened, has Dr. Walsh (), the doctor responsible for the surgery, kidnapped by Castor's minions and perform the surgery on him, then manages to steal Archer's face in process.

Castor then burns down the Walsh Institute, including Walsh, Tito () and Miller () to eliminate all evidence of the identity-swap. Castor (as Archer) then visits Archer (as Castor) in prison to deliver the news to Archer (as Castor) and taunts Archer (as Castor) about his plan to abuse Archer's job and make love to his wife. Castor (as Archer) has the FBI negotiate a deal with Pollux for his release in return for revealing the bomb's location. Castor(as Archer) then proceeds to disarm the bomb and revels in praise from his colleagues and the media, informing his brother that they are "going straight", meaning they will use Archer's identity and influence to their advantage and for their own purposes. Ironically, due to Castor's gregarious, irreverent nature and off-beat sense of humor, he becomes more popular at work than the real Archer was.

After Castor's disarmament of the bomb, Archer (as Castor) escapes from Erehwon prison, which is revealed to be inside an offshore oil platform, and swims to shore. Some time later, Archer (as Castor) visits Dietrich and successfully fools him and the rest of Castor's men into thinking that he is the real Castor Troy. Archer (as Castor) then asks Dietrich for help killing Castor (as Archer). Also present is Sasha Hassler (), Dietrich's sister and Castor's ex-girlfriend, and her son Adam, of whom Castor is the father. Archer sees a lot of his own son in Adam.

FBI Director Victor Lazarro () berates Castor (as Archer) for his unnecessary carnage with the terrorists and becomes suspicious that Castor (as Archer) may be in league with the terrorists. Castor (as Archer), still angry over the death of Pollux, confesses his true identity to Lazarro and kills him, blaming Lazarro's death on a heart attack. As a result, Castor (as Archer) becomes appointed as the new acting-FBI Director. Meanwhile, Archer (as Castor) returns to his suburban home and tries to explain the entire situation and convince his wife, Eve, that he is really Archer, but to no avail. After an analysis of Castor's DNA, Eve still does not believe, but after Archer told her the story of how they had their first kiss, she eventually realizes the truth.

Sasha and Archer (as Castor) track Castor (as Archer) to Lazarro's funeral, where Castor (as Archer) is holding Archer's wife () and daughter Jamie () hostage. Upon meeting each other face-to-face once again, Castor (as Archer) admits to Archer (as Castor) that he had no intention of killing Archer's son, Michael, as he only wanted to killed Archer (as Castor). The ensuing standoff following the funeral leads to a gunfight in which Sasha and all of Castor's minions are killed. Having taken a bullet to save Archer (as Castor), Sasha begs him not to let Adam grow up a criminal, before she dies. Castor and Archer engage in both a gunfight and hand-to-hand fight, with Archer gaining the upper hand. Jamie finds a gun and shoots at Archer, believing him to be Castor, and wounds him in the shoulder, allowing Castor to break free. Castor takes Jamie hostage but she gets him to let go by stabbing him in the leg &mdash; ironically a trick which he himself taught her earlier.

Castor manages to escape in a boat, pursued by Archer. After a lengthy chase both Archer and Castor's boats are destroyed and they are thrown ashore by an explosion. The two engage in a final confrontation and Archer (as Castor) eventually prevails by killing Castor (as Archer) with a spear gun, (which leaves Castor in the same position as the statue shown earlier of on the cross) but not before Castor tries to destroy Archer's face (on himself) to prevent Archer reclaiming it. Archer's wife is able to explain the entire situation to the FBI and successfully convince them of Archer's true identity and the face swap is reversed, with the exception of his scar (Archer was wounded in the incident where his son was killed), as he doesn't "need it anymore". The film ends with Archer(with his face restored) adopting Adam Troy, Castor Troy's son, into his family, fulfilling Sasha's request of not letting Adam grow up to be a criminal.

Originally the film was to be set in the far future and was to star and in the lead roles. Another pairing that was considered was that of and . ["Empire" - "Special Collectors' Edition - The Greatest Action Movies Ever" (published in 2001)] When the film was eventually made, Douglas was an executive producer.

John Woo was offered a chance to direct but declined unless the studio agreed to give him more creative control than he had received on his previous American films. Travolta had previously starred in Woo's "Broken Arrow" (Cage was later to star in another Woo film ""). Woo set the movie in the present so he could focus on the psychological elements of the story, such as the effect that the feud between the two men has on Archer's family.

Costing $80 million to make, "Face/Off" made heavy use of action set pieces including several violent shootouts and a boat chase. It was filmed in the Los Angeles area. [cite web|url=http://imdb.com/title/tt0119094/locations|title=Filiming locations for Face/Off|publisher=|accessdate=2007-06-06] In line with Woo's style from his earlier films, many action scenes were filmed in . [cite web|url=http://imdb.com/title/tt0119094/trivia|title=Trivia for Face/Off|publisher=|accessdate=2007-06-06]

The names Castor and Pollux come from a pair of brothers from which also features the city of . The story itself, most notably the hatred between Archer and Troy, is very similar to that of and , who fought against each other in the .

Pollux is held at Erehwon prison, a secret jail for top terrorists. The inmates do not even know which part of the country they are in. "Erehwon" is "nowhere" in reverse.The reversal is taken from the title of an allegorical novel by Samuel Butler.

The battle in the church, which includes s flying around and religious artifacts being destroyed, is similar to the final confrontation in Woo's classic film "The Killer". Doves are a symbol of peace.

The film was released on in the United Kingdom on by , and was released in the United States on by [ [http://www.highdefdigest.com/news/show/Paramount/Disc_Announcements/Breaking:_Paramount_Unveils_Blu-ray_Launch_Plans/1696 Breaking: Paramount Unveils Blu-ray Launch Plans | High-Def Digest ] ] .

Garnering largely positive reviews and high box office earnings, the film was a critical and financial success. The role reversal between Travolta and Cage was a subject of praise, as were the stylized, violent action sequences. Critic of the remarked that "Here, using big movie stars and asking them to play each other, Woo and his writers find a terrific counterpoint to the action scenes: All through the movie, you find yourself reinterpreting every scene as you realize the "other" character is "really" playing it." [cite web|url=http://rogerebert.suntimes.com/apps/pbcs.dll/article?AID=/19970627/REVIEWS/706270301/1023|author=Ebert, Roger|title=Face/Off|publisher=|date=1997-06-27|accessdate=2007-06-05] 's said of the film, "You may not buy the premise or the windup, but with Travolta and Cage taking comic and psychic measures of their characters and their own careers, there is no resisting "Face/Off". This you gotta see." [cite web|url=http://www.rollingstone.com/reviews/movie/5947489/review/5947490/faceoff|publisher=|title=Face/Off|author=Travers, Peter|date=2001-02-09|accessdate=2007-06-05]

Some critics felt the film's violence was overkill, and that the action sequences dragged out too long. Barbara Shulgasser of the called the movie "idiotic" and argued that "a good director would choose the best of the six ways and put it in his movie. Woo puts all six in. If you keep your eyes closed during a Woo movie and open them every six minutes, you'll see everything you need to know to have a perfectly lovely evening at the cinema." [cite web|url=http://www.sfgate.com/cgi-bin/article.cgi?f=/e/a/1997/06/27/WEEKEND590.dtl|author=Shulgasser, Barbara|title=Trading Faces|publisher=|date=1997-06-27|accessdate=2007-06-05]

"" was a inverted face-to-face boomerang roller coaster at theme park in Cincinnati, Ohio. After the sale of the Paramount Parks to theme park conglomerate , the Paramount movie names had to be removed, and the ride was renamed Invertigo. 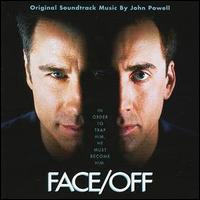 Several pieces of music and songs were used in the film but not included in the soundtrack. [cite web|url=http://imdb.com/title/tt0119094/soundtrack|title=Soundtracks for Face/Off|publisher=|accessdate=2007-06-05] These include: