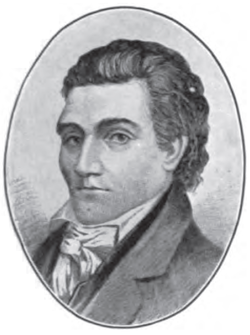 The son of German immigrants Jacob Baum and Magdalena Elizabeth Kershner, Baum fought with General Anthony Wayne at the Battle of Fallen Timbers.

After settling in Cincinnati, Baum became active in civic affairs, and was elected mayor in 1807 and 1812.[2][3] Through his agents in Baltimore, New Orleans and Philadelphia, Baum attracted a great number of German immigrants to work in his various enterprises — steamboats, a sugar refinery, a foundry and real estate.[4] Baum founded the Western Museum, was active in the first public library 1802, and was one of the main pillars of the First Presbyterian Church. He married Anna Somerville Wallace in 1804.

He bought the 9-acre (36,000 m2) property on Pike Street in 1812, to build his home. Baum completed construction about 1820, the building, once lived in by Nicholas Longworth (the first) and David Sinton is now the Taft Museum. The building is the best example of the Federal style in Cincinnati. Baum was caught in the financial upheaval of 1819-20, he was eventually forced to deed his home back to the Bank of the United States in 1825.

Baum died during an influenza epidemic. He was buried in the First Presbyterian Ground. On 6 June 1853 his body was moved to Spring Grove Cemetery.