Club Deportivo Universitario San Francisco Xavier is a professional football team based in Sucre, Bolivia that competes in the Bolivian Primera División.

The club has only two titles in its history and also has three international appearances on continental tournaments of South America, one in the Copa Libertadores and two in the Copa Sudamericana, the most notable in the 2010 season of that tournament, finishing in the Round of 16.

Universitario's home matches are played at Estadio Olímpico Patria since 1992, the complex count with 20.000 spectators. The also club is owned by the Sucre's public academy, University of Saint Francis Xavier of Chuquisaca.

Universitario was established under the expectation of the teacher Alfredo Sandi on 5 April 1962 under the name of Medicina. In the first seasons of the team, the club has the support of the "Father of the Universitary sport" and the moral and material support of the lawyer Oscar Salas, in this moment rector of the Saint Francis Xavier University.

A memorable day for the club was when the team play his first match in its history against Ciencias Económicas at Cancha del Seminario (today Complejo Deportivo Universitario). In the half-time of the game, Sandi was to congratulate to the players and also proposed to the team to representate to the University in the championship of the Asociación de Fútbol de Sucre (AFS). The propose was accepted by the players and the young students are committed to participate in this tournament.

In the committee of the AFS, the club was enrolled in the association under the name of Club Universitario for play in the Copa Simón Bolívar, the second tier of Bolivia. The first uniform of the club was a white kit with a blue strip, blue shorts and white socks. Subsequent, was formalized the red kit with a letter U in the chest and blue shorts.

In 2005, Universitario achieved 49 points in the regional league of Sucre, qualifying to the Group B of the Copa Simon Bolivar, finally the club ended in the first place of the group with 13 points, now qualifying to the playoffs. Sucre achieve reach to the final, defeating Guabirá in the game for an aggregate result of 8–1, after of win the tournament, the club was promoted to the first tier and qualified to the 2006 Copa Sudamericana.

In the first season of Universitario in the first division, the club finished in the third place of the regular fase with 42 points, qualifying to the final hexagonal. In the hexagonal, the club ended in the fourth position. In the Copa Sudamericana, Sucre won for an aggregate result of 3–2 to Bolívar in the club's debut for the tournament, however Universitario was eliminated by El Nacional of Ecuador in the next round. In the next season, Universitario was nearly relegated after of finish in the 11th place (the penultimate place) with 25 points, one point over the relegated team Real Mamoré.

In 2008, the club achieved his first title in Primera División during the Torneo Apertura, finishing in the first position with 43 points, also qualifying to the Group 5 of the Copa Libertadores 2010. In his debut for the Libertadores, Universitario tied 1–1 with Deportivo Quito at Sucre. However Sucre, only finished with two points in the group, this two points were obtained in Bolivia for the advantage of the altitude. Whilst in the league the club finished in the fifth position with 33 points in the Apertura and in the Clausura in the second place of the Group B with 18 points.

In the season 2010, because of be the winner of Apertura Loser's Hexagonal, the club was qualified to the Copa Sudamericana 2010. Universitario debuted in the tournament with a home victory 2–0 in the first round, against the Chilean champion of the Libertadores 1991, Colo-Colo, with the goals of Roberto Galindo and Sacha Lima. After of the same game, the left back of the chilean club, Roberto Cereceda was involved in a doping controversy, with a risk a two-year ban for part of the CONMEBOL. In the rematch, "the doctos" were nearly eliminated of the tournament, after of loss 3–1 at Santiago. In the next round, Sucre won 1–0 over Cerro Porteño with a goal of Galindo at Estadio Olímpico Patria, however in Paraguay once Galindo saved to the "doctos" after score two goals in a 2–2 draw at the Estadio Defensores del Chaco. Now in the round of 16 of the tournament, Universitario played with a hard rival, the brazilian side Palmeiras, being finally eliminated by the Brazilians for an aggregate result of 4–1. In the Clausura, Sucre ended in the 12th place (last position) with 22 points.

Universitario's biggest rival is Real Potosí from Potosí, despite both cities not having a regular 1st division team, they enjoy a heated derby between their teams and usually the matches have crowds up to 20.000 spectators.

The current South Bolivia derby started in 2006, with both teams being dominant when playing home as an away win on official tournaments is yet to be seen. 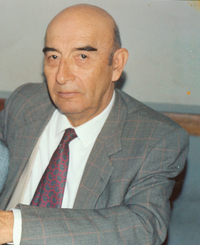 Carlos Tellez, one of the founders and first club's vicepresident

The club's institution is owned by Sucre's public university, the University of Saint Francis Xavier of Chuquisaca. The first board of Universitario was elected by the sport secretaries of each student center and the first club's directive was composed by students of his university.