In the aftermath of World War I, disabled veterans in the United States found themselves seriously disadvantaged, with little governmental support.[2] The idea to form the Disabled American Veterans arose at a Christmas party in 1920 hosted by Cincinnati Superior Court Judge Robert F. Marx, a captain who had been injured in the Meuse-Argonne Offensive in November 1918. Although it had been functional for some months by that time, the Disabled American Veterans of the World War (DAVWW) was officially created on September 25, 1920, at its first National Caucus, in Hamilton County Memorial Hall in Cincinnati.[3] While touring across the U.S. as part of the election campaign of James M. Cox, Judge Marx publicized the new organization, which quickly expanded. It held its first national convention in Detroit on June 27, 1921, at which time Marx was appointed the first national commander. In 1922, a women's auxiliary organization was founded. The DAVWW continued working through the Great Depression to secure the welfare of disabled veterans, although their efforts were troubled by fundraising challenges and the desire of the public to put the World War behind them. In the midst of these troubled years, DAVWW was issued a federal charter by Congress, on June 17, 1932.[4]

The demands of World War II required the urgent expansion of the organization, which officially changed its name to Disabled American Veterans to recognize the impact of the new war.[5] In 1944, the DAV began offering a National Service Officer Training Program at American University in Washington, the first step of education that completed with a two-year mentorship program. The DAV expanded its efforts in a new way in 1945, when it first began distributing and then manufacturing "IdentoTags", miniature license plates which could be attached to a keyring with instructions that lost keys should be mailed to the DAVWW, who would return them to the owners.[4] The program proved long-lasting and highly successful, both in bringing in donations and employing veterans in manufacture. By 1952, 350 people were employed in the endeavor, which brought in over $2 million a year in donations.[4] Meanwhile, the number of disabled veterans had been increased by the still-ongoing Korean War.[6]

The DAV suffered a decline in the later 1950s and into the 1960s, with diminishing leadership and funds, but it rallied around the veterans of the Vietnam War and also focused heavily on working for prisoners of war and missing in action.[6] Vietnam veterans soon filled the diminished ranks of the National Service Officers. On Veterans Day, 1966, the DAV moved its headquarters to Cold Spring, Kentucky. The following year, the IdentoTag program was discontinued in favor of providing address labels, with a request for donation, when changes in license plate practices made continuing the IdentoTag program impracticable.

The DAV underwent substantial change in 1993, when internal arguments concerning the governance of the organization led to a watershed election that turned over the administration to new hands and the National Service Program was overhauled.[7] 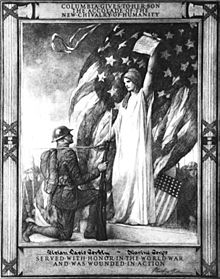 A military certificate inspired the logo.

The organization's logo has since its foundation featured a World War I soldier, armed, kneeling before Columbia, who dubs the man knight. The logo design was taken from certificates used in World War I for sick and wounded veterans.[5] A painting by Edwin Blashfield, commissioned by Woodrow Wilson, the certificate featured above the words "Columbia Gives to Her Son the Accolade of the New Chivalry of Humanity" and, below, the words "Served With Honor in the World War and Was Wounded in Action."[8]