After the death of the insane Judge Cal, McGruder was appointed to eliminate corruption from the discredited Special Judicial Squad. She was head of the SJS from 2101 to 2104.[1]

She led the resistance to the invading forces during the Apocalypse War after Chief Judge Griffin was killed and Judge Dredd was taken prisoner. As the only surviving member of the Council of Five after the war, she became chief judge by default.[2] In her first term she established herself as one of the city's most able rulers as she set about rebuilding the war-torn city.[3]

She resigned after four years in office following the Seven Samurai incident, blaming herself for a massacre she thought she could have prevented (although most of her colleagues were more forgiving and begged her to stay), and took the Long Walk into the Cursed Earth. (Her final act in office was to dismiss all of the senior judges who disagreed with her decision to resign, saying this proved they were incapable of proper judgement!) She was succeeded as chief judge by Thomas Silver.[3]

Her years in the Cursed Earth had had a damaging effect on her mental health, leaving her with a volatile temper, cruder mannerisms and (it was implied) a degree of multiple personality syndrome as she began referring to herself as "we".[4] She also looked visibly older and her facial hair began to grow unchecked. She ran into Dredd during the Necropolis crisis (ambushing his transport on assumption it contained criminals) and returned with him to fight the Dark Judges. With Silver missing and presumed dead, she subsequently returned to the office of chief judge.[5]

Her first task was to once more get the city and Judge force back on their feet, as well as to deal with all the dead. She decided not to appoint a Council of Five, but instead take advice from any and all Senior Judges when the time came; in an early such discussion, on Dredd's advice, she agreed to a public referendum over whether the Judges should continue to rule the city. She also became snappy with some of the Senior Judges, accusing Judge Grice and others of coming under the Dark Judge's control due to weakness. [4] She entered talks with Murphyville, the megacity in former Ireland, trying to get them to sign the Judicial Charter.

The circumstances of her return to office caused a constitutional crisis in the following year, when an undead Silver returned to reclaim the office which he asserted was rightfully his. The dispute was settled by Dredd himself, who ruled in Silver's favour, before executing Silver's zombie for gross dereliction of duty during the Necropolis incident.[6] She would go on to lead Mega-City One during the Judgement Day crisis, personally fighting the zombie hordes on two occasions.

However, following Judgement Day her second term became increasingly beset with doubts about the quality of her leadership and her sanity. To cover up the losses of Judges from the recent crises, she began a programme of robot judges which went disastrously wrong. However, she kept trying to revive the Mechanismo project despite clear evidence it was unworkable, and without a formal body like the Council of Five there was no way to oppose her if she would not listen to advice. In 2116 a deputation of senior judges - including Dredd - attempted to persuade her to reform the Council (with a view to then removing her from office), but they were unsuccessful, partly as she realised they'd try to do away with her.[7] She also oversaw an attempt to remotely control the alien dune sharks in the Cursed Earth, though even the scientists working on this had no idea why she wanted it done.

Her final attempt to revive Mechanismo caused the robots themselves to try and assassinate her. By this point, Dredd was under arrest for his unlawful attempts to stop the project and McGruder's growing madness had embarrassed her on a tour of the colony world Hestia. When the assassination attempt was uncovered, and when Dredd was the sole reason she (and others) survived it, she pardoned him, scrapped the project, and agreed to stand down from office. [8] She was succeeded by Judge Hadrian Volt.

Declining to take the Long Walk again, she became a civilian and decided to write her memoirs. In her retirement she developed Alzheimer's disease and her mental health rapidly deteriorated even further.[9] When Judge Dredd heard that she had been scheduled for compulsory euthanasia he abducted her and led her to a more honourable death fighting criminals in the Cursed Earth.[10] The facts of her death were covered up.[11]

A Mega-City One battleship and a street were named after her in her honour.[12] 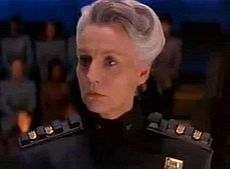 In the 1995 feature film there was a character called Judge Evelyn McGruder who was played by Joanna Miles. Her appearance is based on McGruder and her role in the movie is to serve as prosecutor in the trial of Judge Dredd (Sylvester Stallone) for murder. During the trial she reveals that all lawgivers fire rounds with the DNA code of the Judge to whom the weapon belongs, thus making identification of the shooter possible with the recovery of the slugs from a victim. She successfully prosecutes Dredd. She was later shot dead along with the Council by Rico.