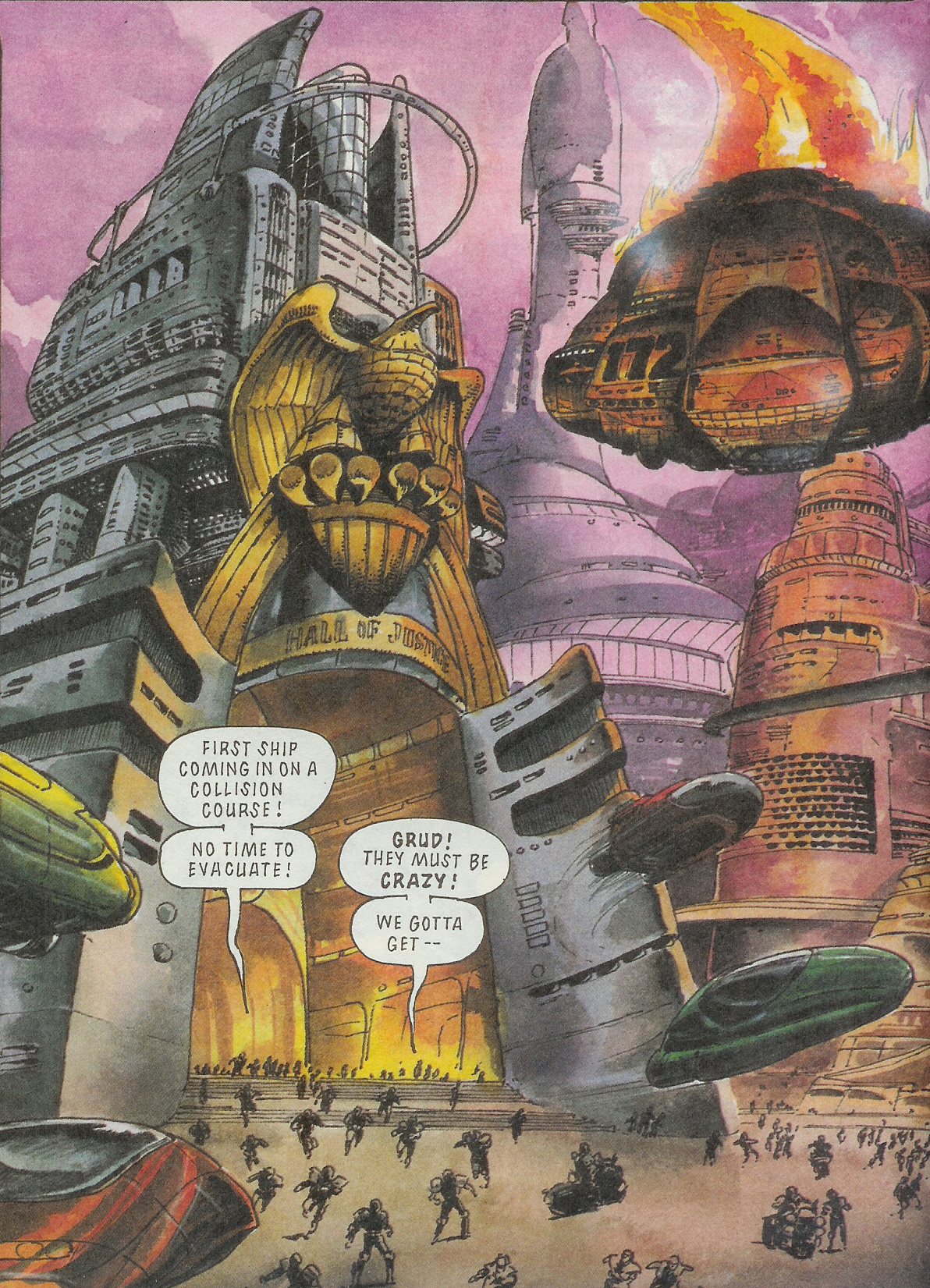 imagesize =
caption = The definitive version of the current Grand Hall, designed and painted by .
publisher =
debut =
creators =
type =
building=y
residents =
races =
locations =
subcat = Judge Dredd
altcat =
sortkey = PAGENAMEThe Grand Hall of Justice of is a fictional building in the "" comic strip in "2000 AD". It actually refers to three different buildings which existed at different times. The Grand Hall has been an important setting in several "Judge Dredd" stories, and one story, "The Prankster" (prog 308), was written specifically about it.

The Grand Hall is the headquarters building of the Justice Department of Mega-City One. Since Justice Department is responsible not only for law enforcement but for most arms of government, the Grand Hall is essentially the central government building of the whole city-state of around 400 million people. As well as containing government offices it also contains the living quarters of several senior judges (including Dredd since 2124), a well-stocked armoury, and two public museums. The Hall of Heroes commemorates the most distinguished heroes and judges of the city, and contains the of the first chief judge, . The Black Museum contains exhibits relating to the city's most notorious criminals. was held prisoner there, trapped in 's body, as an exhibit between his first capture and his first escape (2102&ndash;2103).

The Grand Hall is located in Sector 1, and has been rebuilt twice.

The original Grand Hall was built in the mid twenty-first century. It had a secret tunnel to the outside, which could be used to escape in time of crisis, or to infiltrate the building if it fell into enemy hands. The interior access to the tunnel was concealed under Fargo's sarcophagus.

When the building was occupied by Soviet forces during the of 2104, Judge Dredd used the tunnel to enter and exit the building on a covert mission. During his escape he was detected by the enemy and was forced to use incendiary bullets to cover his retreat. The fire took hold and spread, consuming the whole building.

After the War ended, the was used as a temporary headquarters building until a new Grand Hall could be built.

The new Grand Hall of Justice was completed in early 2105. It was a marked improvement on the old one: it was designed to withstand a direct hit from a nuclear warhead! It was opened by Chief Judge McGruder at a well-attended ceremony, but as soon as she cut the ribbon and pronounced the building open, the whole structure was completely destroyed by carefully placed bombs concealed inside.

Nobody was hurt in the explosion, which was quickly identified as the work of an infamous criminal known as "The Prankster." The Prankster was an eccentric millionaire who enjoyed playing practical jokes on people, and had always avoided capture. Realising that the only way to catch him was to entice him with a bait he could not refuse, Dredd announced that the third Grand Hall would be opened in time for . True to form, the Prankster attempted to destroy the new building, but this time he was arrested, and the third Grand Hall survives to this day.

The third Grand Hall followed the same design as the second one, and is theoretically nuclear bomb-proof. In 2108 it survived a -style attack by a hijacked spaceship completely unscathed. However a similar attack in 2115 disabled the building's security and left it vulnerable to invasion, and in 2125 conventional explosives were used to breach the foundations and gain access from the Undercity. Therefore its design is not always 100 percent successful.

Since 2113 the Grand Hall has been haunted by the ghost of the late . Actual sightings have not occurred; rather it takes a more subtle form such as locked doors inexplicably being found unlocked and things of that nature. reported a barely-detectable presence of an unidentified entity seeking an acceptance it could never find.

Attacks on the Grand Hall

The Grand Hall (in all of its incarnations) has come under attack numerous times, and on more than one occasion has actually been occupied by an enemy. Although supposedly impregnable, the following list suggests that security still leaves room for improvement!

The official appearance of the third Grand Hall of Justice was designed by artist in 1983 (top right), and was first shown in prog 308 of "2000 AD". This version has been shown in the comic many times, both in stories by Ezquerra and in those by other artists. However alternative designs have occasionally been used in the comic. In the 1995 Judge Dredd film the building was depicted as an eagle with outstretched wings, and this design was copied in the 2003 .

The Black Museum is the setting for "Tales from the Black Museum", a series of short stories in the "". The stories are written in the style of Tharg's Future Shocks and have twist endings, each based around the background to an exhibit in the collection. The Black Museum is inspired by a real , a display of criminal in . [http://www.met.police.uk/history/crime_museum.htm]