The Millenium Hilton is a Hilton hotel in Lower Manhattan, New York City, located at the southeast corner of Fulton Street and Church Street. The hotel is adjacent to the World Trade Center site, where the new World Trade Center complex is being built.

The name of the hotel is spelled "Millenium" on the outdoor signage and official literature, even though the correct spelling of the English word is "millennium". The building is 55 storeys tall and has 471 guest rooms.[2] 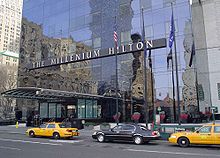 Entrance to the Millenium Hilton

The hotel was developed by Peter Kalikow at a cost of $200 million and opened in September 1992.[3] Soon after opening the hotel, Kalikow went into bankruptcy and was forced to sell the hotel. It was bought in June 1994 by CDL Hotels from Kalikow Fulton Church Realty for $75 million.[4] At that time, Hilton began managing the property.[5]

The hotel is considered a "cousin" to the Millennium Broadway and Millennium UN Plaza hotels but its management is under the control of Hilton Hotels Corporation with oversight by Millennium Hotels, North America.

Image of the World Trade Center site, facing the Millenium Hotel (the farthest left of the orange mesh covered buildings), 17 days after the September 11, 2001 terrorist attacks

The building suffered extensive damage from the terrorist attacks of September 11, 2001. It was completely refurbished and reopened in May 2003. One man witnessed the second plane hit the towers from his 50th floor room. He described it by saying, "It had its nose down, and it was hauling ass." (as seen from the History channel 9/11 special).