"Chick Cancer" is the seventh episode of season five of Family Guy. The episode originally broadcast on November 26, 2006. In the episode, Stewie's old friend and child actress, Olivia Fuller (voiced by Rachael MacFarlane) returns to Quahog. Stewie intends to sabotage what little is left of her career, but ends up falling in love with her, only for the relationship to end in ruins due to his personality. Meanwhile, Peter decides to make a chick flick after enjoying one he saw in the cinema with Lois.[1]

The episode was written by Alec Sulkin and Wellesley Wild and directed by Pete Michels. It received mostly positive reviews from critics for its storyline and many cultural references. According to Nielsen ratings, it was viewed in 9.49 million homes in its original airing. The episode featured guest performances by Drew Barrymore, Jeff Bergman, Dave Boat, Lizzy Caplan, Rachael MacFarlane and Stacey Scowley, along with several recurring guest voice actors for the series.

Stewie discovers that his old friend, Olivia, a child actress, is coming to the end of her Hollywood career because her "Tasty Juice: Drink it then Convert it to Pee." advertisement campaign has been dropped, and is making an appearance at the Quahog mall to open a new store. He decides to go the mall when he expects to ridicule her, but falls in love with her after seeing her again. Olivia, however, does not return the same feelings, so Stewie seeks advice from Brian on how to make Olivia like him. Brian and Stewie observe next-door neighbor Glenn Quagmire forcing a woman to have sex with him by threatening her, and Stewie comes to the conclusion that women respond to men who mistreat them.

Stewie and Olivia begin to bond shortly afterward, and the two spend their time bonding by sitting in a park while eating ice cream. As they sit and eat their ice cream, they observe various people, such as a man smelling his own hand, a Jewish cowboy, a man who cuts his own hair, and an uptight and hardworking Asian man who is looking at his watch. They also go to a birthday party for one of Olivia's friends. Olivia introduces Stewie to her old friend, a child actor named Victor, and she obliges Stewie to get both of them punch, but a jealous Stewie only wishes Victor to go away. The couple begin to argue constantly, and their latest argument ends with them getting married. After the marriage, which Rupert officiates, their relationship does not get any better. Later, the couple decide to accompany Brian on a double-date with his girlfriend, Jillian. During the date, the pair continue to bicker throughout, leading to Stewie starting an argument with a person in the restaurant who asks him to be quiet. He feels the relationship is failing, but Brian encourages him to reconsider and Stewie agrees to return to Olivia. Returning to his playhouse, Stewie discovers Olivia is cheating on him with her friend Victor (although the two are just playing with silly putty). With the relationship over, a seemingly distraught Stewie leaves the playhouse, which the then sets on fire with both Olivia and Victor inside: whether they survive or perish is not determined.

Meanwhile, Peter watches a chick flick with Lois, and is deeply moved by it. After renting several other chick flicks, Peter decides to make one of his own with his friends, entitled "Steel Vaginas". The plot of it stars Peter as a man who claims he does not care much for women until he meets "Vageena Hertz", played by Lois, who is also his own daughter in the film. After Vageena almost drowns, she is rushed to the hospital, but dies of an angry hymen. The film ends and is received badly by Peter's friends due to its poor plot outline, structure and not making any sense. This leaves Peter crushed and, of course, he realizes that he's not cut out for making movies.

During the closing credits of the episode, Stewie talks with Brian about how he does not like women and relationships, he talks about how he wishes that he could do the same thing with the same sex so Brian says, "They do; it's called being gay." to which Stewie replies, "Oh, that's what gay is? Oh, yeah, I could totally get into that." 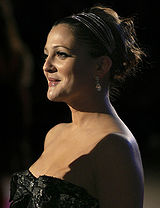 Many of the jokes used in the storyline of this episode were originally pitched for a subplot of this episode, which saw Stewie building a robot suit to make him look like an adult to woo Jillian's best friend Ana, but this particular subplot was never used.[2][3] The scene showing a mayor advertising a 1980s-related CD was included in the original draft for the episode, and, as MacFarlane states, is one of the rare occasions that an act break that is unrelated entirely to the storyline can be included in an episode.[2][4] Originally, the gag of Stewie using Brian's hair to pass it off as his pubic hair was going to be the only area of his body where he would tell Jillian about his hair, but MacFarlane states that the show was not allowed to mention only pubic hair, and had to steer to a different area on the body that would have hair too, if they wanted to include it.[2][3] Broadcasting standards allowed the sketch where Peter says "before, women only made me cry through my penis," as he states they "gave in."[2][3]

In a slight improvement over the previous week, the episode was viewed in 9.49 million homes in its original airing, according to Nielsen ratings. The episode also acquired a 3.3 rating in the 18-49 demographic, slightly being edged out by The Simpsons, while still winning over American Dad!.[5]

Dan Iverson of IGN wrote "this week was confirmation of the show's quality, as 'Chick Cancer' proved that the program could create hilarious flashbacks, while presenting a story that added a lick of satire to improve on the overall quality of the show."[6] In a review of the episode, Brett Love of TV Squad wrote "I'm still calling this an up and down season overall, but this episode was one of the upswings," adding that "There were some truly great moments." Later in the review, Love comments "If there was anything I didn't like about the story it was that bad boy Stewie was so short lived."[7]