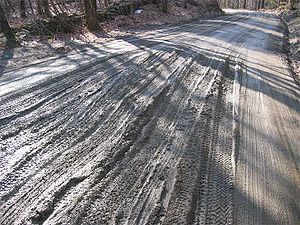 Mud Season is a term used to denote a time period in late Winter and early Spring. The name comes from dirt paths such as roads and hiking trails which become muddy from melting snow and rain. When the muddy paths and roads are traveled over by wheels, they develop ruts. It is regarded in some northeastern states within the United States, like much of New England as both a curse and a blessing because, although it is generally a messy time of year, it is an interlude between the standard tourist seasons of summer (hiking), fall (leaf peeping), and winter (skiing).

Mud season occurs only in places where the ground freezes deeply in winter, is covered by snow, and thaws in spring. Dirt roads and paths become muddy because the deeply frozen ground thaws from the surface down as the air temperature warms above freezing. The snow melts but the frozen lower layers of ground prevent water from percolating into the soil so the surface layers of soil become saturated with water and turn to mud.

It is also characterized by giant puddles on the side of paved roads, from large piles of snow melting, with no place to drain off to. Sidewalks, parking lots, drive ways, and all other surfaces become a muddy mess. Clothing is etched with drops of muddy spray, boots are covered in a layer of mud, either from traveling vehicles (cars or bikes,) and the back of pantlegs display a tell-tale spray pattern. The mud droplets are stubborn and cannot be removed with normal laundering techniques.

Rasputitsa of eastern Europe – a similar "mud season", twice a year, that partially stopped both Napoleon's and Hitler's invasions of Russia, each in their turn.