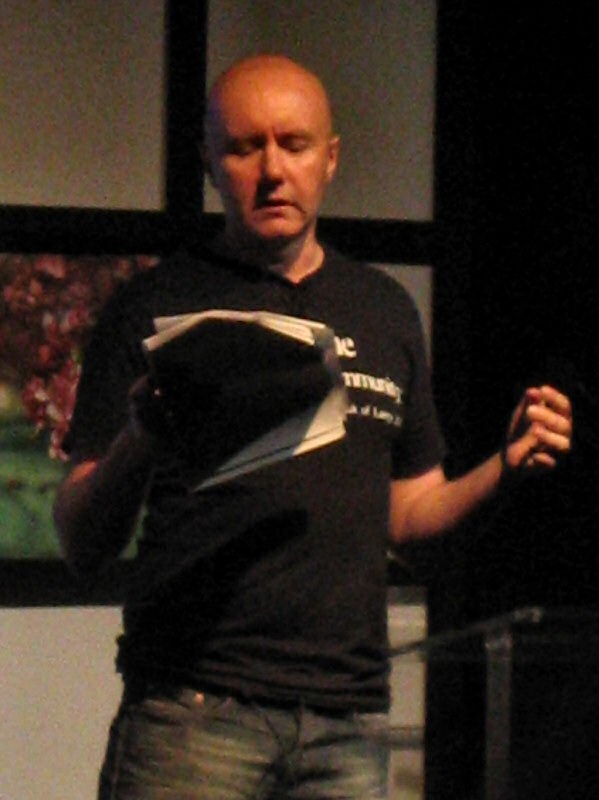 Irvine Welsh was born in Leith and moved with his family to , in Edinburgh, when he was four. His mother worked as a waitress, his father was a dock worker then a carpet salesman, who died when Welsh was 25. Welsh left Ainslie Park Secondary School when he was 16 and then completed a City and Guilds course in electrical engineering. He became an apprentice TV repairman until an persuaded him to move on to a series of other jobs.Fact|date=December 2007 He left Edinburgh for the London punk scene in 1978, where he played and sang in The Pubic Lice and Stairway 13, the latter a reference to the . He worked for Hackney Council in London and studied with the support of the Manpower Services Commission.Fact|date=December 2007

In the mid 1980s he became a minor property speculator, renovating houses in the rapidly gentrifying . After the London property boom of the 1980s, Welsh returned to Edinburgh where he worked for the city council in the housing department. He went on to study for an MBA at , writing his thesis on creating for women.

Welsh has made several reading tours around the world and has been involved with his beloved as a , promoter and producer. Like many of his characters, he supports Hibs. He met an American woman Beth Quinn, 26, when he was teaching creative writing in Chicago, and they were married in July 2005. He considers the age gap inconsequential. 'I've never felt tied to any one age ... I've never thought "I must find someone a couple of years younger than I am".' Welsh was married once before, in 1984 to Anne Ansty, however they divorced after almost 20 years.Fact|date=December 2007

He currently lives in , Ireland. In an interview with "" on 7 August 2006, he described himself as "not so much middle-class as upper-class. I'm very much a gentleman of leisure. I write. I sit and look out of my window into the garden. I enjoy books. I love the density and complexity of and . I listen to music; I travel. I can go off to a film festival whenever I like." He also describes himself as monogamous: "it sounds boring but it's the way I am".

To date, Welsh has published eight books. His first , "Trainspotting", was published in 1993. Set in the mid 1980s, it uses a series of loosely connected short stories to tell the story of a group of characters tied together by decaying friendships, and stabs at escape from the oppressive and brutality of their lives in the housing schemes. It was released to shock and outrage in some circles and massive acclaim in others; "" called it "funny, unflinchingly abrasive, authentic and inventive", and "The Sunday Times" called Welsh "the best thing that has happened to British writing for decades". One critic (Welsh's personal friend Kevin Williamson) went so far as to say that "Trainspotting" "deserves to sell more copies than ". It was adapted as a play, and a film adaptation, directed by and written by John Hodge, was released in 1996. Welsh himself appeared in the film as Mikey Forrester, a minor character. The film was a worldwide success. U.S. Senator decried its moral depravity and glorification of drug use during the 1996 presidential campaign, although he admitted that he had not actually seen the film (or, presumably, read the book).Fact|date=December 2007

Next, Welsh released "", a collection of short stories from "Rebel Inc.", "New Writing Scotland" and other sources. Many of the stories take place in and around the housing schemes from "Trainspotting", and employ many of the same themes; however, a touch of fantasy is apparent in stories such as "The Acid House", where the minds of a baby and a drug user swap bodies, or "The Granton Star Cause", where transforms a man into a as punishment for wasting his life. Welsh himself adapted three of the stories for a later film, which he also appeared in.

Welsh's third book (and second novel), "", alternates between a typically grim tale of thugs and schemes in sub-working class Scotland and a hallucinatory adventure tale set in South Africa. Gradually, common themes begin to emerge between the two stories, culminating in a shocking ending.

His next book, "" (1996), became his most high-profile work since "Trainspotting", released in the wave of publicity surrounding the film. It consists of three unconnected s: the first, "Lorraine Goes To Livingston", is a bawdy satire of classic British s, the second, "Fortune's Always Hiding", is a revenge story involving , and the third, "The Undefeated" is a sly, subtle romance between a young woman dissatisfied with the confines of her suburban life and an aging clubgoer. Most critics dismissed the first two as relatively minor affairs and focused their praise on "The Undefeated". Welsh's narration imbued both characters with surprising warmth, and the story avoided easy, pro-ecstasy conclusions.

A corrupt police officer and his tapeworm served as the narrators for his third novel, "Filth" (1998). Welsh had never avoided flawed characters, but the main character of "Filth" was a brutally vicious sociopathic policeman. His tapeworm was perhaps the most sympathetic character, a classic Welsh inversion.

"Glue" (2001) was a return to the locations, themes and episodic form of "Trainspotting", telling the stories of four characters spanning several decades in their lives and the bonds that held them together.

Welsh's novel, "" (2006), deals with a young, alcoholic civil servant who finds himself inadvertently putting a curse on his nemesis, a nerdy co-worker. In 2007, Welsh published "", his first collection of short stories in over a decade.

At the request of the "", Welsh travelled with a group of authors and journalists to the Sudan in 2001. A book called "The Weekenders: Travels in the Heart of Africa" was the result, to which Welsh contributed a novella called "Contamination", about the violence and warlords in the region. A second book, "The Weekenders: Adventures in Calcutta", was published in 2004. Welsh, , and each contributed a short story for the "One City" compilation published in 2005 in benefit of the One City Trust for social inclusion in Edinburgh.

As well as fiction, Irvine Welsh has written several stage plays, including "Headstate", "You'll Have Had Your Hole", and the musical "Blackpool", which featured original songs by of the .

More recently he coauthored "Babylon Heights" with his screenwriting partner . The play premiered in at the Exit Theatre and made its European premiere in , at where it was directed by Graham Cantwell and featured performances from actors , David Heap, Dermot Magennis and John Fitzpatrick. The plot revolves around the behind-the-scenes antics of a group of on the set of "The Wizard of Oz". The production included the use of oversized sets with actors of regular stature.

Cavanagh and Welsh have also collaborated on a number of screenplays. "The Meat Trade" is based on the 19th century . Despite the historical source material, Welsh has set the story in the familiar confines of present day Edinburgh, with Burke and Hare depicted as brothers who steal human organs to meet the demands of the global transplant market.

"Wedding Belles", a film made for Channel 4 that was written by Welsh and , aired at the end of March 2007. The film centres around the lives of four young women, who are played by , , , and Kathleen McDermot. Wedding Belles was nominated for a Scottish BAFTA and was subsequently sold to TV channels in Canada and Europe.

They are also currently working on several other projects for film and television.Fact|date=December 2007

Welsh has directed several short films for bands. In 2001 he directed a 15 minute film for Gene's song "Is It Over" which is taken from the album "Libertine". In 2006 he directed a short film to accompany the track "Atlantic" from Keane's album "". The video was written by . It went on to become the most watched C4 video exclusive of 2006.

Welsh recently directed his first short dramatic film, NUTS, which he co wrote with . The film features as a man dealing with in post Ireland.

In 2008, the film "Ecstasy" based on "The Undefeated" will be produced.

Welsh is often pigeonholed as a writer whose work concentrates on . However, most of his and is dominated by the question of and Scottish identity in the period spanning the 1960s to the present day. Within this, he explores the rise and fall of the council housing scheme, denial of opportunity, , football, , sex, suppressed , dance clubs, low-paid work, , , , class divisions, , and perhaps most of all, the humour, s, and axioms of the Scots.

Irvine Welsh is known for writing in his native Edinburgh Scots dialect. He generally ignores the traditional conventions of literary Scots, used for example by Allan Ramsay, , , , and James Orr. Instead, he transcribes dialects phonetically, a device popularised by authors such as and . Non-Scottish readers may have difficulty deciphering the language, and may miss some of the impact and references to football, , and Scottish everyday life in his work. For that reason, some international editions of his books have included brief glossaries at the end.

Like before him, Welsh also experiments with . A notable example is the book "Filth", where the tapeworm's is imposed over the top of the protagonist's own internal monologue (the worm's host), visibly depicting the tapeworm's voracious appetite, much like the 'Climax of Voices' in Gray's novel "".