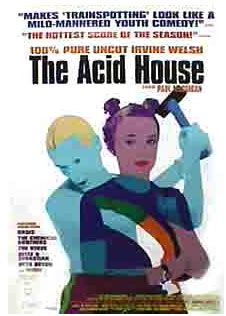 "The Acid House" is a film adaptation of 's collection "". Welsh himself wrote the , and appears as a minor character in the film.

The 1998 film, directed by Paul McGuigan, dramatises three stories from the book:
* "The Granton Star Cause" is a comedy, where Bob is having a very bad day indeed. His parents throw him out so they can indulge in and he is sacked from his job, dumped by his girlfriend and dropped from his football team. It has elements of 's "", as a pitiless God who transforms him into a fly as punishment for wasting his life.
* "A Soft Touch": plays a cuckolded husband while is Larry, the ruthless upstairs neighbour who steals his electricity and his wife, played by .
* "The Acid House": An acid trip and a bolt of result in amiable schemie Coco Brice exchanging places with the baby of a couple.

All three sections are independent, but are linked by setting and by the reappearance of incidental characters, in particular who appears variously as an inebriated wedding guest, a figure in a dream, and a pub patron. All three of his parts symbolize a human manifestation of God.

The film offended elements of the UK tabloid press with a depiction of a cynical and jaded, foul-mouthed God, and in some countries (such as Canada and the United States) has been shown on television with subtitles because of most characters' heavy Scottish accents.