Dubonnet
This article is about the alcoholic beverage. For other uses, see Dubonnet (disambiguation). 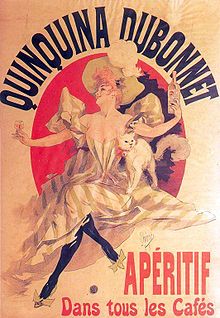 Dubonnet is a sweet, wine-based aperitif. It is a blend of fortified wine, herbs, and spices (including a small amount of quinine),[1] with fermentation being stopped by the addition of alcohol.

Dubonnet was first sold in 1846 by Joseph Dubonnet, in response to a competition run by the French authorities to find a way of persuading French Foreign Legionnaires in North Africa to drink quinine.[2] Quinine combats malaria but is very bitter.

The brand-name Dubonnet was taken over by Pernod Ricard in 1976. It was re-popularised in late 1970s by an advertising campaign starring Pia Zadora. It is available in Rouge, Blanc and Gold (vanilla and orange) varieties. Dubonnet is also widely known by the advertisement slogan of the French graphic designer Cassandre "Dubo, Dubon, Dubonnet", which still can be found on walls of houses in France. Dubonnet is commonly mixed with lemonade or bitter lemon, and forms part of many cocktails. Reputedly it is a favourite beverage of:

Dubonnet has been said to be similar to Buckfast Tonic Wine.[6]

Cocktails that include Dubonnet as one of their ingredients