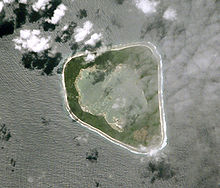 Though it has been occupied at various times in the past (including as late as 1963), Manra is currently uninhabited.

Manra is triangular in shape, measuring approximately 3.2 km by 2.8 km. It completely surrounds a hyper-saline lagoon without outlet to the sea, containing depths of five to six meters.[1] The island is covered with coconut palms, scrub forest, herbs and grasses, including the species Tournefortia, Pisonia, Morinda, Cordia, Guettarda, and Scaevola.[1] Manra was formerly a functioning copra plantation, though it is no longer.

Bird life is similar to the other Phoenix Islands, but has been described as "less abundant".[1] Hermit crabs and rats are plentiful on the island, which also supports colonies of feral dogs, pigs and cats. According to E.H. Bryan, "insects are abundant, including a blue and white butterfly, several kinds of moths, dragonflies, ants, flies, leafhoppers, bugs, beetles, wasps, and spiders".[1] Mosquitoes arrived in the late 19th century, on a ship from Tahiti.

The lagoon is too salty to support marine life, but fish are abundant around the fringing reef and offshore waters. Many Manra fish are reputed to be poisonous, due to certain seaweeds that form part of their diet. H.E. Maude, in his 1937 report: Colonization of the Phoenix Islands, indicated that visitors to the island refused to eat any fish caught there.[2] Bryan, on the other hand, insisted that the reef contains other fish species that made "excellent eating".[1]

A color photo of Manra can be seen at.[3]

Unlike some of the other Phoenix Islands, Manra contains definite evidence of prehistoric inhabitation, in the form of at least a dozen platforms and remains of enclosures in the northeast and northwest portions of the island. K.P. Emory, ethnologist at Honolulu's Bishop Museum, estimated that two groups of people were present there, one from eastern Polynesia, the other from Micronesia. Wells and pits from these early inhabitants were also found.[1]

Manra was discovered in 1823 from the London whaling ship Sydney Packet, T. Emmett Master, and was called Sydney. It is the birthplace of Sydney (Arundel) Aris (1884–1966), daughter of Lillie Arundel and John T. Arundel, who was named after the island on which John T. Arundel & Co. were then engaged in mining guano. Extensively mined for guano in the late 19th century, Manra was turned into a coconut plantation in the early 20th century. Later, it became one of the islands involved in the Phoenix Islands Settlement Scheme, the final colonial expansion of the British Empire. Approximately 130 settlers were imported, and a village constructed complete with radio shack, cement cistern and 15 water wells. Each adult settler was given fifty coconut palms, and each child granted two unplanted sections, 150 feet (80 m) square.[1] Ultimately, the colony failed, due to prolonged drought and the declining world market for copra.

Manra was completely abandoned between 1958 and 1963, and remains uninhabited today.