Crostau (Sorbian Chróstawa) is a village and a former municipality in the upper Lusatia in the district of Bautzen in eastern Saxony in Germany. Since 1 January 2011, it is part of the town Schirgiswalde-Kirschau. It has about 1,710 inhabitants (as of January 2006) on a surface of about 9.32 km², giving it a population density of about 183 inhabitants per km².[citation needed]

Crostau is situated in are the hills of upper Lusatia. It is surrounded by several important hills of this mountain region, such as the Kälbersteine (487 m), the Potsberg (448 m), the Wolfsberg (347 m), the Horken (307 m), and the Callenberger Berg (360 m).

Crostau is placed upon an old settlement area, even though the traces of settlement aren't as old as those in the plane of Bautzen. In lower Crostau, the first Slavic settlement dates back to the year 800 AD. With the big German settlement in the 10th up to the 12th century an older place was transformed into the small castel "Kroste". First it was used to save trade routes, later it became a place of robbers. In 1352, the castle had been destroyed by the "Six-cities-alliance" of upper Lusatia, which was the first time Crostau was mentioned in a written work. Crostau has been, for centuries, a seat of several nobel families like the "von Rechenberg" and the "von Watzdorf". In 1934 the former independent communities of Callenberg (sorabian: Chemmberk), Carlsberg and Wurbis formed the community of Crostau - in 1972 also Halbendorf (sorabian: Wbohow) became part of it. 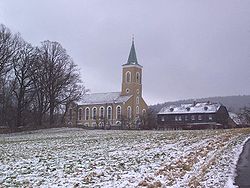 In 1869, the church with a famous organ built by the Saxon organ builder Gottfried Silbermann in 1732 was built up on an older site. Crostau traditionally is a Lutheran village. Today the churches of Crostau, Kirschau, and Schirgiswalde work closely together.

Since German reunification, the CDU (conservative party) is the leading political force in the community.

Crostau is far from the important highways of the region and has no industry, but it is linked to tourist parths and has beautiful surroundings. Most of the inhabitants work in other villages or towns of the region.