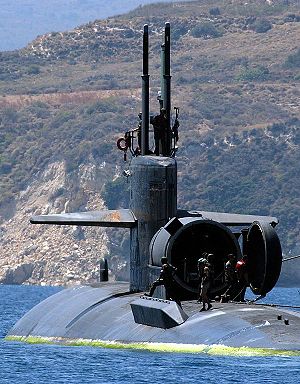 A Dry Deck Shelter (DDS) is a removable module that can be attached to a submarine to allow divers easy exit and entrance while the boat is submerged. The host submarine must be specially modified to accommodate the DDS, with the appropriate mating hatch configuration, electrical connections, and piping for ventilation, divers' air, and draining water.

The United States Navy's DDSs are 11.6 meters (38 feet) long by 2.7 meters (9 feet) high and wide, add about 30 tons to its host submarine's submerged displacement, can be transported by trucks or C-5 Galaxy aircraft, and require one to three days to install and test. They have three HY-80 steel sections within the outer glass-reinforced plastic (GRP) fairing: a spherical hyperbaric chamber at the forward end to treat injured divers; a smaller spherical transfer trunk; and a cylindrical hangar with elliptical ends. The hangar can support a Swimmer Delivery Vehicle (SDV), four Navy SEALs to man the SDV, and a crew of Navy Divers to operate the DDS and launch the SDV; or 20 SEALs with four Combat Rubber Raiding Craft (CRRC). [1]

There are currently six portable Dry Deck Shelters in use by the USN, the first one built by the Electric Boat. The first, designated DDS-01S ("S" for the side to which the hangar outer door opens), was completed in 1982. The remaining five, DDS-02P ("P" for port opening), -03P, -04S, -05S, and -06P, were built between 1987 and 1991 and were built by Newport News Shipbuilding.[3] The shelters are maintained by a combined effort of Navy Divers stationed on the teams and workers of the maintenance company Oceaneering. They have expected useful lives of about 40 years each.[4] 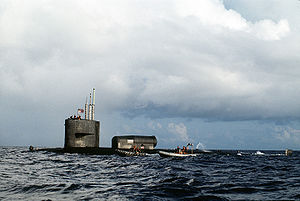 A pair of rigid-hulled inflatable boats operate alongside USS Archerfish (SSN-678) during a 1993 exercise. Archerfish has a Dry Deck Shelter attached to its deck.

† can carry two DDSs
‡ no longer in service

All Virginia-class submarines will have an integral Lock-Out Trunk capable of deploying divers and their equipment. The Ohio-class SSGNs have been converted to be capable of attaching up to two DDSs.