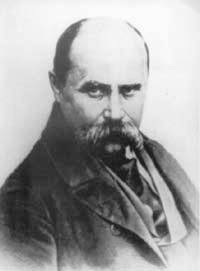 Taras Hryhorovych Shevchenko ( _uk. Тарáс Григóрович Шевчéнко) (OldStyleDate|March 9|1814|February 25 &ndash; OldStyleDate|March 10|1861|February 26) was a Ukrainian , and humanist. His literary heritage is regarded to be the foundation of modern and, to a large extent, the modern . Shevchenko also wrote in Russian and left many masterpieces as a painter and an illustrator.

Born into a serf family in the village of , of Kiev Governorate of the (now in , ) Shevchenko was orphaned at the age of eleven.

Engelhardt noticed Shevchenko's artistic talent and apprenticed him in to , then in Saint Petersburg to for four years. There he met the Ukrainian artist , who introduced him to other compatriots such as and , and to the Russian painter . Through these men Shevchenko also met the famous painter and professor , who donated his portrait of the Russian poet as a lottery prize, whose proceeds were used to buy Shevchenko's freedom on , .

In the same year Shevchenko was accepted as a student into the Academy of Arts in the workshop of . The next year he became a resident student at the "Association for the Encouragement of Artists." At the annual examinations at the , Shevchenko was given a Silver Medal for a landscape. In 1840 he again received the Silver Medal, this time for his first oil painting, "The Beggar Boy Giving Bread to a Dog."

He began writing poetry while he was a serf and in 1840 his first collection of poetry, "Kobzar," was published. , the renowned Ukrainian poet in the generation after Shevchenko, had this to say of the compilation: " ["Kobzar"] immediately revealed, as it were, a new world of poetry. It burst forth like a spring of clear, cold water, and sparkled with a clarity, breadth and elegance of artistic expression not previously known in Ukrainian writing."

In 1841, the epic poem "Haidamaky" was released. In September 1841, Shevchenko was awarded his third Silver Medal for "The Gypsy Fortune Teller." Shevchenko also wrote plays. In 1842, he released a part of the tragedy "Nykyta Hayday" and in 1843 he completed the drama "Nazar Stodolya."

While residing in Saint Petersburg, Shevchenko made three trips to Ukraine, in 1843, 1845, and 1846. The difficult conditions under which his countrymen lived had a profound impact on the poet-painter. Shevchenko visited his still enserfed siblings and other relatives, met with prominent Ukrainian writers and intellectuals such as: , , and , and was befriended by the princely family especially Varvara Repnina.

In 1844, distressed by the condition of Ukraine in the , Shevchenko decided to capture some of his homeland's historical ruins and cultural monuments in an album of etchings, which he called "Picturesque Ukraine".

On , , the Council of the Academy of Arts granted Shevchenko the title of an artist. He again travelled to Ukraine where he met the historian, and other members of the , a Pan-Slavist political society dedicated to the political liberalization of the Empire and transforming it into a -like polity of Slavic nations. Upon the society's suppression by the authorities, Shevchenko was arrested along with other members on , . Although he probably was not an official member of the Brotherhood, during the search his poem "The Dream" ("Son") was found. This poem criticized imperial rule, personally attacked Nicholas I and his wife Alexandra Feodorovna, and therefore was considered extremely inflammatory, and of all the members of the dismantled society Shevchenko was punished most severely.

Shevchenko was sent to prison in . He was exiled as a private with the Russian military garrison at , near , near the . Tsar Nicholas I, confirming his sentence, added to it, "Under the strictest surveillance, without a right to write or paint."

With the exception of some short periods of his exile, the enforcement of the Tsar's ban on his creative work was lax. The poet produced several drawings and sketches as well as writings while serving and traveling on assignment in the regions and areas on modern .

But it was not until 1857 that Shevchenko finally returned from exile after receiving a pardon, though he was not permitted to return to St. Petersburg but was ordered to . In May 1859, Shevchenko got permission to move to his native Ukraine. He intended to buy a plot of land not far from the village of and settle in Ukraine. In July, he was arrested on a charge of , but was released and ordered to return to St. Petersburg.

Taras Shevchenko spent the last years of his life working on new poetry, paintings, and engravings, as well as editing his older works. But after his difficult years in exile his final illness proved too much. Shevchenko died in Saint Petersburg on , , the day after his 47th birthday.

He was first buried at the in Saint Petersburg. However, fulfilling Shevchenko's wish, expressed in his poem "Testament" ("Zapovit"), to be buried in , his friends arranged to transfer his remains by train to Moscow and then by horse-drawn wagon to his native land. Shevchenko's remains were buried on May 8 on "Chernecha Hill" (Monk's Hill; now ) by the near . A tall mound was erected over his grave, now a memorial part of the .

Dogged by terrible misfortune in love and life, the poet died seven days before the Emancipation of Serfs was announced. His works and life are revered by Ukrainians and his impact on is immense.

Taras Shevchenko has a unique place in Ukrainian cultural history and in world . His writings formed the foundation for the modern to a degree that he is also considered the founder of the modern written (although pioneered the literary work in what was close to the modern Ukrainian in the end of the eighteenth century.) Shevchenko's poetry contributed greatly to the growth of Ukrainian national consciousness, and his influence on various facets of Ukrainian intellectual, literary, and national life is still felt to this day. Influenced by , Shevchenko managed to find his own manner of poetic expression that encompassed themes and ideas germane to Ukraine and his personal vision of its past and future.

In view of his literary importance, the impact of his artistic work is often missed, although his contemporaries valued his artistic work no less, or perhaps even more, than his literary work. A great number of his pictures, drawings and etchings preserved to this day testify to his unique artistic talent. He also experimented with photography and it is little known that Shevchenko may be considered to have pioneered the art of etching in the (in 1860 he was awarded the title of in the specifically for his achievements in etching.)

His influence on Ukrainian culture has been so immense, that even during Soviet times, the official position was to downplay strong expressed in his poetry, suppressing any mention of it, and to put an emphasis on the social and anti-Tsarist aspects of his legacy, the within the . Shevchenko, who himself was born a and suffered tremendously for his political views in opposition to the established order of the Empire, was presented in the Soviet times as an internationalist who stood up in general for the plight of the poor classes exploited by the reactionary political regime rather than the vocal proponent of the Ukrainian national idea.

This view is significantly revised in modern independent Ukraine, where he is now viewed as almost an iconic figure with unmatched significance for the Ukrainian nation, a view that has been mostly shared all along by the that has always revered Shevchenko.

Outside of Ukraine, monuments to Shevchenko have been put up in several location of the former USSR associated with his legacy, both in the Soviet and the post-Soviet times. The modern monument in was erected on , , but the first monument (pictured) was built in the city in 1918 on the order of shortly after the Great Russian Revolution. There is also a monument located next to the Shevchenko museum at the square that bears the poet's name in , (the location of the military garrison where the poet served) where there are also a street, a library and the Pedagogical Institute named to the poet.

After Ukraine gained its independence in the wake of the 1991 Soviet Collapse, some Ukrainian cities replaced their statues of with statues of Taras Shevchenko [Catherine Wanner, "Burden of Dreams: History and Identity in Post-Soviet Ukraine". Penn State Press: 1998. [http://books.google.com/books?id=k44rN1V8W90C&pg=PP1&dq=Burden+of+Dreams:+History+and+Identity+in+Post-Soviet+Ukraine&sig=MHhi4H5NhMKQPlGqFKggwd_EXks] ] and in some locations that lacked streets named to him, local authorities renamed the streets or squares to Shevchenko, even though these sites usually have little or no connection to his biography. These memorials testify, perhaps, to a greater spirit of patriotism than historical accuracy.

Outside of Ukraine and the former , monuments to Shevchenko have been put up in many countries, usually under the initiative of local s. There are several memorial societies and monuments to him throughout and the , most notably a monument in , near . There is also a monument in Tipperary Hill in Syracuse, , a park named after him in Elmira Heights, N.Y. and a street named after him in 's East Village.

The town of Vita in was originally named Shevchenko in his honor. There is a Shevchenko Square in located in the heart of the central district. The in , Manitoba, Canada, contains many images of Taras Shevchenko.

A two-tonne bronze statue of Shevchenko, located in a memorial park outside of was discovered stolen in December 2006. It was taken for scrap metal; the head was recovered in a damaged state, but the statue was not repairable.

In 2001, the Ukrainian society "" raised the initiative of building a Church near the in , where Taras Shevchenko is buried. [ [http://www.slovoprosvity.com.ua/modules.php?name=News&file=article&sid=198 Slovo Prosvity Article, in Ukrainian] ] [ [http://www.slovoprosvity.com.ua/modules.php?name=News&file=article&sid=150 Donations list for Kobzareva Church] ] The initiative got a rather supportive response in the society. Since than many charity events have been held all over the country to gather donations for the above purpose. A marathon under the slogan "Let’s Build a Church for the Kobzar" by the First National Radio Channel of Ukraine collected 39,000 s (about US $7,500) in October 2003. [http://www.risu.org.ua/eng/news/article;2431/ RISU Portal News] ]

English pop group released a live video in 1983 entitled "Taras Shevchenko" [See ] . The concert was recorded in the in , and featured the famous self-portrait of 1840 (as shown above) on its cover. In 2001 it was re-released on a called "316" (DVD containing a 1998 concert as well as the before-mentioned "Taras Shevchenko" recording).