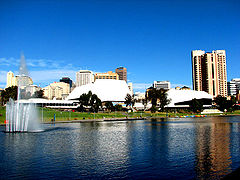 The Adelaide Festival Centre, Australia's first multi-purpose arts centre, was built in 1973 and opened three months before the Sydney Opera House. The Festival Centre is located approximately 50 metres north of the corner of North Terrace and King William Street, lying near the banks of the River Torrens and adjacent to Elder Park. It is distinguished by its three silvery-white geometric dome roofs and its plaza consisting of lego block-like structures to the south and lies on a 45-degree angle to the city's grid. It is the home of South Australia's performing arts.

As well as the now annual Festival of Arts, the Centre hosts the annual Adelaide Cabaret Festival in June and OzAsia Festival in September, and the biennial Adelaide International Guitar Festival.

The Southern Plaza was completed in March 1977, comprising a then-controversial environmental sculpture by West German artist Otto Hajek. No longer intact, the sculpture was conceived as a concrete garden and iconic City Sign. The lego-like forms and colourful paint work across the Plaza were designed to conceal an air-conditioning vent at the same time as providing a playful place to congregate. However, Adelaide's citizens never warmed to the idea, and it remains one of Adelaide's most under-utilised public spaces.[2]

The Festival Centre Plaza also serves as host to an outdoor collection of sculpture, including the prominent stainless steel Environmental Sculpture (also known as Tetrahedra), by Bert Flugelman.

In the 1960s, the Adelaide Festival of Arts started to outgrow the city's existing venues. Liberal Premier Steele Hall chose the banks of the River Torrens as the site for the Centre.

The Lord Mayor of Adelaide, Robert Porter, supported by Labor Premier and arts advocate Don Dunstan, launched a public appeal to raise funds to build the Centre and the appeal raised its target within a week. The centre was designed by architect John Morphett.[who?] Work began in Elder Park in 1970 and on 2 June 1973 the Festival Theatre opened. The Dunstan Playhouse, the Space Theatre and the Amphitheatre followed.

Performance and other venues

In 2003, the area around the Adelaide Festival Centre was substantially redeveloped by the State Government. The much-maligned Festival Plaza was redesigned, including opening the underground plaza to the sky and building a pedestrian suspension bridge to link the plaza to the nearby Riverbank Precinct, as well as a small number of cafés, restaurants and retail outlets. The Riverbank Precinct and Convention Centre were hoped to attract more people to the plaza and surrounding area, but due to the decision not to develop cafés and shops in the new precinct (in favour of more convention centre car parking), the area remains under-patronised.