The Alberta New Democratic Party or Alberta NDP is a social-democratic political party in Alberta, Canada, which was originally founded as the Alberta section of the Co-operative Commonwealth Federation. From the mid-1980s to 2004, the party abbreviated its name as the "New Democrats" (ND).

The Co-operative Commonwealth Federation (CCF) was founded in Calgary on 1 August 1932 but organised in fits and starts in Alberta due to lack of support from the United Farmers of Alberta (UFA). While most UFA Members of Parliament, led by William Irvine, the first president of the Alberta CCF, supported the CCF and ran for re-election (unsuccessfully) in the 1935 federal election as CCF candidates the UFA was also the governing party in the Alberta legislature and was more ambivalent. The CCF did not run in the 1935 provincial election because of its ties with the UFA. The UFA was defeated badly and fell into disarray. Federally, Eight of the UFA's Members of Parliament in the Canadian House of Commons ran as UFA-CCF candidates in the 1935 federal election - and we all defeated largely because of their association with the unpopular UFA government.[1] In 1936, William Irvine, a CCF founder and defeated UFA Member of Parliament, was elected the Alberta CCF's first president.[2] In 1937, the UFA decided to leave electoral politics entirely and, in 1938, the CCF committed itself to run candidates in the next provincial and elections setting up local riding clubs for that purpose.[2] Former UFA MLA Chester Ronning became the Alberta CCF's first leader in the 1940 provincial election but despite winning 11% of the vote the party was unable to win any seats in the Alberta legislature - the CCF was unable to win the support of the UFA's conservative supporters, or put a dent in support for the agrarian populism of the Social Credit Party of Alberta.[2][3]

The Alberta Labour Party federated with the CCF in 1935, but continued to run its own candidates in provincial elections. In 1942, the Alberta CCF clubs formally merged with the Labour Party and Elmer Roper became the new leader after becoming the party's first Alberta MLA as a result of an upset victory in a 1942 by-election.[3] In the next two years party membership soared from 2,500 to over 12,000.[1]

In the 1944 election, the CCF received 24% of the vote, but was able to win only 2 seats, due to the single transferable vote system and the dominance of Social Credit which received over 50% of ballots cast. Roper was joined in the legislature by Aylmer Liesemer, a Calgary schoolteacher.[1] The rise of support for the CCF after 1942 mobilized the business community to pull out of efforts to build an anti-Social Credit party and instead back the Social Credit government, now led by Ernest Manning, as a bulwark against the socialists.[1] Unlike the Saskatchewan CCF, which had won office in the 1944 Saskatchewan election on a platform calling for social programs, the Alberta CCF was more radical campaigned on provincial ownership of the province's resources and utilities. Irvine also advocated an alliance with the communist Labour-Progressive Party under Alberta's single transferable vote electoral system.[1]

Through the 1940s and 1950s, the CCF's percentage of the vote declined, eventually falling under 10% of the vote, and they were never able to win more than the two seats they managed in 1944. The party was kept to two MLAs through the 1950s. Roper lost his seat in the 1955 election and the party's two MLAs were both defeated in the 1959 election leaving it shut out of the legislature.

The CCF merged with the Canadian Labour Congress in 1961, becoming the New Democratic Party of Canada. In Alberta, the NDP was founded in 1962 under the leadership of Neil Reimer who had been national director of the Energy and Chemical Workers Union. The NDP was unable to build on the CCF's provincial base, and, with the exception of a 1966 by-election victory, did not win any seats until the 1971 election when Grant Notley, who had taken over the party in 1968, was elected to the legislature.

With the election of the Alberta Progressive Conservatives in 1971, Social Credit gradually collapsed. The Alberta Liberal Party suffered in the late 1970s and early 1980s due to its shared name and links with the federal Liberal Party of Canada government of Prime Minister Pierre Trudeau, which was very unpopular in Alberta.

The decline of Social Credit and unpopularity of the Liberals gave the New Democrats an opportunity to become the focus of opposition to the Lougheed-led Conservatives. Popularity of the NDP gradually increased under leader Grant Notley, who led the party from 1968 until his death in a plane crash in 1984, and was the party's sole MLA until 1982.

Notley was leading the NDP to what many thought would be a major breakthrough when he was killed in an airplane crash in 1984.

The New Democrats were unable to gain additional seats in the 1989 election. While they were still the Official Opposition in the legislature by virtue of having more seats than the Liberals, the NDs' popular support fell behind the Liberals (26% to the Liberal's 28%) for the first time in decades.

In the 1993 election, their popular vote fell by more than half to 11%, and they lost all their seats in the legislature.

The party was able to regain their foothold in the legislature winning two seats in the 1997 and 2001 elections. 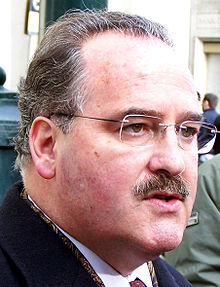 In 2004, the party reverted to the traditional "NDP" abbreviation. The current leader of the Alberta NDP is Brian Mason, a former city councillor. He was elected leader in September 2004, while serving as interim leader after the resignation of Raj Pannu. Mason represents the riding of Edmonton Highlands-Norwood.

In the 2004 Alberta general election the party doubled its seats from two to four - the re-elected Mason and Pannu, returning former leader Ray Martin, and newcomer David Eggen. The party received 10.2% of the vote province-wide.

In the 2008 Alberta general election, the party was reduced to two seats. Brian Mason was re-elected as was newcomer Rachael Notley. Ray Martin and David Eggen were narrowly defeated. The party received 8.52% of the popular vote.

At its 2008 provincial convention, the party overwhelmingly rejected a proposal by the Environment Caucus recommending a party task force be mandated to “investigate a variety of options for political cooperation with the Alberta Liberals and/or Greens.” and “to prepare a motion to be considered” at the next Party Convention. [4] The proposal was opposed by NDP leader Brian Mason.[5]

Alberta Federation of Labour president Gil McGowan had, independently from the Environment Caucus, distributed a detailed discussion paper advocating that the NDP form a one or two election cooperation pact with the Alberta Liberal Party and Green Party of Alberta in which parties would not run against each other in certain ridings in hopes of defeating Progressive Conservative candidates. The Way Forward: An AFL proposal for a united alternative to the Conservatives

McGowan was unable to speak to the NDEnvirocaucus motion on cooperation before the question was "called". However, just after the resolution was soundly defeated, and during his report to the Convention as AFL President, he addressed the issue. He urged Party members to admit, in the face of 40 years of Tory government and the recent disappointing election results, that there is a problem and that significant change is called for.

‹ The template below (Alberta provincial political parties) is being considered for merging. See templates for discussion to help reach a consensus. ›
Categories: