Decision to establish Belarusian State University, as a first national university of Belarus, was made on 25 February 1919 by the government of the Byelorussian SSR. However, Minsk was occupied by the Polish army at the time, and the university was actually established in 1921 in Minsk.

Vladimr Picheta, historian and Slavonic languages expert, became first rector of the BSU. The university staff was formed by professors and lecturers transferred from universities of Moscow, Kazan and Kiev. Faculty consisted of 14 professors, 49 lecturers and 10 teaching assistants. First graduates left the BSU in 1925.

Initially there have been three Faculties - Workers, Medicine and Humanities with 1,390 students among them. In 1922 a new Pedagogical Faculty was established. In October 1927 post-graduate degrees became available.

During the 1930s the university became not only the key center for education and research in Soviet-controlled Belarus, but also led to branching out of specialized educational institutions and to the establishment of Belarusian Academy of Sciences.

By 1941, just before the 20th anniversary of the university, there have been 6 Faculties: [Chemistry], [Physics] and [Mathematics], [Biology], [History], [Geography] and Languages. There have been 50 professors, 41 docents and 90 assistants (junior lecturers). There was also a Workers Faculty (providing part-time education to full-time employees of factories and plants) and special part-time Polish- and Yiddish-language sections.

In June 1941 Minsk was occupied by Nazi Germany; some students and academic staff were evacuated to the east, some joined the Soviet Army or partisan brigades. Some of university buildings were destroyed, some were used by the Germans as hospitals and offices.

In May 1943 Belarusian State University was re-established at Skhodnya, a suburban settlement to the north-east of Moscow. Some of former students and academics joined the re-established university. Its libraries were newly formed through donations from universities and colleges of Moscow.

In August 1944 first group of students and academic staff returned to Minsk, and regular classes re-started in autumn 1944. By September 1945 there have been over 300 students in the re-established university in Minsk. However, pre-war buildings and research facilities were not restored until late 1950. By then, there have been 7 Faculties, 35 professors, and 170 other academics at the BSU.

During the 1950s-1980s the university significantly evolved: new Faculties have been established, new buildings have been built, new research facilities have been added. Numbers of academic staff and students increased dramatically. In the former USSR Belarusian State University became one of key research and educational establishments and received several government awards for excellency.[citation needed]

Since Belarus independence (1991) the BSU continues to be the major university of the country. In the early 1990s it was a center of Belarusian national revival, with many lecturers (and even entire Faculties) choosing to switch from Russian to Belarusian as main language of teaching and research.[citation needed]

Institute of Journalistics, Faculty of Philosophy and Social Science 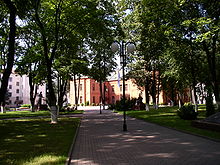 Internal Yard of the BSU campus

The BSU is an integral complex of academic, research, production, social and cultural, administrative, auxiliary and other units. There are 16 Faculties within the university structure.

BSU has 4 Educational Institutes that provide training on undergraduate and post-graduate levels of education.

There are a number of Institutes that conduct retraining and advanced training of both youths and adults.

Centers of sharing use of unique research equipment

The research activity is conducted on the basis of 25 Research Centres and 115 Scientific Laboratories. University has 4 Research Institutes in its structure:

The BSU complex also includes 12 unitary scientific-productional enterprises, among them are the following:

The core of the BSU is made of the academic community of teachers, researches, students and post- graduate students. Today at the BSU near 7400 employees carry out their duties and 2500 of them occupy full-time teaching positions within university's major faculties and institutes. The quality of education is allegedly assured by a high qualification of the BSU teaching staff, among them 6 academicians, 7 Corresponding Members of the National Academy of Sciences of Belarus, 291 Doctors of Science and 1350 PhD degree holders. In total more than 10,7% of teaching staff are professors, and holders of Doctor of Science degree. There are 618 research workers involved in caring out academic research, experimental and design work, innovative and production activities to solve most actual problems of science, technologies and industrial production.[citation needed]

The Belarusian State University is accessible for all who wish to enrich their knowledge. The BSU student's community consists of near 29000 undergraduate and graduate students, 663 post-graduate (doctoral) and 11 post-doctoral students. Full-time students, who successfully pass exams, receive scholarships and study free of charge.

The University annual enrollment exceeds 5000 students. In 2009 approximately 60% of the secondary school graduates from the country’s regions were accepted for the full-time budget form of education. Vitebsk region — 10%, Mogilev region — 7,3%, Gomel region – 6,4%, Grodno region 9,9%, Brest region — 9,6%, Minsk — 16,4%. In 2009 university accepted 813 international students. Today more than 1700 international students from 53 countries of world are pursuing their education at the BSU.

One of significant evidence of a high quality education student obtain at the University is their successes in national and international scientific competitions and contests. 104 BSU students gained prize places at the Olympiads and competitions in 2007-2009, among them 49 in 2009. On the XVI International Students Mathematics Olympiad (Hungary, July 2009) the BSU team gained 3 gold and 3 silver medals. Bronze medal was gained by the BSU student on the III International Astronomy and Astrophysics Olympiad. On the VI International Economic and Financial Disciplines and Management Aspects Olympiad gained 1st and 2nd place. The International Olympiad for Informatics and Programming (November, 2009, Russia) BSU students managed to get a I degree Diploma. On the selection tours of the World Programming Championship BSU team always reaches the finals and gets into the top-20 teams of world.[citation needed]

It worth to be mentioned that 80% of research workers in the National Academy of Sciences of Belarus are the BSU graduates.[citation needed]

The Higher Education Program is organised at the BSU major Faculties and Educational Institutes through 56 specialities and more than 250 specialisations and aimed at preparing specialist with fundamental and special knowledge and skills. For the last two years several new specialties were created in order to comply with existing demands of national economy. These are Nuclear Physics, Logistics, Management of innovations, Contemporary Foreign Languages and many others. The duration of studies is 4-5 academic years. Classes last from 1 September - until 30 June. Upon successful completion of the programmes students are awarded the Diploma of Higher Education which is considered as superior to the bachelor's degree and gives the rights to pursue further education at the post-graduate level. Language of studies is Russian or Belarusian.

Training along the Magister’s Degree Program is conducted through 48 specialities. The program's goal is to form comprehensive knowledge and special skills for scientific, pedagogical and research activity. Duration of studies 1-2 academic years. But in some cases there is a possibility for international students to study according to the individual curriculum without a fixed dates of studies. Upon successful completion and thesis defense students receive Diploma of Magister.

The PhD Program is aimed to prepare highly qualified researchers holding a candidate of science degree (equivalent of PhD). Training is provided through 142 specialities of different branches of science. Duration of studies is 3-4 academic years. Classes last from 1 November until 31 October. International students have the opportunity to study according to the individual curriculum without a fixed dates enrollment. Upon successful completion graduates receive a Certificate on Graduation and in case if dissertation was presented and defended the student confers the Candidate if Science degree. The BSU has 22 Scientific Councils which conduct evaluations of theses presented for defence.

In order to train international students in Russian language and learning strategies and skills that would enable them to study professional disciplines and to be admitted to a degree programmes the BSU provides pre-university education programme. The program comprises studying the Russian language, literature, and subjects on future specialty. Teaching is organised along five profiles: the humanities, economics, natural sciences, technical disciplines, medicine and biology. The period of study is approximately ten months (one academic year). Upon successful completion Students receive a Graduation Certificate. This document is an official confirmation of student’s eligibility to continue studies at the BSU and other higher educational establishments in the Republic of Belarus and CIS countries.

As a part of the system of training highly qualified staff holding scientific degrees within the University there are 22 Scientific Councils which conduct evaluations of scientific papers presented for defence.

International students of the BSU

Academic exchanges, common research and joint educational programmes are carried out in the framework of more than 200 international agreements with Institutions from Europe, Asia and America.

The BSU is the biggest international cooperation center in field of education and science in the country. A number of centers work under the university, among them:

Each of the University study building is equipped with well-furnished classrooms, seminar rooms and reading lounges. There are 70 computer laboratory and 4 media classrooms.

Information Resources of the University Network include web-server, web-servers of the faculties and subdivisions of the BSU and Intranet-Server of BSU. Students are thought on the basis of with the best methods and the latest technologies of knowledge acquisition with use of distant training technologies, such as eUniversity, Moodle and eLearning systems. Computer-Aided Network Information System «University» enables effective administrative procedures for staff and students through electronic registration and issue of the personal documents. The BSU Lyceum uses the distant training system for publishing electronic training materials in the Internet. International students who study Russian as a Foreign Language at the Faculty of Pre-University Education are able to use a specially designed electronic software “Study Russian”.

In February 2010 Supercomputer SKIF was mounted in the BSU. It allows to accomplish tasks simultaneously on the 288 processors. Besides it is one of the centers of the national scientific and educational GRID-network. Access to the Supercomputer resources within the university network is granted to the faculty members, scientific collaborators, undergraduates, Master and doctoral students.

The BSU Fundamental Library‘s funds consist of above 2 million volumes of Belarusian, Russian and other languages’ literature. The Library has 820 readers’ places, 150 workers, 9 home loan departments, 17 departmental and specialised reading rooms, above 26,000 registered users, and provides 1,851,000 book loans annually. The annual library acquisitions is about 50,000 new editions. Annually it subscribes to above 1,070 titles of Belarusian and foreign periodicals, conducts international book exchange with 136 research and educational institutions located in 24 countries of the world. The following digital recourses are available for students and faculty members:

About 65% of housing provided by university comprise rooms shared by 3-4 persons with a common kitchen and sanitary arrangements. There are also dorms of block type with kitchen and toilets common for two rooms. Set of furniture includes a bed, a chair, a desk, built-in wardrobe, book shelves. Pricing depends on the type of accommodation and varies from $20 – to $ 40 per month. 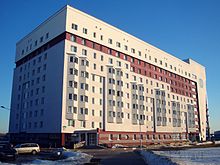 The BSU has created necessary sport and recreation facilities for its students and staff. Training and health-improving complexes, swimming pools, gymnasiums, sport grounds are available. Over 1300 students attend 24 specialised sports sections on a regular basis. About 50 of them are members of National teams participating in Olympic games, World and European Championships. The University annually holds students contests in 21 kinds of sport (arm-wrestling, weight-lifting, power-lifting, basketball, volleyball, mini-football, Greek-Roman wrestling, judo, table tennis, skis, swimming, chess, orienteering, sport aerobics, cross-country race, karate, track and field athletics). The BSU students are often prize-winners in the Republican Students’ Olympiad and other contests. University holds more than 90 sport events annually. There is a specialised unit - the Department for Physical Training which is aimed at studying the relevant issues and designing strategy in health development of the young people.