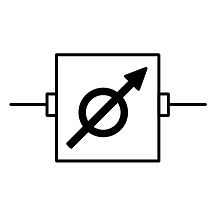 Attenuators are commonly used in fiber optic communications, either to test power level margins by temporarily adding a calibrated amount of signal loss, or installed permanently to properly match transmitter and receiver levels.

Sharp bends stress optic fibers and can cause losses. If a received signal is too strong a temporary fix is to wrap the cable around a pencil until the desired level of attenuation is achieved.[1] However, such arrangements are unreliable, since the stressed fiber tends to break over time.

Fixed optical attenuators used in fiber optic systems may use a variety of principles for their functioning. Preferred attenuators use either doped fibers, or mis-aligned splices, since both of these are reliable and inexpensive. Inline style attenuators are incorporated into patch cables. The alternative build out style attenuator is a small male-female adapter that can be added on to other cables.[2]

Non-preferred attenuators often use gap loss or reflective principles. Such devices can be sensitive to: modal distribution, wavelength, contamination, vibration, temperature, damage due to power bursts, may cause back reflections, may cause signal dispersion etc.

Built-in variable optical attenuators may be either manually or electrically controlled.

A manual device is useful for one-time set up of a system, and is a near-equivalent to a fixed attenuator, and may be referred to as an "adjustable attenuator". In contrast, an electrically controlled attenuator can provide adaptive power optimization.

Attributes of merit for electrically controlled devices, include speed of response and avoiding degradation of the transmitted signal. Dynamic range is usually quite restricted, and power feedback may mean that long term stability is a relatively minor issue. Speed of response is a particularly major issue in dynamically reconfigurable systems, where a delay of one millionth of a second can result in the loss of large amounts of transmitted data. Typical technologies employed for high speed response include LCD, or Lithium niobate devices.

There is a class of built-in attenuators that is technically indistinguishable from test attenuators, except they are packaged for rack mounting, and have no test display.

Variable Fiber Optic Test Attenuators generally use a variable neutral density filter. Despite relatively high cost, this arrangement has the advantages of being stable, wavelength insensitive, mode insensitive, and offering a large dynamic range. Other schemes such as LCD, variable air gap etc. have been tried over the years, but with limited success.

They may be either manually or motor controlled. Motor control give regular users a distinct productivity advantage, since commonly used test sequences can be run automatically.

Test sequences that use variable attenuators, can be very time consuming. Therefore, automation is likely to achieve useful benefits. Both bench and handheld style devices are available that offer such features.