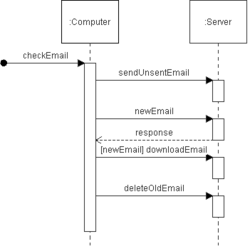 A Message Sequence Chart (or MSC) is an interaction diagram from the SDL family very similar to UML's sequence diagram, standardized by the International Telecommunication Union.

The main area of application for Message Sequence Charts is as for communication behaviour in real-time systems, more specifically telecommunication Electronic Switching Systems.

The first version of the MSC standard was released in 1992[1].

The latest MSC 2000 version[3] added object orientation, refined the use of data and time in diagrams, and added the concept of remote method calls[4].

It has been said that MSC has been considered as a candidate for the interaction diagrams in UML[5].

However, proponents of MSC such as Ericsson think that MSC is better than UML 2.0 for modelling large or complex systems[6].

David Harel thinks that MSC still has several shortcomings such as:

To address what he sees as weaknesses in the MSC model, David Harel proposed an extension on the MSC standard called LSC (Live Sequence Charts)[7][8][9].