Nokia Nseries is a multimedia smartphone product family which is engineered and marketed by the Nokia Corporation.

The Nseries devices are known to commonly support multiple high-speed wireless technologies, such as 3G, or Wireless LAN.

The Nokia Nseries is aimed at users looking to pack as many features as possible into one device. The better-than-average cameras often found on Nseries devices (with many using the higher-quality Carl Zeiss optics) are one such example, as are the video and music playback and photo viewing capabilities of these devices, which resemble those of standalone portable media devices. In all recently launched devices GPS, MP3 player and WLAN functionality also have been present.

The numbers describe the traits of the phone: 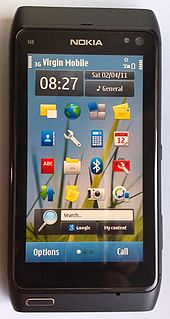 The Nokia N8 smartphone is the worlds first Symbian^3 device, and the first camera phone to ever feature a 12 megapixel autofocus lens.

Nokia stated that Maemo would be developed alongside Symbian.

Maemo has since (Maemo "6" and beyond) merged with Intel's Moblin, and become MeeGo, which will continue to be developed for mobile devices.

The Nokia N8 is the first device to function on the Symbian^3 mobile operating system.

Nokia revealed that the N8 will be the last device in its flagship N-series devices to ship with Symbian OS.[2][3]

Instead, Nokia will use Microsoft Windows Phone 7 for its high-end flagship devices, and revealed the Nokia N9 will function on the MeeGo mobile operating system.

In June at the Nokia Connections in Singapore Nokia launched the new N9 with Meego 1.2 Harmattan OS which the company calls Qt device as the whole app and UI framework is written in Qt. Its also the world's first pure touch phone with no buttons for home screen and a great new swipe UI. many pundits in telecom industry are hailing it and have been impressed with the UI and great Industrial design and given favourable reviews. The device is expected to be sold in selected regions in Q3 2011