The station was originally built with just one platform. The station offices were on the platform and a goods shed was opposite, while an engine shed was provided behind the platform. In 1905 a second track was added on the opposite side of the platform and a new signal box was brought into use. An iron hut was added to provide more accommodation but was removed in the 1920s when the main building was extended towards the town. The next major alterations came in 1934 when the original single track line was replaced by a double line to cope with the heavy holiday traffic, and a new signal box built. The platforms were extended at the same time. They were now 1,250 feet (380 m) long and a 200 feet (61 m) canopy was provided to give extra shelter at the town end.[2] 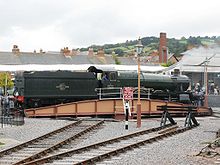 Bradley Manor on the new turntable

The engine shed was closed in 1956, goods traffic ceased in 1964, and the signal box became redundant on 27 March 1966. The railway was closed on 4 January 1971 but was reopened on 28 March 1976 as a heritage railway by a new West Somerset Railway. The goods shed was converted into an engine shed (and was extended in 1999), and a water tower brought from Pwllheli railway station (but was sold to the Welshpool and Llanfair Railway in 1999). Meanwhile the station building was altered to be used as offices and a new ticket office provided. A new level crossing has been laid across the line a little beyond the platform end to carry a new relief road to the sea front, and the former Watchet signal box was moved to control trains at Minehead. A new carriage workshop was opened in 1991 near the Dunster end of the station,[2] and a new turntable brought into use in 2008.[3]

The station serves as the headquarters of the West Somerset Railway and the. The Operating, Mechanical Engineering, Civil Engineering , Signal & Telegraph , and Administration departments are based here.[4] 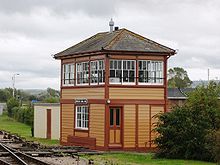 The station is on the sea front and close to the town centre. A wide, single platform has tracks on both sides. The main track on the seaward side is platform 1, while platform 2 stops short of the stone-built station buildings. The old goods shed is opposite the station building and is now used as a locomotive workshop, and a newer carriage workshop is close by. Opposite platform 2 is the turntable, overlooked by a cafe operated by the railway. The buildings on the platform include a booking office and a shop selling souvenirs.

The signal box is at the far end of the platform near the level crossing. Sidings on both sides of the station are used to hold stock, both operating vehicles and others awaiting repairs in the workshops.[5]

The station is a Grade II listed building.[6] 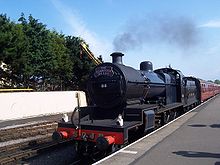 Trains run between Minehead and Bishops Lydeard at weekends and on some other days from March to October, daily during the late spring and summer, and on certain days during the winter.[7]