Norton Fitzwarren railway station is an untimetabled station on the West Somerset Railway in Somerset, England. It was built in 2009 about 0.25 miles (0.4 km) north of the site of the old (Norton Fitzwarren) station that served the village of Norton Fitzwarren from 1873 until 1961. There have been fatal railway accidents in the vicinity in 1890, 1940 and 1978.

The Bristol and Exeter Railway (B&ER) was opened through Norton Fitzwarren on 1 May 1843 but the nearest station was 2 miles (3 km) east at Taunton. On 31 March 1862 the original West Somerset Railway was opened to Watchet. It left the Exeter line here at Norton Junction, but still no station was provided. A further branch opened on 8 June 1871, making a connection into the West Somerset line just west of the junction with the Exeter line. This was the first section of the Devon and Somerset Railway to Wiveliscombe.[1] A two-platform station was finally opened at the junction on 1 June 1873, located immediately east of the junction (at 51°01′24″N 3°08′57″W﻿ / ﻿51.0233°N 3.1493°W﻿ / 51.0233; -3.1493). A small station building was situated on the northern platform, the side of the railway closest to the village. A goods yard was situated on this side of the line to the east of the station, and a hotel was built to the west close to the junction.[2] 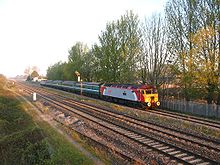 Both the branch lines were operated by the B&ER until 1 January 1876 when it was amalgamated with the Great Western Railway.[1] In 1931 work was started to add two additional tracks for about 7 miles (11 km) from Norton Fitzwarren through Taunton to Cogload Junction. These tracks ran around the outside of the two platforms and new buildings were provided north of the new up relief line and therefore away from the platforms, being brought into use on 2 December 1931.[2]

On 1 January 1948 the railways were nationalised and Norton Fitzwarren became a part of the Western Region of British Railways. Passenger traffic was withdrawn on 30 October 1961, after which passengers for the two branches had to once again change trains at Taunton until these routes were closed on 3 October 1966 (the Devon and Somerset line) and 4 January 1971 (West Somerset line).[2] The goods yard continued to operate until 6 July 1964. This had always handled a large volume of locally grown apples, and on 1 March 1983 a private siding was opened into the Taunton Cider Company’s factory on the old goods yard site.[3] Although this factory has since closed,[2] it was this private siding that allowed the West Somerset Railway, in its new heritage railway guise, to be connected to the national railway network.[4]

Three significant accidents have happened on the main line in the vicinity of Norton Fitzwarren:

In 2004 the West Somerset Railway Association (WSRA) (the volunteer organisation that supports the WSR) purchased 33 acres (13 ha) of land west of its railway and north of the main line at Norton Fitzwarren.

This included a short length of the track bed of the dismantled Barnstaple branch line. This track bed and a new north-west chord have eventually formed a triangle where rolling stock is turned when required.[8] Part of the land is used for ballast reclamation, with waste material being delivered to the site by Network Rail in conjunction with their track renewals depot at nearby Fairwater Yard.[9]

There is sufficient space to also allow for the construction of a locomotive and rolling stock restoration depot in the future.[8]

The WSRA built a single concrete platform on the west side of the Minehead to Taunton line in 2009. This is not shown in the regular timetable but is for use during special events when a shuttle service can bring people from Bishops Lydeard. It is long enough to handle four-coach trains.[10] It was first used on 1 and 2 August 2009 in association with a vintage vehicle rally on the WSR’s land at Norton Fitzwarren.[11]