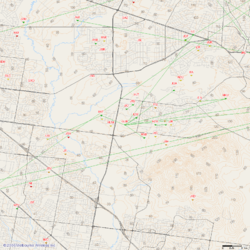 The Melbourne Wireless Network in Rowville.

This metropolitan area network is detailed well on the organisation's website, which features dynamic mapping systems to show the current development of the network, and a wiki is used for collaboration on technical documents.[2]

Melbourne Wireless made significant contributions on the regulation and future of wireless broadband technologies, as well as the legality of community wireless networks within Australia during 2002.[3][4]

During 2010 and 2011 Melbourne Wireless have undertaken a backbone routing and equipment upgrade programme. This has involved identifying new and potential sites for the placement of dedicated backbone routing equipment. From an equipment perspective this primarily involves replacing radio equipment which operates on the now congested 2.4GHz frequency range with more advanced radio equipment which operates on the less cluttered 5.8GHz frequency band. A further advantage of using equipment in the 5.8GHz frequency band is data speeds or throughout. 5.8GHz equipment provides for much higher speeds.

Much of this project is completed with work remaining to install additional node sites between Melbourne and the Geelong and Ballarat regions.

Melbourne Wireless resources and expertise has assisted in the design, development and installation[5] of the Bunbury Street Railcam Project a platform to digitally record all train movements through the Bunbury Street Railway Tunnel which forms part of the South Kensington and West Footscray Railway Line. The project was completed and fully operational by June 2011[6]. The project is connected to the Melbourne Wireless network by way of a radio communications link which is operating in the 5.8GHz frequency range.

The radio link allows users connected to the Melbourne Wireless IP Network to watch the IP Cameras live. Internet users can access a video portal[7] which provides an image which is refreshed every 60 seconds and pushed out to the user. 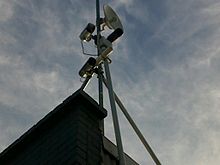 Four current Melbourne Wireless Committee Members and one regular member of the club were involved with project. Peter Buncle, Rob Britt, Mark Detering, Brian Evans and Tim Hogard. This project is the first of its type to use Melbourne Wireless as a means of gaining high-speed IP Network access to a media recording and archive site on the network.

Given the success of the project, planning has commenced to use further railcam projects undertaken by the Railpage and Melbourne Wireless teams as a catalyst to further expand the Melbourne Wireless network. Melbourne Wireless is jointly exploring the possibility to connecting further sites in the Geelong region to accomdate railcams west of Geelong.