The large bird genus Columba comprises a group of medium to large stout-bodied pigeons, often referred to as the typical pigeons. The terms "dove" and "pigeon" are used indiscriminately for smaller and larger Columbidae, respectively. Columba species – at least those of Columba sensu stricto – are generally termed "pigeons", and in many cases wood-pigeons. The species commonly referred to just as "the pigeon" is the Feral Pigeon (C. livia domestica). It is derived from the Rock Pigeon (C. livia), which also has given rise to the majority of domesticated pigeon breeds, such as the racing pigeon. Meanwhile, "wood pigeon" by itself usually means the Common Wood-pigeon (C. palumbus).

This genus as understood today is native to the Old World, but some – notably the domestic and feral Rock Pigeon – have been introduced outside their natural range, for example in the Americas.

The term columba comes from the Latin columba, "a dove",[1] the feminine form of columbus, "a male dove",[2] itself the latinisation of the Greek κόλυμβος (kolumbos), "diver",[3] which derives from the verb κολυμβάω (kolumbaō), "to dive, plunge headlong, swim".[4] The feminine form of kolumbos, κολυμβίς (kolumbis), "diver",[5] was the name applied by Aristophanes and others to the common rock pigeons of Greece, because of the "swimming" motion made by their wings when flying.[6]

The American pigeons formerly in Columba are now split off as a separate genus Patagioenas again. That the American radiation constitutes a distinct lineage is borne out by molecular evidence; in fact, the Patagioenas "pigeons" are basal to the split between the Columba "pigeons" and the Streptopelia "doves". The typical pigeons together with Streptopelia and the minor Nesoenas and Stigmatopelia lineages constitute the dominant evolutionary radiation of Columbidae in temperate Eurasia, though they also occur in tropical regions. The taxonomic status of some African pigeons presently placed here is in need of further study; they are smaller than the usual Columba (and hence often called "doves"), and differ in some other aspects. They might be separable as genus Aplopelia. That nonwithstanding, the ineage of the typical pigeons probably diverged from its closest relatives in the Late Miocene, perhaps some 7-8 million years ago (Ma).[7] 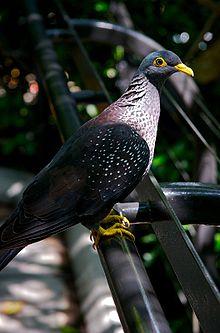 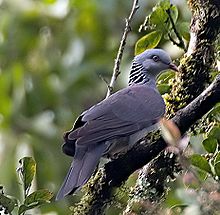 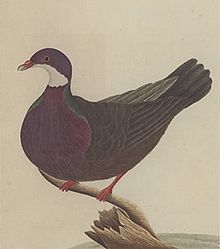 The extinct Lord Howe Pigeon (C. vitiensis godmanae) is known only from some travellers' reports

Species remaining in Columba are:

A fossil species, C. omnisanctorum, was described from the Early Pliocene (5.3-3.6 Ma) of the Gargano Peninsula and surroundings, Italy. A supposed "falcon" fossil from nearby contemporary and Middle Pliocene (3.6-2.6 Ma) sites may either be of the same species or another pigeon; the name Columba pisana would apply for it or (if conspecific) for both. C. melitensis is a fossil pigeon from the Late Pleistocene of Malta. Only known from a coracoid described by Richard Lydekker in 1891, whether it is indeed distinct from the living species and not just a paleosubspecies needs to be studied, given its late age. Indeterminate remains of a Columba were also found in Late Pliocene/Early Pleistocene (ELMMZ MN 17) deposits at Varshets (Bulgaria) and Šandalja (Croatia).[8]

Another prehistoric pigeon, C. congi, was described from Early Pleistocene remains found in the famous Zhoukoudian caves in China. This, too, needs to be studied regarding whether it is not just an ancestral population of a still-living species.