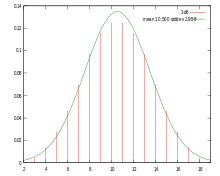 Probability mass function of a roll of 3d6 and probability density function of the normal distribution with the same mean and standard deviation.

In most role-playing games, die rolls required by the system are given in the form AdX. A and X are variables, separated by the letter "d", which stands for die or dice. The letter "d" is most commonly lower-case, but some notation uses upper-case "D"[1] (non-english texts can use the equivalent form of the first letter of the given language's word for "dice", but also often use the English "d").

If the final number is omitted, it is typically assumed to be a six, but in some contexts, other defaults are used.

3d6 would mean, "roll three six-sided dice." Commonly, these dice are added together, but some systems could direct the player use them in some other way, such as choosing the best die rolled.

To this basic notation, an additive modifier can be appended, yielding expressions of the form, AdX+B. The plus is sometimes replaced by a minus sign ("−") to indicate subtraction. B is a number to be added to the sum of the rolls. So, 1d20-10 would indicate a roll of a single 20-sided die with 10 being subtracted from the result. These expressions can also be chained (e.g. 2d6+1d8), though this usage is less common. Additionally, notation such as AdX-L is not uncommon, the "L" (or "H", less commonly) being used to represent "the lowest result" (or "the highest result"). For instance, 4d6-L means a roll of 4 six-sided dice, dropping the lowest result. This application skews the bell curve of probability towards the higher numbers, as a result of 3 can only occur when all four dice come up 1 (probability 1/1296), while a roll of 18 results if any three dice are 6 (probability 21/1296 = 7/432).

Rolling three or more dice gives a probability distribution that is approximately Gaussian, in accordance with the central limit theorem.

In some games, the above notation is expanded to allow for a multiplier, as in AdX×C or C×dX, where:

Often, the variable X in the above notation will be 100, alternatively written "%". Although a 100-sided die does exist, it is both more common and more uniformly random to use a combination of two ten-sided dice known as "percentile dice", where the "10" is replaced with a "0"; one die represents units and the other (typically distinguished by color) tens. Depending on the game, a roll of two zeroes can mean 100 or zero.

The d1000 (using three 10-sided dice) is occasionally also seen, although it is more common in wargames than role-playing games.

A number of notational strategies exist for discarding only certain types of results.

Some games extend the standard notation to AdX(kY)+B where, in addition to the above, Y is the number of dice kept from the roll. Whether the dice omitted are the highest, lowest, or the player's choice depends on the game in question. 7th Sea only uses 10-sided dice, and uses notation of the form 8k6, meaning "Roll eight ten-sided dice, keep the highest six, and sum them."

An alternative notation used by the OpenRoleplaying.org die roller allows the use of a plus or minus followed by L or H instead of the modifier B, to denote dropping or re-adding the lowest or highest roll on a single die, respectively.[2]

Blood Bowl, also a Games Workshop product, introduces the block die with special notation Xdb or roll block dice X times, blocker/defender chooses (if more than 1 die) with X being one of 3, 2, 1 (usually omitted), -2, -3. Alternatively words for & against can be used to describe a Xdb (in this case X > 0). As an example 2db against is equal to -2db which are both short ways of saying 2 dice block, defender chooses from the results rolled.

The FUDGE role-playing system uses a die marked with minus signs, plus signs and blank sides, meaning -1, +1 and 0 respectively. The default is one third of each, usually represented by a six-sided die with two of each, known as dF.2 or just dF. Four of these (4dF) are rolled to determine results from -4 to +4, which is equivalent to 4d3-8.Variants include dF.1, which is a six-sided die with four blanks, one plus and one minus.

The Cyborg Commando role-playing game by Gary Gygax uses a dice mechanic called d10x. This is equivalent to d10×d10 and gives a non-linear distribution, with most results concentrated at the lower end of the range.

The 7th Sea and Legend of the Five Rings role-playing games by Alderac Entertainment Group uses a system called Roll and Keep. The notation is given as XkY, where X stands for the number of dice to roll, adding the values of Y dice you keep and comparing that to the TN (target number). This is coupled with exploding dice, a system where any die coming up 10 (normally) is rerolled, adding 10 to the result. Dice can "explode" indefinitely, making for extremely large rolls; for instance, if the same die comes up 10 three times in a row and then comes up 7, it counts as one die coming up 37.

The Talarius Gaming System by Fantasy Makers Industries uses a system of open-ended, indefinite d100 (d%) roll, where one degree of success (or "one success") is accounted for every 10 points below a specified score or number. This is expanded with the open-ended roll, where any time the roll comes up within the 01–05 range, a reroll is allowed for additional successes. The open-ended roll will continue forever if a player were to continue rolling 01-05, gaining an extreme number of successes.