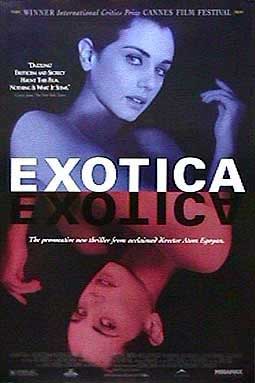 "Exotica" is a Canadian set primarily in and around the Exotica in Toronto, . It was written and directed by .

:Note: The story of "Exotica" is not told in chronological order and important information is often revealed only late in the film. The following synopsis does not reflect the viewer's actual experience of the events as they unfold.

"Exotica" presents a disparate group of characters whose lives are interconnected through the Exotica nightclub. Christina () is an at Exotica, owned by Zoe (). Eric () is the club's , and Christina's former boyfriend. Francis () is a customer who comes in nightly and always has Christina - dressed in a schoolgirl uniform - give him a private dance, which seems to inspire Eric's jealousy.

In his professional life, Francis is a tax for , and Thomas () is a pet store owner whose books of account Francis is auditing pursuant to a suspicion of Thomas running an illegal import business with revenues of $200,000 per year.

Francis is eventually banned from the club when Eric manipulates him into touching Christina during one of her dances (which is against the rules of the club). Around the same time, Francis discovers illegal activities in Thomas' financial records, and forces Thomas to get involved in his conflict with Eric - and we eventually learn that Francis' obsession with Christina has much more complex roots than it first appears. The film's final scene, set many years before the others, also drastically reconfigures the viewer's understanding of the characters, especially Christina.

*At the 1994 , "Exotica" was nominated for the , and won the Prize.
* was nominated for Best Supporting Actor at the 1996 Chlotrudis Awards for independent film.
*"Exotica" won Best Foreign Film from the in 1995.
*At the 1994 s for Canadian cinema, "Exotica" won Best Motion Picture, as well as awards for the best screenplay, direction, music, costume design, cinematography and production design. Don McKellar won the award for Best Actor in a Supporting Role.
*"Exotica" was named Best Canadian Feature Film at the .
*To judge from his own account, Egoyan was quite amused by an unlikely award that this film won: the award for Best Alternative Adult Film of 1996.