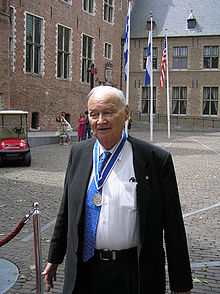 Maurice F. Strong, PC, CC, OM, FRSC (born April 29, 1929 in Oak Lake, Manitoba) is a Canadian entrepreneur and a former under-secretary general of the United Nations.[1] Strong's first name is pronounced "Mor'ris" with the accent on the first syllable.[2]

Strong had his start as an entrepreneur in the Alberta oil patch and was president of Power Corporation of Canada until 1966. In the early 1970s he was Secretary General of the United Nations Conference on the Human Environment and then became the first Executive Director of the United Nations Environment Programme. He returned to Canada to become Chief Executive Officer of Petro-Canada from 1976 to 1978. He headed Ontario Hydro, one of North America's largest power utilities, was national President and Chairman of the Extension Committee of the World Alliance of YMCAs, and headed American Water Development Incorporated. He served as a commissioner of the World Commission on Environment and Development in 1986.[3] and is recognised by the International Union for Conservation of Nature as a leader in the international environmental movement.[4]

He was President of the Council of the United Nations's University for Peace from 1998 to 2006. UPEACE is the only university in the UN system able to grant degrees at the masters and doctoral level. Today Strong is an active honorary professor at Peking University and Honorary Chairman of its Environmental Foundation. He is Chairman of the Advisory Board for the Institute for Research on Security and Sustainability for Northeast Asia.[5]

Maurice Strong was a child of the Great Depression, enduring serious poverty; his father was laid off at the beginning of the depression era and thereafter supported his family on odd jobs; his mother, overcome by struggle, succombed to mental illness and died in a mental hospital. He was born in Oak Lake, Manitoba a small town on the Canadian prairie on the mainline of the Canadian Pacific.[6]

In 1948, when he was nineteen Strong was hired as a trainee by a leading brokerage firm, James Richardson & Sons, Limited of Winnipeg where he took an interest in the oil business winning a transfer as an oil specialist to Richardson's office in Calgary, Alberta; there he made the acquaintance of one of the most successful leaders of the oil industry, Jack Gallagher who hired him as his assistant. At Gallagher's Dome Petroleum, Strong occupied several key roles including Vice President of Finance, leaving the firm in 1956 and setting up his own firm, M.F. Strong Management, which assisted investors in locating opportunities in the Alberta oil patch.[7]

In the 1950s he took over a small natural gas company, Ajax Petroleum, and built it into what became one of the leading companies in the industry, Norcen Resources. This attracted the attention of one of Canada’s principal investment corporations with extensive interests in the energy and utility businesses, Power Corporation of Canada. It appointed him initially as its Executive Vice President and then President from 1961 until 1966.

In 1976, at the request of Prime Minister Pierre Trudeau, Strong returned to Canada to head the newly created national oil company, Petro-Canada.[8] He then became Chairman of the Canada Development Investment Corporation, the holding company for some of Canada’s principal government-owned corporations.

On December 31, 1986 American Water Development Incorporated (AWDI), a corporation controlled by Strong and his associates, filed an application with the District Court for Water Division 3 in Alamosa, Colorado[9] for the right to pump underground water from the lands of the Luis Maria Baca Grant No. 4 and other lands in Saguache County, Colorado in Colorado's San Luis Valley and sell it to water districts in the Front Range Urban Corridor of Colorado. The project was opposed by neighboring water rights owners, local water conservation districts, the Colorado Department of Natural Resources, and the National Park Service who alleged the project would affect others water rights and cause significant environmental damage to nearby wetland and sand dune ecosystems by reducing the flow of surface water. After a lengthy trial, Colorado courts ruled against AWDI and required payment of the objectors' legal fees, $3.1 million.[9][10]

Strong first met with a leading UN official in 1947 who arranged for him to have a temporary low-level appointment, to serve as a junior security officer at the UN headquarters in Lake Success, New York.

In 1971, Strong commissioned a report on the state of the planet, entitled “Only One Earth: The Care and Maintenance of a Small Planet” [11] and co-authored by Barbara Ward and Rene Dubos. The report summarized the findings of 152 leading experts from 58 countries in preparation for the first UN meeting on the environment, held in Stockholm in 1972. This was the world's first "state of the environment" report.

The Stockholm Conference established the environment as part of an international development agenda. It led to the establishment by the UN General Assembly in December 1972 of the United Nations Environment Programme (UNEP), with headquarters in Nairobi, Kenya, and the election of Strong to head it. UNEP was the first UN agency to be headquartered in the third world.[12] As head of UNEP, Strong convened the first international expert group meeting on climate change.[13]

Maurice Strong was one of the commissioners of the World Commission on Environment and Development, set up as an independent body by the United Nations in 1983.

His role in leading the UN’s famine relief program in Africa was the first in a series of UN advisory assignments, including reform and his appointment as Secretary-General of the UN Conference on Environment and Development—best known as the Earth Summit held in Rio de Janeiro from 3 June to 14 June 1992.[14][15] According to Strong participants at the Rio Conference adapted sound principles but did not make a commitment to action sufficient to prevent global environmental tragedy, committing to spend less than 5% of the $125 billion he felt appropriate for environmental projects in developing nations. He was seconded in that opinion by U.N. Secretary General Boutros Boutros-Ghali who stated to the delegates, "The current level of commitment is not comparable to the size and gravity of the problems,"[16]

After the Earth Summit, Strong continued to take a leading role in implementing the results of agreements at the Earth Summit through establishment of the Earth Council, the Earth Charter movement, his Chairmanship of the World Resources Institute, Membership on the Board of the International Institute for Sustainable Development, the Stockholm Environment Institute, The Africa-America Institute, the Institute of Ecology in Indonesia, the Beijer Institute of the Royal Swedish Academy of Sciences, and others. Strong was a longtime Foundation Director of the World Economic Forum, a Senior Advisor to the President of the World Bank, a Member of the International Advisory of Toyota Motor Corporation, the Advisory Council for the Center for International Development of Harvard University, the World Business Council for Sustainable Development, the World Conservation Union (IUCN), the World Wildlife Fund, Resources for the Future, and the Eisenhower Fellowships. His public service activities were carried out on a pro bono basis made possible by his business activities, which included Chairman of the International Advisory Group of CH2M Hill, Strovest Holdings Inc., Technology Development Inc., Zenon Environmental Inc., and most recently, Cosmos International, and the China Carbon Corporation.

In 1999, at the request of then UN Secretary-General, Javier Pérez de Cuéllar, he took on the task of trying to restore the viability of the University for Peace, headquartered in Costa Rica, established under authorization of the UN General Assembly.[18] The UN’s reputation was at risk as the organization had been subjected to severe mismanagement, misappropriation of funds and inoperative governance. As Chairman of its governing body, the Council, and initially as Rector, Strong led the process of revitalizing the University for Peace and helped to rebuild its programs and leadership. He retired from the Council in the spring of 2007.

From 2003 and 2005, Strong served as the personal envoy UN Secretary-General Kofi Annan to lead support for the international response to the humanitarian and development needs of the Democratic People's Republic of Korea.[19]

In 2005, during investigations into the U.N.'s Oil-for-Food Programme, evidence procured by federal investigators and the U.N.-authorized inquiry of Paul Volcker showed that in 1997, while working for Annan, Strong had endorsed a check for $988,885, made out to "Mr. M. Strong," issued by a Jordanian bank. It was reported that the check was hand-delivered to Mr. Strong by a South Korean businessman, Tongsun Park, who in 2006 was convicted in New York federal court of conspiring to bribe U.N. officials to rig Oil-for-Food in favor of Saddam Hussein. Mr. Strong was never accused of any wrongdoing.[20] During the inquiry, Strong stepped down from his U.N. post, stating that he would "sideline himself until the cloud was removed".

Shortly after this, Strong moved to an apartment he owned in Beijing.[20] He said that his departure from the U.N. was motivated not by the Oil-for-Food investigations, but by his sense at the time, as Mr. Annan's special adviser on North Korea, that the U.N. had reached an impasse. "It just happened to coincide with the publicity surrounding my so-called nefarious activities." He insists: "I had no involvement at all in Oil-for-Food . . . I just stayed out of it."[20]

Secretary-General of the United Nations Kofi Annan, near the end of his term, paid the following tribute to Maurice Strong:

Looking back on our time together, we have shared many trials and tribulations and I am grateful that I had the benefit of your global vision and wise counsel on many critical issues, not least the delicate question of the Korean Peninsula and China’s changing role in the world. Your unwavering commitment to the environment, multilateralism and peaceful resolution of conflicts is especially appreciated.

Maurice Strong has received a number of honours, awards and medals. He has received 53 honorary doctorate degrees and honorary visiting professorships at 7 universities.

Among the honours and awards:

Other honours and awards include: