The Painted Jezebel Delias hyparete is a medium sized butterfly of the Family Pieridae found in Asia. 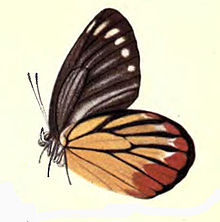 Closely resembles Delias eucharis but can be distinguished as follows : Male upper forewing has the black margins to the veins more diffuse ; the transverse postdiscal band diffuse, ill-defined, oblique, not parallel to termen in its lower portion but terminated at apex of vein 2 ; the apical portion of the wing beyond the fascia more or less so thickly shaded with black scales as to leave the white lanceolate spaces between the veins (so prominent in eucharis) ill-defined and obscure. Hind wing white, the black venation and terminal narrow black border as well as the sub-terminal vermilion-red spots between the veins on the underside show through by transparency. Underside : fore wing as in eucharis, but the black margins to the veins much broader and the postdiscal transverse fascia as on the upperside oblique but broader. Hind wing differs from that of eucharis in the much deeper chrome-yellow tint of the ground-colour, the postdiscal black curved band that in eucharis separates the yellow from the subterminal vermilion-red spots entirely wanting, the red spots themselves pointed inwardly, not subcordate, they conspicuously increase in size posteriorly. Antennae, head, thorax and abdomen similar to those of eucharis. Female differs from the female of eucharis on the upperside by the very much darker shading, especially on the fore wing, and by the postdiscal transverse band which is as in the d oblique but broader. Hind wing also more darkly shaded, the postdiscal transverse curved black baud entirely absent. Underside as in the female but darker, the fore wing especially more thickly shaded with black scaling, the preapical interspaces tinged with yellow. Antennae, thorax and abdomen similar to those in eucharis.

Race metarete, Butler. (Southern Myanmar; extending to Java and Sumatra. ) Differs from race hierta as follows : Male upperside has the ground-colour a much purer white ; apical half of fore wing in contrast with the white on basal half densely shaded with black scales. Underside : the colours clearer and purer, the chrome-yellow on the hind wing confined to the base and posterior half of the wing, the apical half of the cell and the anterior inter- spaces within the line of the vermilion-red spots pure white ; the anterior two or three subterminal red spots margined interiorly with diffuse black scaling. Female differs less from the 2 of hierta, but on the underside of the hind wing the yellow colour is as restricted as it is in the male; the subterrninal red spots are of a richer vermilion than in hierta, and the anterior two or three as in the d have an interior narrow margin of diffuse black scales. Antennae, head, thorax and abdomen as in hierta, but the thorax and abdomen shaded slightly darker with a bluish-grey appearance.

Race ethire, Doherty. (Madras ; Orissa ; Lower Bengal. ) Differs from typical hierta as follows: Male upperside very pure white. Fore wing has the black margins to the veins very narrow, the oblique postdiscal band ill-defined, scarcely any irroration of black scales on the apical half of the wing. Hind wing pure white, the colours of the underside seen through by transparency as in hierta. Underside differs from hierta principally in the brighter tint of the yellow on the hind wing, and in the more clearly defined, less diffuse black margins of the veins. Female differs less from female hierta than does the male from the corresponding sex of the same insect. Upperside has the interspaces beyond the postdiscal oblique band on fore wing and the cell and basal halves of the interspaces beyond the cell on the hind wing distinctly tinged with yellow. Underside : all the markings more neatly and clearly defined than in hierta, the inter-spaces beyond the oblique postdiscal band on the fore wing bright lemon-yellow. Antennae, head, thorax and abdomen in both sexes as in D. hierta.