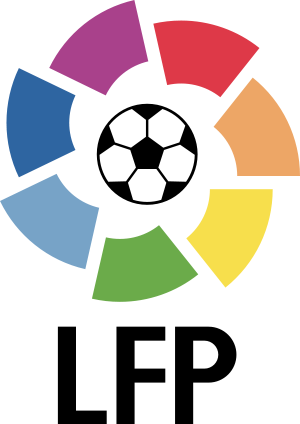 A total of 58 teams have competed in La Liga, nine of which have been crowned champions. Since the 1950s, Real Madrid and have dominated the championship. The former have won the title 31 times while the latter have won it on 18 occasions. However, during the 1930s and 1940s and in the last two decades, La Liga has seen other champions including , , Valencia, Sevilla, , and .

La Liga follows the usual double round-robin format. During the course of a season, which lasts from September to June, each club plays every other club twice, once at home and once away, for a total of 38 games. Teams receive three points for a win, one point for a draw, and no points for a loss. Teams are ranked by total points, with the highest-ranked club at the end of the season crowned champion. If points are equal between two or more clubs, head-to-head results usually determine their placement. The first tiebreaker used when two teams are even on points is the resulting from the two matches between the clubs in question. When more than two teams are tied, the points accumulated from the games between those teams are used to rank them, then goal difference if needed. If head-to-head results are not sufficient to separate teams, goal difference over the entire season, then total goals scored in the season may be used. [http://www.lfp.es/competiciones/2008-09/primera/reglamento.htm]

In April 1927 Jose Maria Acha, a director at , first proposed the idea of a national league in . After much debate about the size of the league and who would take part, the Real Federación Española de Fútbol eventually agreed on the ten teams who would form the first "Primera División" in 1928. , Real Madrid, , , and were all selected as previous winners of the . , and qualified as runners-up and qualified through a knockout competition. Only three of the founding clubs, Real Madrid, and , have never been relegated from the "Primera División".

When the Primera Liga resumed after the it was , and that initially emerged as the strongest clubs. were only awarded a place during the 1939-40 season as a replacement for , whose ground had been damaged during the war. The club subsequently won their first Liga title and retained it in 1941. While other clubs lost players to exile, execution and as casualties of the war, the team was reinforced by a merger. The young pre-war squad of had also remained intact and in the post-war years matured into champions, gaining three Liga titles in 1942, 1944 and 1947. They were also runners-up in 1948 and 1949. also enjoyed a brief golden era, finishing as runners-up in 1940 and 1942 before winning their only title to date in 1946. By the latter part of the decade began to emerge as a force when they were crowned champions in 1945, 1948 and 1949.

Although , previously known as "Atlético Aviación", were champions in 1950 and 1951 under "" mastermind , the 1950s saw the beginning of the FC Barcelona/Real Madrid dominance. During the 1930s, 1940s and 1950s there were strict limits imposed on foreign players. In most cases clubs could only have three foreign players in their squads, meaning that at least eight local players had to play in every game. During the 1950s, however, these rules were circumnavigated by Real Madrid and CF Barcelona who naturalised , and . Inspired by Kubala, Barça won the title in 1952 and 1953. Di Stéfano, Puskás and formed the nucleus of the Real Madrid team that dominated the second half of the 1950s. Real won "Primera División" for the first time as "Real Madrid" in 1954 and retained it in 1955. They were winners again in 1957 and 1958, with only interrupting their sequence. CF Barcelona with a team coached by and featuring Luis Suárez gained the title in 1959 and 1960..

The winning sequence was ended more significantly in 1981 when won their first ever title. They retained it in 1982 and their two in a row was followed by another by their fellow Basques, who won back-to-back titles in 1983 and 1984. led to a solitary title in 1985 before Real Madrid won again another five in a row sequence (1986-90) with a team, guided by , and including and the legendary "La Quinta del Buitre" - , Manolo Sanchís, Martín Vázquez, Míchel and Miguel Pardeza.

returned to as manager in 1988, and assembled the legendary "Dream Team". Cruyff introduced players like , , Txiki Beguiristain, Goikoetxea, , , and . This team won "Primera División" four times between 1991 and 1994 and won the European Cup in 1992. Laudrup then moved to arch-rivals Real Madrid after a fall-out with Cruyff, and helped them end Barcelona's run in 1995. won their ninth "Primera División" title in 1996 before Real Madrid added another Liga trophy to their cabinet in 1997. After the success of Cruyff, another Dutchman - Ajax manager - arrived at the , and with the talents of , Luis Enrique and , Barcelona again won the title in 1998 and 1999. Meanwhile, Real Madrid also experienced success on the intercontinental stage, winning the in 1998.

As "Primera División" entered a new century, the Big Two found themselves facing new challengers. Between 1993 and 2004, Deportivo La Coruña finished in the top three on ten occasions, a better record than either Real Madrid or , and in 2000, under , they became the ninth team to be crowned champions. Real Madrid won two more Liga titles in 2001 and 2003 and also the in 2000 and 2002, and won their third league title in 2007 after a three year drought. They were challenged by a re-emerging in both competitions. Under the management of , Valencia finished as Champions League runners-up in 2000 and 2001. His successor, , built on this and led the club to a Liga title in 2002 and a Liga/UEFA Cup double in 2004. The 2004-05 season saw a resurgent Barcelona, inspired by the brilliant , win their first title of the new century, in addition to the Liga-Champions League double in 2005-06. also won the UEFA Cup in 2006 and again in 2007, when the Andalusians defeated fellow Spaniards 3-1 on penalties. After 3 years Real Madrid finally won the La Liga in 2006-2007 and 2007-2008 season.

The Primera División is currently second in the UEFA rankings of European leagues based on their performances in European competitions over a five-year period, behind the English Premier League in first and ahead of Italy's in third. [cite news|url=http://www.xs4all.nl/~kassiesa/bert/uefa/data/method3/crank2009.html|title=UEFA ranking of European leagues|publisher=Bert Kassies|date=August 2008]

During the clubs such as Real Madrid and dropped the "Real" from their name, became "Donostia CF". In 1941, a decree issued by Franco banned the use of non- names. and became "CF Barcelona" and "Sevilla CF", both and changed the spelling of their prefix to "Atlético", and became "Real Gijón" and "Real Santander".

Many individual awards are conceded relating to La Liga, although not sanctioned by the LFP nor the RFEF they're widely regarded as official.

The most notable of them are the , awarded to the top scorer of the season, and the for the goalkeeper with the least "goals-to-games" ratio (with some extra rules, see the main article). Both trophies are awarded by the biggest sports newspaper in Spain, "Marca".

In 2008, a new trophy has been awarded to the best player in the league overall: the Di Stéfano Trophy, also created by "Marca". The 50 top players, chosen by visitors to Marca's official website every week of competition, made it into a final ballot, where a specialized jury, which included former football stars , , , , Spain's national team and , decided the final winner. The first edition was won by Real Madrid star , after three voting rounds since there was a tie between him and runner-up .