An image of Messier 81, a galaxy with a classical bulge. Notice that the spiral structure ends at the onset of the bulge.

Bulges that have properties similar to elliptical galaxies are often called classical bulges due to their similarity to the historic view of bulges.[1] These bulges are composed primarily of stars that are older population II stars, and hence have a reddish hue (see stellar evolution).[2] These stars are also in orbits that are essentially random compared to the plane of the galaxy, giving the bulge a distinct sperical form.[2] Due to the lack of dust and gasses, bulges tend to have almost no star formation. The distribution of light is described by de Vaucouleurs' law.

Classical bulges are thought to be the result of collisions of smaller structures. This disrupts the path of the stars, resulting in the randomness of bulge orbits. Also during the merger, gas clouds are more likely to be converted into stars, due to the shocks from the mergers (see Star Formation).

An image of Messier 63, a galaxy with a non-classical bulge. Notice that the spiral structure goes all the way to the center of the galaxy. 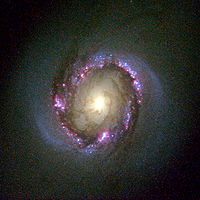 A Hubble Space Telescope image of the central region of NGC 4314, a galaxy with a star-forming nuclear ring.

Subsequent studies (using the Hubble Space Telescope) show that bulges of many galaxies are not devoid of dust, but rather show a varied and complex structure.[2] This structure often looks similar to a spiral galaxy, but is much smaller. Giant spiral galaxies are typically 2–100 times the size of those spirals that exist in bulges. When they exist these central spirals dominate the light of the bulge in which they reside. Typically the rate at which new stars are formed in pseudobulges is similar to the rates at which stars form in disk galaxies. Sometimes bulges contain nuclear rings that are forming stars at much higher rates than (per area) is typically found in outer disks, as shown in NGC 4314 (right).

These properties (such as spiral structure and young stars) suggest that some bulges did not form through the same process that made elliptical galaxies and classical bulges. Yet the theories for the formation of pseudobulges is less certain than those of classical bulges. Pseudobulges may be the result of extremely gas-rich mergers than happened more recently than those mergers that formed classical bulges (within the last 5 billion years). However, it is difficult for disks to survive the merging process, casting doubt on this scenario.

Many astronomers suggest that bulges that appear similar to disks form internally out of the disk, and are not the product of the merging process. When left alone disks galaxies can rearrange their stars and gas (as a response to instabilities). The products of this process (called secular evolution) are often observed in disk galaxies; both spiral disks and galactic bars can result from secular evolution of galaxy disks. Secular evolution is also expected to send gas and stars to the center of a galaxy. If this happens that would increase the density at the center of a galaxy, and thus make a bulge that has properties similar to disk galaxies.

If secular evolution, or the slow, steady evolution of a galaxy,[6] is responsible for the formation of a significant number of bulges, then that many galaxies have not experienced a merger since the formation of their disk. This would then mean that current theories of galaxy formation and evolution greatly over-predict the number of mergers in the past few billion years.[2]