Gabriel Knight
This article is about a video game series. For the UK radio DJ, see Gabe Knight. 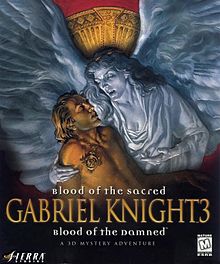 One compilation was released: Gabriel Knight Mysteries: Limited Edition. It included the first two games in the trilogy.

The Gabriel Knight characters and games were created by writer Jane Jensen, who also worked on King's Quest VI: Heir Today, Gone Tomorrow with veteran game designer Roberta Williams. All three games in the series focus on the adventures of Gabriel Knight, a New Orleans author and bookstore owner who finds that his destiny is to become a Schattenjäger, or "Shadow Hunter". Gabriel's assistant, sidekick, and sometime romantic interest Grace Nakamura is a major supporting character in Sins of the Fathers. In The Beast Within and Blood of the Sacred, Blood of the Damned, she shares the role of protagonist with Gabriel. The player alternates between Gabriel and Grace for different portions of each game.

With a balanced mix of historical facts and fictional elements, as well as an emphasis on character development (e.g. the relationship between Gabriel and Grace is an important subplot throughout the series), the Gabriel Knight games have been praised as outstanding achievements in storytelling. The music in the series, composed by Robert Holmes (Jensen's husband), contributes significantly to the atmosphere.

The first episode of the series was released in 1993. Its story unfolds over a sequence of "days", each of which has a required set of actions to be performed before proceeding to the next. In this way, the game proceeds mostly linearly, since the puzzles on a given "day" must be completed in order to reach the next day. However, within each day play may be nonlinear. A similar format was used throughout the series, with "days" replaced by "chapters" and "time blocks" in the later games. Each game also awards a number of "points" both for completing game required actions and for completing various optional puzzles along the way.

Gabriel Knight: Sins of the Fathers and Gabriel Knight 3: Blood of the Sacred, Blood of the Damned both included, along with the game media and documentation, graphic novels that contained back-story to the starting points in either game, much in the tradition of Infocom's "feelies".

The Sins of the Fathers graphic novel follows the story of Günter Ritter, an ancestor of Gabriel Knight, who has left his ancestral home for the American continent in the 17th century.

The Blood of the Sacred, Blood of the Damned graphic novel details the events immediately preceding the player's starting point in the game.

Gabriel Knight: Sins of the Fathers

The first game in the series introduces Gabriel Knight, a financially struggling horror novelist based in New Orleans. Gabriel is following a series of homicides, dubbed "The Voodoo Murders" for their apparent voodoo overtones hoping to use the police investigation, led by Detective Mosely, as the basis of a new novel. However, as he draws deeper into the investigation, and his shop assistant Grace Nakamura performs historical research for him, Gabriel links the murder spree both to New Orleans' voodoo past and towards the beautiful and mysterious New Orleans socialite, Malia Gedde.

Gabriel also discovers connections between the case and a horrific recurring nightmare which has plagued him all of his life. His investigation brings him into contact with Wolfgang Ritter, a lost family relative in Germany. Wolfgang informs Gabriel that his family has an ancient heritage in investigating supernatural evil and that Gabriel himself has inherited the mantle of Schattenjäger, a sort of modern day Inquisitor. Gabriel discovers that his nightmares are the result of a curse brought upon his family by one of his ancestors, and that only by embracing his calling and solving the Voodoo Murders can he undo it.

Gabriel travels to Germany and Africa, before returning to New Orleans to confront those responsible for the murders and his family's suffering. The climax ends with Gabriel choosing between love and forgiveness or fulfilling his duty, offering two different dénouements as a result.

The CD-ROM version featured voice talents of such well-known actors as Tim Curry as Gabriel, Mark Hamill as Mosely, Leah Remini as Grace, Efrem Zimbalist, Jr. as Wolfgang Ritter and Michael Dorn as Dr. John, a proprietor of a voodoo museum in central New Orleans.

The Beast Within: A Gabriel Knight Mystery

The second game (also known as Gabriel Knight 2: The Beast Within) follows Gabriel on his second Schattenjäger case. A year after the events of Sins of the Fathers, he has moved to his ancestral home in Bavaria, Germany to write his new novel. The population of Rittersberg, the seat of the Schattenjägers, are well aware of his family's reputation and when word reaches them of what is reported to be a werewolf attack in Munich, they compel Gabriel to go and investigate. Gabriel is joined in Germany by Grace, once she learns that he has begun a new case and hasn't asked her to join him. Whilst Gabriel follows a trail from missing zoo wolves to a mysterious men's hunting club in Munich, Grace conducts research back in Rittersberg and around Bavaria. Her investigations lead her to the history of King Ludwig II, the composer Richard Wagner and a shadowy figure known as the Black Wolf. Eventually the links between the cases become clear, and Grace discovers that the person in the greatest danger has become Gabriel himself.

The game was created using techniques developed in Phantasmagoria, with the characters and many objects captured in real-time video against blue screen backgrounds and appearing on "virtual sets" consisting largely of photographic backgrounds. Although this technique has come in for much criticism from games makers and players alike, The Beast Within was generally well received with the quality of the script and some of the performances coming in for particular praise. Dean Erickson plays Gabriel Knight and Joanne Takahashi plays Grace Nakamura.

The Beast Within was originally going to be much longer. Its original design indicated eight chapters rather than the published six, including one that required the player to act as Ludwig II and hide the Lost Opera in his castles. However, according to game designer Jane Jensen, the game ran over budget (almost a million dollars over its original three million dollar budget) and the required material could therefore not be filmed. It would also have taken up to nine CD-ROMs to incoporate all the additional story (the release version of the game shipped on six). This helps explain why there is a great deal of plot exposition in some of the cutscenes; particularly in the transition from Chapter Five to Six.[1]

Four years after the events of the second game, Gabriel and Grace are asked by the exiled Prince of Albany to protect his newborn son from a centuries old family threat which appears to be a group of vampires. Shortly afterwards, the boy is kidnapped and Gabriel follows the kidnappers to the mysterious French village of Rennes-le-Château. Gabriel's arrival coincides with that of a tour group; supposedly all in town hunting for a legendary local treasure linked to the Knights Templar, the Cathars and supposedly connected to the Holy Grail. Amongst the international tour group is Gabriel's old friend, Detective Mosely, from New Orleans. Gabriel's search leads him to investigate the members of the group and search the town. Grace arrives shortly afterwards and delves into the history of the area to try and find the connection between the kidnapping and the area's rich history. Together they uncover the truth behind an incredible mystery, stretching back to the birth of Jesus Christ.

A custom designed 3D engine, the G-Engine, was created to drive the game which allowed the player control of a free roaming camera to explore environments and to watch non-interactive sequences from any distance or angle. The creation of such an ambitious engine came at a price, however, and the game which was originally due for release in Summer 1998 didn't ship until Fall 1999 after changes in the design team and the decision to undertake a major rearchitecture of the engine halfway through production.[2] The detailed story was inspired in part by The Holy Blood and the Holy Grail book. Tim Curry also returned to voice Gabriel Knight.

Blood of the Sacred, Blood of the Damned received mixed reviews with the general gaming press being less enthusiastic about the game's merits than dedicated adventure gaming publications. As with the other games in the series, though, most reviews of the game cited Jane Jensen's story as a subject for praise. The game was profiled in an article on Old Man Murray in which the author uses a puzzle from the game to lambast the absurd puzzles of adventure games as a whole.[3] It is the last adventure game to be published to date by Sierra Entertainment.

The stories of Sins of the Fathers (ISBN 0-451-45607-6) and The Beast Within (ISBN 0-451-45621-1) were adapted into novels by Jane Jensen. The first is a straightforward adaptation of the events of the game, an approach which Jane Jensen decided, in retrospect, was not the most successful way of introducing Gabriel Knight to a literary audience. For the second novel she "threw the whole idea of the game away and started again from scratch."[4] Both books are out of print as of 2010.

In 1998, Sierra released the title Gabriel Knight Mysteries: Limited Edition, which contained the first two games in the trilogy. While it lacked the previous support for Macintosh for these two games, it included a graphical novel for, the then upcoming, Gabriel Knight 3: Blood of the Sacred, Blood of the Damned, the novel adaption of the first game and the soundtrack for the second game.

However, no Gabriel Knight 4 has been announced. In August 2006 it was confirmed that Jane Jensen's next adventure game project would not be a new Gabriel Knight but the revival of Gray Matter,[6] a game which was released in German speaking territories in November 2010 , and released internationally in February 2011.[7]