Boa dumerili is a non-venomous boa species found on Madagascar and Reunion Island. No subspecies are currently recognized.[3] 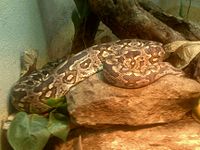 B. dumerili in the London Zoo.

Adults usually grow to 6.5 feet (2 m) in length[4] with the maximum reported to be 8 foot, 6 inches (259 cm). Males usually have longer flatter tails, while females tend to be larger overall.

The color pattern consists of a gray-brown ground color with darker patches, forming an effective camouflage against the leaf litter of the forest floor of their native habitat.

Along the western coast and southwestern regions of Madagascar, it is found in a semi-arid habitat that gets fairly low amounts of precipitation.

This species is classified as vulnerable (VU) on the IUCN Red List for the following criteria: A1cd (v2.3, 1994).[5] This means that a population reduction of at least 20% has been observed, estimated, inferred or suspected over the last 10 years or three generations, whichever is the longer, based on a decline in area of occupancy, extent of occurrence and/or quality of habitat, and based on actual or potential levels of exploitation. Year assessed: 1996.[6]

Also listed as CITES Appendix I, which means that it is threatened with extinction and CITES prohibits international trade except when the purpose of the import is not commercial, for example for scientific research.[7]

Threatened by deforestation and human persecution. In some areas it is feared and often killed on sight.

Their diet consists of small animals, such as birds, lizards, and small mammals. They are also known to prey on other snakes.

Once exported from Madagascar in great numbers, trade in this species has since been heavily restricted. They are, however, quite prolific in captivity, and captive bred animals are relatively inexpensive and easy to find in the exotic pet trade. Though their size makes them more suited to someone experienced with large constrictors, they have a typically docile nature, and readily feed on rats. The main concern is that they are prone to stress, which can sometimes cause them to stop eating or contribute to other health issues.