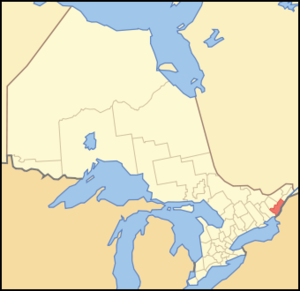 They were formed by the administrative union of the historical counties of Leeds and Grenville in 1850.

William Buell granted the land for construction of the Courthouse. It is set atop a hill rising from the Saint Lawrence River. A broad boulevard extends to the main street. The Brockville Courthouse, one of the oldest in Ontario, was erected in 1842. The original plan had been to build a courthouse in the township of Johnstown but the land there was too swampy for construction. Instead, the Courthouse was built in the township of Elizabethtown.

The figure of Justice, a blind-folded woman holding the scales of justice, was carved by master carpenter William Holmes in 1844. This statue was named "Sally Grant" by Paul Glasford, the chair of the building committee, in honour of the woman who posed as the model. It was erected in 1845. However, the statue was damaged by and by 1956, the statue was rotting. The original statue is on display at the Westport museum. A replica carved by Robert Kerr of Smiths Falls was placed atop the Courthouse in 1982.

The city of Brockville and towns of Gananoque and Prescott are separated from the county administration, but remain part of the county for census purposes.