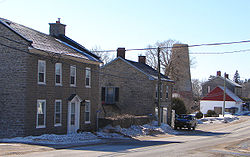 Maitland is a community of approximately 1800 residents, about 5 km east of the city of Brockville, in Ontario, Canada. It is located on the shores of the Saint Lawrence River in the township of Augusta. The small village enjoys a rich history dating to the times of British colonialism. The village was founded as a small naval base and supply port in Upper Canada.

Today, the village is home to Dupont, Invista Canada, Nitrochem, Prax-Air and Andrews Family Music. While the village contains a wide range of citizens, most people in the community are from middle and high socio-economic classes. Currently several large construction projects are taking place in Maitland including the new Brock Landings development on the old Grenville Christian College Campus, Old Orchard Estates housing development phase 2, and the ramping up of production at Dupont Canada's Maitland site.

Maitland was the site of a shipyard during the latter half of the 18th century. The economic development of the community was enabled by a convenient point of access to the Rideau area. The community flourished during the construction of the canal between 1826 and 1832. The attractive village still contains many early buildings.[1]

The "Iroquoise" amd "Outaouaise", the last two French warships that navigated Lake Ontario, were built at Maitland, at a location then known as Pointe au Baril. The site was designated a National Historic Site of Canada in 1923, and is marked by a stone cairn.[2][3]

The village is broken up into seven distinct neighbourhoods.

Maitland's newest subdivision is located along Highway #2 on the Western edge of the village. With superior views of the river and over 20 new homes already constructed, this subdivision is in phase 2 of the construction in 2011.

The original village of Maitland lies just north of the Saint Lawrence River. Many of its 19th-century homes have been restored, and the streets have a distinct style reminiscent of Upper Canada in its golden days.

The MacLean Subdivision lies north-west of the old village and contains approximately 100 homes from the 1960s and 1970s.

The Kemp Subdivision lies north of Highway 401 and contains around 40 homes from the 1960s and 1970s. This older subdivision has quick access to the 401 and is close to one of Canada's 3 specialized goaltending arenas "Gold in the Net".

Maitland Estates lies north-east of the old village and south of the 401. This executive style subdivision has spacious lots and has been singled out as the best subdivision in the Brockville Area to raise a family with countless community groups, sports clubs for youth and the MERC (Maitland Education & Recreation Committee) operating within this neighbourhood. The neighborhood is also famous for its Älight at Night" Christmas celebration where all homeowners light their properties with numerous candles roadside on Christmas Eve which brings in visitors from all over the area. Homes in this subdivision are from the 1970s 1980s and 1990s.

Maitland by the Trails

Maitland by the Trails is an executive-style subdivision of 25 homes located north of the old village. Homes in this area are quite large on spacious lots. A possible expansion of this subdivision is being examined with new development to the West of the present subdivision.

The Community of Brocks Landing is located west of the village on the former Grenville Christian College (GCC) Campus. GCC closed its doors in August 2007 and remained vacant for over two years. After several unsuccessful attempts to sell the property (including finally a sale only to be resold again a under power of sale), it was sold to a developer who renamed it "Brocks Landing". The developer will renovate and convert the property to a community of rental Town homes, Condominiums, a Sports facility, Restaurant and Conference Centre complete with a church. The final cost of the redevelopment is estimated to be upwards of 10 million Canadian dollars.

The last of Maitland's subdivisions in Lion's Gate. Located just west of the village past The Community of Brocks Landing, (The Former Grenville Christian College Campus) on Highway 2, this estate style subdivision of 25 properties has some of the largest homes in Eastern Ontario. With oversized lots, excellent views of the river.

The village has claimed a certain fame by the success of the young athletes in the community, especially running. Over 15 youths from the village have attained full NCAA scholarships to U.S. universities in Track & Field or Cross Country. As well, Canada's top female marathoner and one of Canada's top female triathletes also were raised in the village. The top high school cross country runner in Canada also presently lives in the Kemp subdivision and attends high school in Brockville.

The village is also served by a convenience store, post office, seasonal chip stand and a private investigations firm.